Industry officials have complained that the proposed changes are not practical would cost billions of dollars more than projected. 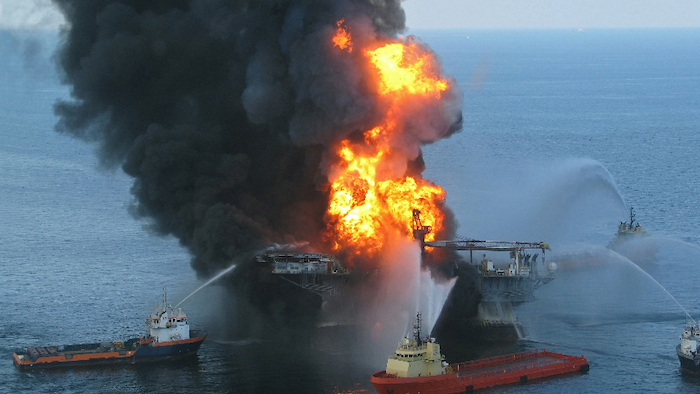 The U.S. Chemical Safety Board investigates major industrial accidents. It is concluding a long-running probe into the catastrophic blowout of a BP well six years ago in the Gulf of Mexico that killed 11 workers and injured many others.
Wikipedia

NEW ORLEANS (AP) — Companies that drill for oil and gas in U.S. waters should be required to work more closely with rig workers and regulators, as they do in Norway and the United Kingdom, to reduce the risk of accidents, the U.S. Chemical Safety Board says.

The board investigates major industrial accidents. It is concluding a long-running probe into the catastrophic blowout of a BP well six years ago in the Gulf of Mexico that killed 11 workers and injured many others. The out-of-control leak also dumped millions of gallons of oil into the Gulf of Mexico

On Thursday the Obama administration was planning to issue a final rule to improve the safety of offshore oil drilling equipment. Federal investigators blamed a faulty blowout preventer for the 2010 spill and called for stronger regulations of equipment that prevents oil and gas from rushing to the surface.

Industry officials have complained that the proposed changes would cost billions of dollars more than projected.

Regulators have forced the industry to comply with a new set of safety management rules, but the CSB called this "performance-based" protocol weak. It also said the regulations fail to cover contractors, a major segment in offshore work.

"What we're worried about is how do we make the industry do what they're putting on paper," said Cheryl MacKenzie, a CSB investigator.

She said safety gaps could be filled by giving the Bureau of Safety and Environmental Enforcement — the offshore regulator — more power to "challenge companies and verify that they are doing what they said they would do."

CSB also recommended getting workers more involved in safety decisions, for instance by letting workers elect worker representatives to be part of discussions over safety.

"These are the people who have their hands on the equipment," MacKenzie said. "They need to be involved ... This is not a CSB tenet, this is a well-known concept."

The CSB report said there were lessons to learn from places like Norway and the United Kingdom.

In a statement, Vanessa Allen Sutherland, the CSB chairwoman, called on the industry and the federal government to take "a tripartite" approach where workers, companies and regulators are entwined in improving safety.

"Ultimately, this will require a culture shift for everyone," Sutherland said.

Ken Arnold, an expert on offshore drilling and member of the National Academy of Engineering, said the industry, through an American Petroleum Institute committee, is looking at revising the industry's safety standards. He said more oversight of contractors is being considered.

However, he questioned the practicality of some of the CSB's recommendations.

For instance, he said U.S. offshore workers are not unionized and are "culturally anti-union." He said it would be difficult to duplicate the safety regimes of Norway and the U.K.

"In the U.S. we have a system that is a blame culture," he said. "Norway and the U.K. have a culture of working with industry to make things better rather than focus on who to blame. We have to work within the culture of the United States."

He added that since the BP disaster BSEE, the offshore regulator, has set up a system for whistleblowers to alert regulators to problems.

He said the U.S. offshore industry is making progress on safety.