On May 30, 2020 at 3:22 pm, NASA's Commercial Crew Program will usher in a new era of space exploration to the Space Coast of Florida. The launch marks the first time that Americans will launch from U.S. soil since the conclusion of the Space Shuttle Program in 2011.

According to the AP, SpaceX has a split-second launch window, and forecasters put the odds of acceptable launch weather at 40%.

SpaceX will send NASA astronauts, Bob Behnken and Doug Hurley, on a test mission to help prove their systems meet NASA’s requirements for certification to carry astronauts to the International Space Station, and back.

The SpaceX Crew Dragon spacecraft will launch on a Falcon 9 rocket from NASA’s Kennedy Space Center in Florida. The Crew Dragon is scheduled to dock to ISS at approximately 11:29 a.m. on Thursday, May 28.

This will be SpaceX’s final flight test for NASA’s Commercial Crew Program and will provide data on the performance of the Falcon 9 rocket, Crew Dragon spacecraft and ground systems, as well as in-orbit, docking and landing operations.

The flight test also will provide valuable data toward NASA certifying SpaceX’s crew transportation system for regular flights carrying astronauts to and from the space station. SpaceX is readying the hardware for the first rotational mission, which would happen after data from this mission is reviewed for NASA’s certification. 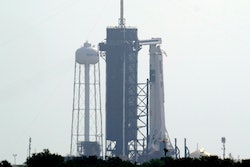