It flies like a rocket ship, and floats like a a shuttlecock. Also, how to hold your own brain, and an electric motorcycle with a 300-mile range.

You Can Hold Your Own Brain

Dr. Steven Keating 3D printed a copy of his skull and brain with very fine detail. He had a good reason, he had a tumor the size of a baseball in his brain.

When Keating was a student at MIT, he was interested to see what his brain looked like before the tumor was removed, he thought that it would help him understand his treatment options, so he took his MRI and CT scans, and started 3D printing. But there was a problem, the images are so detailed that they need to be converted into surface meshes in order to be printed.

There are two ways to do this, the first is a process is called "segmentation" where a radiologist manually traces every single slice. That could be up to 320 slices, and a lot of time spent tracing. The other method is called automatic "thresholding" and it is faster, but often removes critical details. Even though the scans have various grades of gray, it changes them to solid black or white pixels.

Keating and a team of collaborators from MIT, Harvard’s Wyss Institute, and Stratasya found a way to print these scans with dithered bitmaps. Basically, shades of gray. It's similar to the way newspapers print images, instead of various shades of gray, it sees the images as a a mix of black and white pixels. It seems simple, but the method cuts a workload that would take 30 hours and can do it in less than an hour. That time also translates to costs that were, until now, highly prohibitive.

The hope is that 3D printing can become a more viable tool for routine exams, diagnoses, as well a patient education and understanding of the human body.

The researchers predict that within 5 years, it could be common for patients to receive a 3D-printed anatomical model to help discuss treatment plans.

Mankame Automotive has made an electric motorcycle that can reach speeds of 155 mph and has a range of more than 300 miles. It's impressive given that most electric bikes do about half of that.

According to the Indian manufacturer, the bike will have a 40 kW 8,000 rpm electric motor.

The company hopes to jumpstart marketing efforts with an Indiegogo Campaign that is set to go live on the crowdfunding site on July 1st. So you can help fund it, or the owners cocaine-fueled prostitute binge — I mean, we all remember Skully, which burned about 2,000 backers who never saw their investment come to fruition.

The company is promoting an 18.4 kWh battery pack that weight about 176 lbs, almost half of the total 396 lbs.

Again, this is all contingent on first a crowdfunding campaign if you want to get in on the ground level, but then you have to wait for this concept to become a prototype, and then eventually manufactured, which the company thinks it can do within the next four years. Not bad, you know, as long as they don't blow it all on hookers and blow.

This week, Virgin Galactic and The Spaceship Company teams returned to the Mojave Desert in California for the VSS Unity's second supersonic rocket-powered test flight.

The tourism spaceship, after it was released from WhiteKnightTwo, fired its motor for 31 seconds and reached an altitude of 114,500 feet and speeds of Mach 1.9 (1,446 mph) before it glided to a landing at Mojave Air and Space Port.

The company still has a ways to go if it is going to offer actual "space" tourism, as space starts at 264,000 ft, according to the U.S. Air Force. The landing is also significant as it used the plane's re-entry feathering system which prematurely deployed in 2014 during a fatal test flight. The feathering system works so that the spacecraft drifts down to to earth likes a badminton shuttlecock before it glides to a stop.

What is significant is that the test came less than two months after the first flight held on April 5th. The quick turnaround, to which Virgin credits the maintenance and engineering staffs, will help the company come closer to its goal of regularly flying the VSS for deep-pocketed space tourists.

For this flight, the vehicle carried passenger seats and related equipment. Those passenger seats might soon be filled as, according to Richard Branson, the company's founder, the spacecraft could reach the 264,000 threshhold in two to three flights. He also plans to be the first passenger, so let's make sure they get everything right. 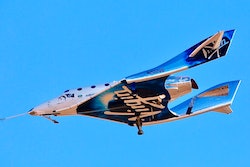 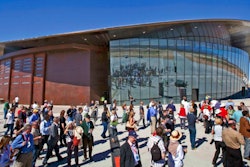