This $1.9M Harley is World's Most Expensive Motorcycle

You've truly made it when your greatest technical challenges is how to mount diamond rings to hand grips. Also, reverse engineering snake skin and drone motherships.

Engineers are looking for ways to improve textured surfaces, this includes anything from prosthetic joints to engine cylinder liners and even shoes. As a result, one man from Drexel University's College of Engineering is studying snake skin to inspire custom surface design.

Hisham Abdel-Aal is a mechanical engineer with expertise in tribology, the study of friction, and he refers to his work as "bio-inspired surface engineering." It could lead to products that more efficiently slip and stick. Nature has inspired many areas of engineering and design, everything from robotics to aircraft, but tribology has been overlooked.

The engineer studied 350 snake skins from 40 different species. He mapped and reverse-engineered the skins. He found that engineering research from the last 25 years pretty much came to the same design solution evolved in snakes over millions of years. This proves that evolution has nothing on humans when it comes to time-to-market, and that humans could've sped things up a bit had they just looked to the scales a little sooner.

Still, the work is being used to improve surface design. Collaborators in Colombia designed and tested a surface for a prosthetic hip joint using data gleaned from Royal Python skin. Researchers in the U. K. are developing texturing schemes for tool inserts used in dry machining of titanium that maximize friction while minimizing residual heat in the process. And German engineers built snake-inspired cylinder liners that allow the surfaces to minimize friction whether its moving forward or backward.

Abdel-Aal will continue publishing his datasets so engineers can continue to use them, but he hopes to build an algorithm that can more seamlessly fit into the surface design process.

As part of the five-year project, FAU researchers will develop a multi-sensor perception, collision avoidance, simultaneous localization and mapping system (also called SLAM), and improve low-level control in adverse weather conditions. The motherships will not only charge the drones, but also allow aerial and underwater drones to transfer data.

FAU is no stranger to work with the Navy, the schools Naval Engineering Education Consortium which includes work with two unmanned underwater vehicles that look for objects on the bottom of the sea.

The obvious benefits to unmanned vehicles include far less cost to operate and maintain, as well as the ability to maintain near-constant awareness and coverage of an environment.

At $1.9 Million, This is the World’s Most Expensive Motorcycle … Of Course it’s a Harley

Bucherer is first known as a Swiss watch company, but that doesn't mean that it doesn't dabble in exotic commissions. Most recently, the company built the world's most expensive motorcycle, the Harley-Davidson Blue Edition, which took a team of eight more than 2,500 man hours to build ... and costs $1.9 million.

The company collaborated with Swiss custom Harley workshop Bündnerbike to create an iridescent cruiser that has 360 diamonds, gold plated screws, as well as a custom watch behind bulletproof glass in the gas tank.

Based on a Harley-Davidson Softail Slim S, every metal element found on this one-of-a-kind motorcycle has been welded, beaten, ground and polished by hand.

How did they give it that shimmer? The engineers first plated the entire motorcycle in silver, then applied six color coatings using a proprietary method.

You know that you’ve made it as a designer when one of your greatest technical challenges on a project was how to mount diamond rings to the hand grips. They also put a pair of diamond rings on the forks, and another larger ring on the left half of the tank. You might want to spring for a sidecar with an armed guard, though I suppose budget really isn’t a concern if you’re in the market for the Blue Edition.

Both the custom watch, which includes design elements from the motorcycle and will keep time even if the motorcycle isn’t ridden, and 5.4-carat diamond ring are kept in retractable safes within the tank. 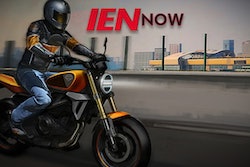 Smaller Harley to Debut in China 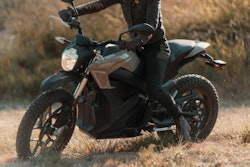