It was going 65 mph when it crashed. Also, cloning monkeys (and maybe humans), and Bugatti's 3D-printed car parts.

Cloned Monkeys Could Be Key to Cloning Humans

The human race is one step closer to being cloned. This week, scientists from the Chinese Academy of Sciences announced that they had cloned a pair of monkeys, Zhong Zhong and Hua Hua that are now about seven- and eight-weeks-old. They used the same cloning method that created Dolly, the controversial cloned sheep that was born in 1996.

Scientists have cloned many animals in the past, including dogs, cats, and pigs, but until now they haven’t had any luck cloning primates.

The cloning process serves as a proof-of-concept that cloning humans is possible, however the scientists insist that they have no intention of attempting such a feat, after all, the thought seems pretty universally reviled. According to the scientists, the cloned macaque monkeys will be used for medical research.

The cloning process isn't quite perfected yet, it took the researchers 127 eggs to create the two macaques. And they're still unable to clone adult monkeys - if you recall, Dolly was cloned from a mature sheep.

Next, the researchers plan to combine cloning with gene editing, creating monkeys with crippling human diseases. The research could lead to new ways to fight against illnesses like Alzheimer's and Parkinson's.

High-end car manufacturer Bugatti has created the world's largest functioning titanium component that was made with a 3D printer. The French car manufacturer designed the new eight-piston monobloc brake caliper, which also happens to be the largest brake caliper in the auto industry. The company plans to trial the parts which could eventually be rolled out to the entire Volkswagen Group and its brands.

The caliper is made from a titanium alloy that is typically reserved for the aerospace industry, found in wing components and rocket engines. Far too often, 3D printed parts are pigeon-holed as components with inferior strength. These parts have a tensile strength of 1,250 N/mm2, that means that you could apply 125 kg of force to a square millimeter without breaking it. The part is also significantly lighter than its aluminum counterparts, shedding about 40% of previous caliper's weight.

Time is still a factor. While 3D printing made it possible to go from concept to part in three months, it still took 45 hours to print the caliper. It was made on a custom 3D printer at the Fraunhofer Institute for Additive Production Technologies, Bugatti's partners, using laser deposition technology.

The company plans to continue to work on new production processes that could be rolled into its manufacturing operations, and have even experimented with using 3d printing to make aluminum components used for windshield wipers.

The U.S National Highway Traffic Safety Administration is currently investigating an accident in which a Tesla Model S slammed into a fire truck while in autopilot mode. According to multiple reports, the Tesla was going about 65 mph when it rear-ended a firetruck on a California freeway, luckily everyone walked away uninjured. The fire truck was actually helping another accident when it became involved with one of its own.

The semi-autonomous 'autopilot' mode has been blamed for a number of crashes and even a death when a man crashed into a tractor-trailer in May 2016. The company has said that it continues to make improvements to the system in an effort to reduce the number and severity of the crashes.

In the past, Tesla CEO Elon Musk has said that negative publicity regarding Autopilot crashes that dissuade people from using autonomous vehicles were "killing people," the idea being that autonomous cars could eventually be at least twice as safe, less accident prone, than when humans are at the helm. So, I suppose that he reads news of the crash and goes all Tyler Durden,"You wanna make an omelet, you got to break some eggs." 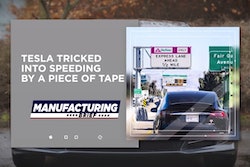