Did Pony.ai try to buck the system?

In this April 7, 2021 file photo, a Waymo minivan moves along a city street as an empty driver's seat and a moving steering wheel drive passengers during an autonomous vehicle ride in Chandler, Ariz. A small maker of autonomous vehicle systems could be in hot water with U.S. highway safety regulators over how quickly it reported the crash of a test vehicle last fall. The National Highway Traffic Safety Administration says in documents released Monday, March 28, 2022 that it's investigating Pony.ai's reporting of an Oct. 28 crash in Fremont, California.
AP Photo/Ross D. Franklin

DETROIT (AP) — A small maker of autonomous vehicle systems could be in hot water with U.S. highway safety regulators over how much time elapsed before it reported the crash of one of its test vehicles last fall.

The National Highway Traffic Safety Administration says in documents released Monday that it's investigating Pony.ai's reporting of an Oct. 28 crash in Fremont, California, about two weeks after it occurred.

A software error caused one of the company's autonomous test vehicles to crash into a median road sign. Recall documents filed by the company say there were no injuries or other property damage.

The agency says it opened the investigation to see whether Pony.ai complied with reporting requirements under a general order issued last June to all manufacturers testing autonomous vehicles, or those with driver-assist systems that need human supervision.

The order to requires reporting of crashes involving injuries, air bag deployment or a vehicle being towed away within one day of getting notice of a crash. Manufacturers must report lesser crashes involving autonomous vehicles on the 15th day of the month following the crash.

NHTSA investigation documents say Pony.ai reported the October crash on Nov. 12, and filed further reports on Nov. 17 and 29, and another in December. It's not clear if the airbags inflated or if the test vehicle was towed.

Pony.ai, which is based in Fremont, said in a prepared statement that it made a good-faith effort to comply with NHTSA requirements and has been cooperating with the agency. The company said it fixed the software the day after the crash, and that it only affected three of the 200 vehicles in its fleet.

NHTSA said in documents that the investigation was opened to determine if the company complied with the order “with respect to both the timeliness and accuracy of its reports regarding the Oct. 28, 2021 crash.”

The agency is using the order to collect data on autonomous and partially automated vehicles as it considers drafting regulations. 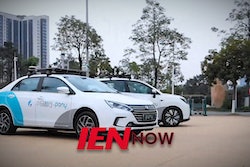