An Asteroid Impact Could Wipe Out an Entire City 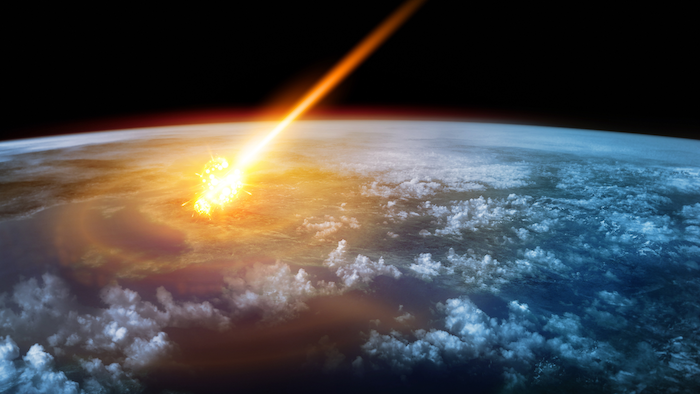 The Earth exists in a dangerous environment. Cosmic bodies, like asteroids and comets, are constantly zooming through space and often crash into our planet. Most of these are too small to pose a threat, but some can be cause for concern.

As a scholar who studies space and international security, it is my job to ask what the likelihood of an object crashing into the planet really is – and whether governments are spending enough money to prevent such an event.

To find the answers to these questions, one has to know what near-Earth objects are out there. To date, NASA has tracked only an estimated 40% of the bigger ones. Surprise asteroids have visited Earth in the past and will undoubtedly do so in the future. When they do appear, how prepared will humanity be? 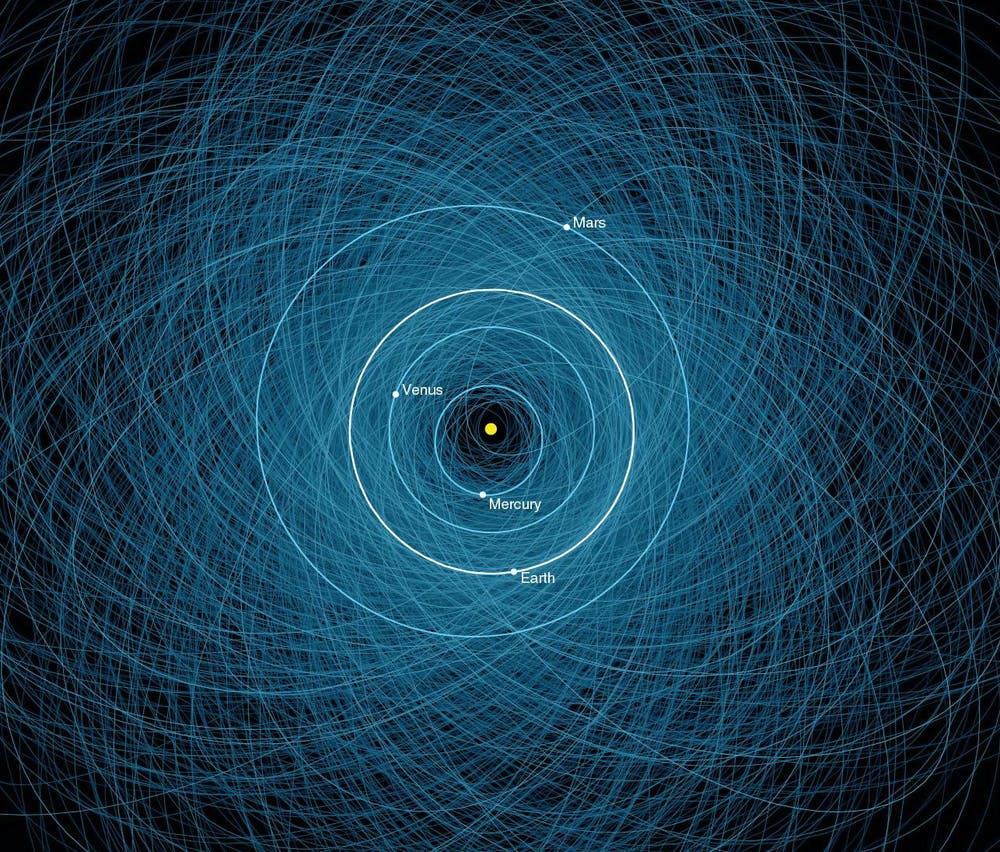 The orbits of thousands of asteroids (in blue) cross paths with the orbits of planets (in white), including Earth’s.NASA/JPL

The threat from asteroids and comets

Millions of objects of various sizes orbit the Sun. Near-Earth objects include asteroids and comets whose orbits will bring them within 120 million miles (193 million kilometers) of the Sun.

Astronomers consider a near-Earth object a threat if it will come within 4.6 million miles (7.4 million km) of the planet and is at least 460 feet (140 meters) in diameter. If a celestial body of this size crashed into Earth, it could destroy an entire city and cause extreme regional devastation. Larger objects - 0.6 miles (1 km) or more - could have global effects and even cause mass extinctions.

The most famous and destructive impact took place 65 million years ago when a 6-mile (10-km) diameter asteroid crashed into what is now the Yucatán Peninsula. It wiped out most plant and animal species on Earth, including the dinosaurs.

But smaller objects can also cause significant damage. In 1908, an approximately 164-foot (50-meter) celestial body exploded over the Tunguska river in Siberia. It leveled more than 80 million trees over 830 square miles (2,100 square km). In 2013, an asteroid only 65 feet (20 meters) across burst in the atmosphere 20 miles (32 km) above Chelyabinsk, Russia. It released the equivalent of 30 Hiroshima bombs worth of energy, injured over 1,100 people and caused US$33 million in damage. 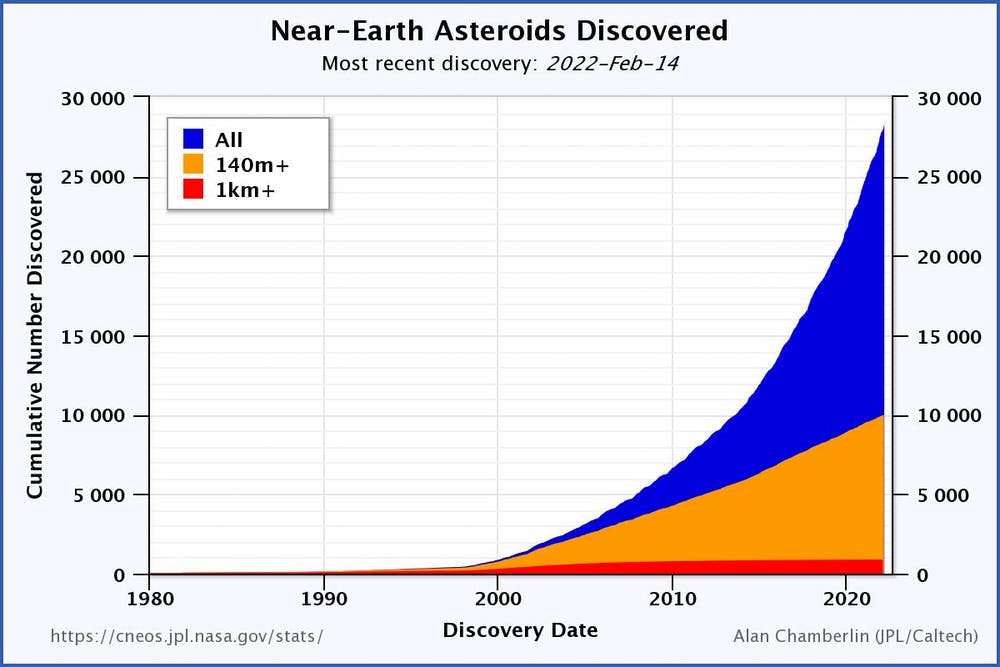 NASA has been steadily finding and tracking near-Earth objects since the 1990s.NASA/JPL-Caltech, CC BY

While the chances of a larger cosmic body impacting Earth are small, the devastation would be enormous.

Congress recognized this threat, and in the 1998 Spaceguard Survey, it tasked NASA to find and track 90% of near-Earth objects 0.6 miles (1 km) across or bigger within 10 years. NASA surpassed the 90% goal in 2011.

In 2005, Congress passed another bill requiring NASA to expand its search and track at least 90% of all near-Earth objects 460 feet (140 meters) or larger by the end of 2020. That year has come and gone and, mostly due to a lack of financial resources, only 40% of those objects have been mapped.

A new mission, funded by Congress in 2018, is scheduled to launch in 2026 an infrared, space-based telescope – NEO Surveyor – dedicated to searching for potentially dangerous asteroids.

We can only prevent a disaster if we know it is coming, and asteroids have sneaked up on Earth before.

Research suggests that one reason may be that Earth’s rotation creates a blind spot whereby some asteroids remain undetected or appear stationary. This may be a problem, as some surprise asteroids do not miss us. In 2008, astronomers spotted a small asteroid only 19 hours before it crashed into rural Sudan. And the recent discovery of an asteroid 1.2 miles (2 km) in diameter suggests that there are still big objects lurking. 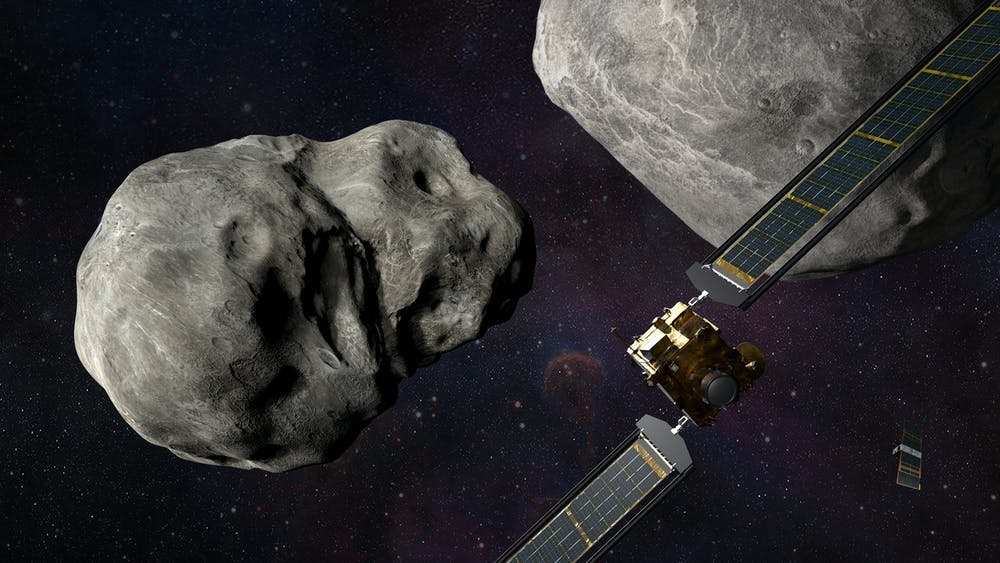 NASA’s DART mission will crash a small spacecraft into the double asteroid Didymos to see if it will change the asteroid’s orbit.NASA/JHUAPL/Steve Gribben

What can be done?

To protect the planet from cosmic dangers, early detection is key. At the 2021 Planetary Defense Conference, scientists recommended a minimum of five to 10 years’ preparation time to mount a successful defense against hazardous asteroids.

If astronomers find a dangerous object, there are four ways to mitigate a disaster. The first involves regional first-aid and evacuation measures. A second approach would involve sending a spacecraft to fly near a small- or medium-sized asteroid; the gravity of the craft would slowly change the object’s orbit. To change a bigger asteroid’s path, we can either crash something into it at high speeds or detonate a nuclear warhead nearby.

These may seem like far-fetched ideas, but in November 2021, NASA launched the world’s first full-scale planetary defense mission as a proof of concept: the Double Asteroid Redirection Test, or DART. The large asteroid Didymos and its small moon currently pose no threat to Earth. In September 2022, NASA plans to change the asteroid’s orbit by crashing a 1,340-pound (610 kg) probe into Didymos’ moon at a speed of approximately 14,000 mph (22,500 kph).

Learning more about what threatening asteroids are made of is also important, as their composition may affect how successful we are at deflecting them. The asteroid Bennu is 1,620 feet (490 meters) in diameter. Its orbit will bring it dangerously close to Earth on Sept. 24, 2182, and there is a 1 in 2,700 chance of a collision. An asteroid of this size could wipe out an entire continent, so to learn more about Bennu, NASA launched the OSIRIS-Rex probe in 2016. The spacecraft arrived at Bennu, took pictures, collected samples and is due to return to Earth in 2023.

This budget supports a number of missions, including the NEO Surveyor at $83 million, DART at $324 million and Osiris Rex at around $1 billion over several years.

Is this the right amount to invest in monitoring the skies, given the fact that some 60% of all potentially dangerous asteroids remain undetected? This is an important question to ask when one considers the potential consequences.

Investing in planetary defense is akin to buying homeowners insurance. The likelihood of experiencing an event that destroys your house is very small, yet people buy insurance nonetheless.

If even a single object larger than 460 feet (140 meters) hits the planet, the devastation and loss of life would be extreme. A bigger impact could quite literally wipe out most species on Earth. Even if no such body is expected to hit Earth in the next 100 years, the chance is not zero. In this low likelihood versus high consequences scenario, investing in protecting the planet from dangerous cosmic objects may give humanity some peace of mind and could prevent a catastrophe.

This article is republished from The Conversation under a Creative Commons license. Read the original article here: https://theconversation.com/an-asteroid-impact-could-wipe-out-an-entire-city-a-space-security-expert-explains-nasas-plans-to-prevent-a-potential-catastrophe-177023.