How do they get it done? 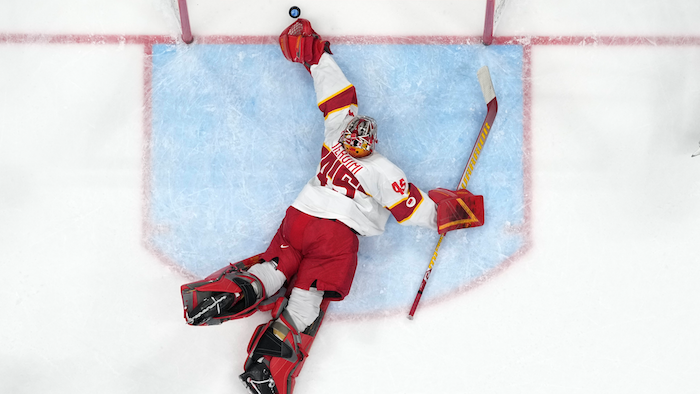 BEIJING (AP) — A figure skater framed only by ragged ice gazes up, almost beseechingly. A goaltender sprawls inside a net, defeat written all over his limbs, even with his face obscured.

These Renaissance painting-like images capture the barrage of emotions evoked during Winter Olympics competition. The key behind them? Robots.

The images don't read “(AP Photo/Robot),” though. Good old-fashioned photography skills and instinct are integral to making them.

The five members of the International Olympic Photo Pool — Reuters, Getty Images, Agence France-Presse, Xinhua and, of course, The Associated Press — all employ robotics to augment their wire offerings.

How do they get it done? 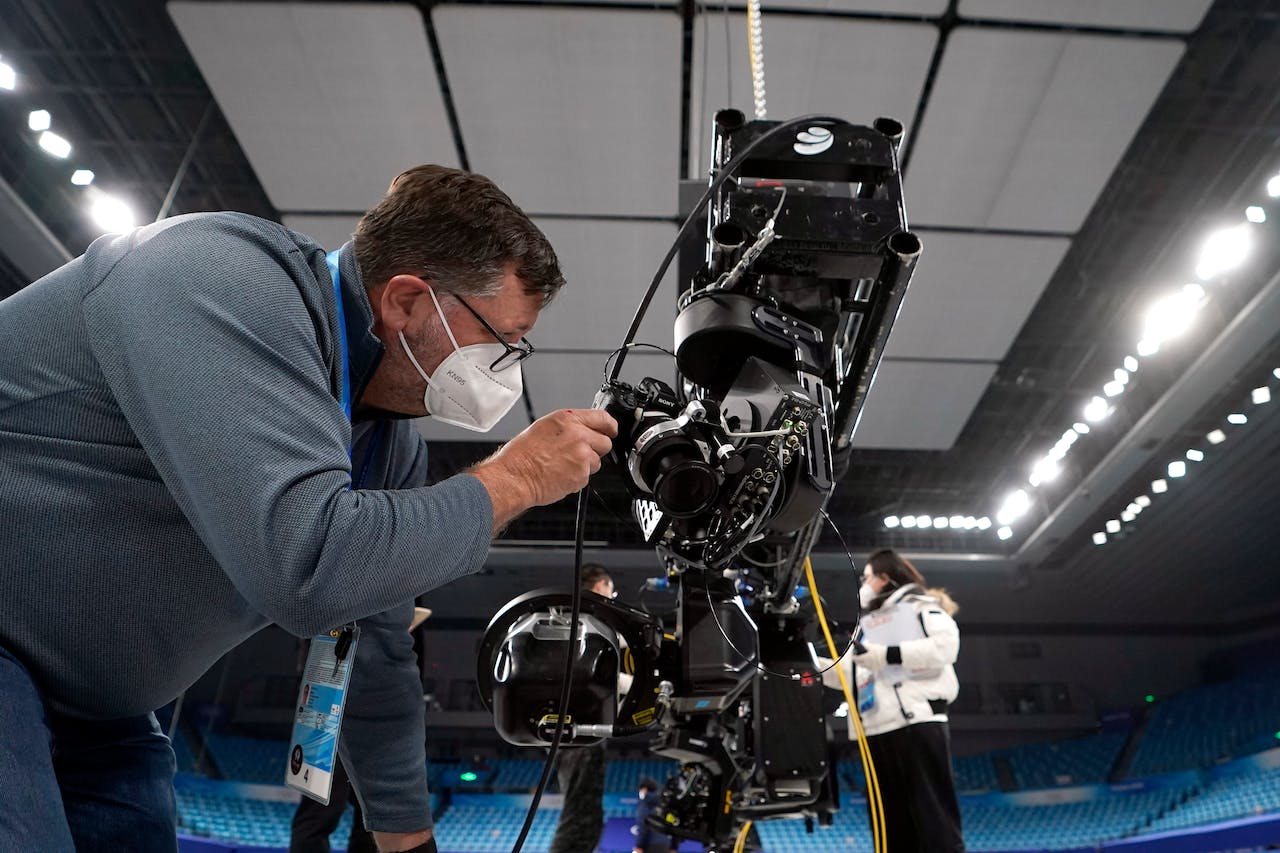 The method is scarcely a decade old — no one was using robotics, at least at the Olympics, before the 2012 Summer Games. There were to be no catwalks at the London venues, so heavy rigs wired with clunky microphone cable were deployed. After that experience, the first change on the list: figuring out how to do the whole operation over a network connection.

The main man behind the AP's mechanics is photographer David J. Phillip. The rigs spend the off-season in Houston, where Phillip is based.

Just before London, Phillip was tasked with devising an underwater camera system — an assignment that mushroomed. He’s a scuba diver and generally interested in tinkering around, having taught himself programming from scratch.

A system born of necessity just keeps getting better, Phillip says, adding that keeping up with the software changes is a “moving target.” The robotics are periodically trotted out for other special events: this week's Super Bowl, the World Series, even presidential debates.

Planning for each Olympics typically begins a couple years before, but the usual site visit 18 months in advance had to be substituted with pandemic-induced Zoom conference calls and studying schematics. Everything — we're talking 10 cargo containers here — has to ship two to three months before the Games begin. It took so long getting the rigs back from Tokyo, that by the time they arrived home to Houston in the fall, it was nearly time for them to make the journey back to Asia. 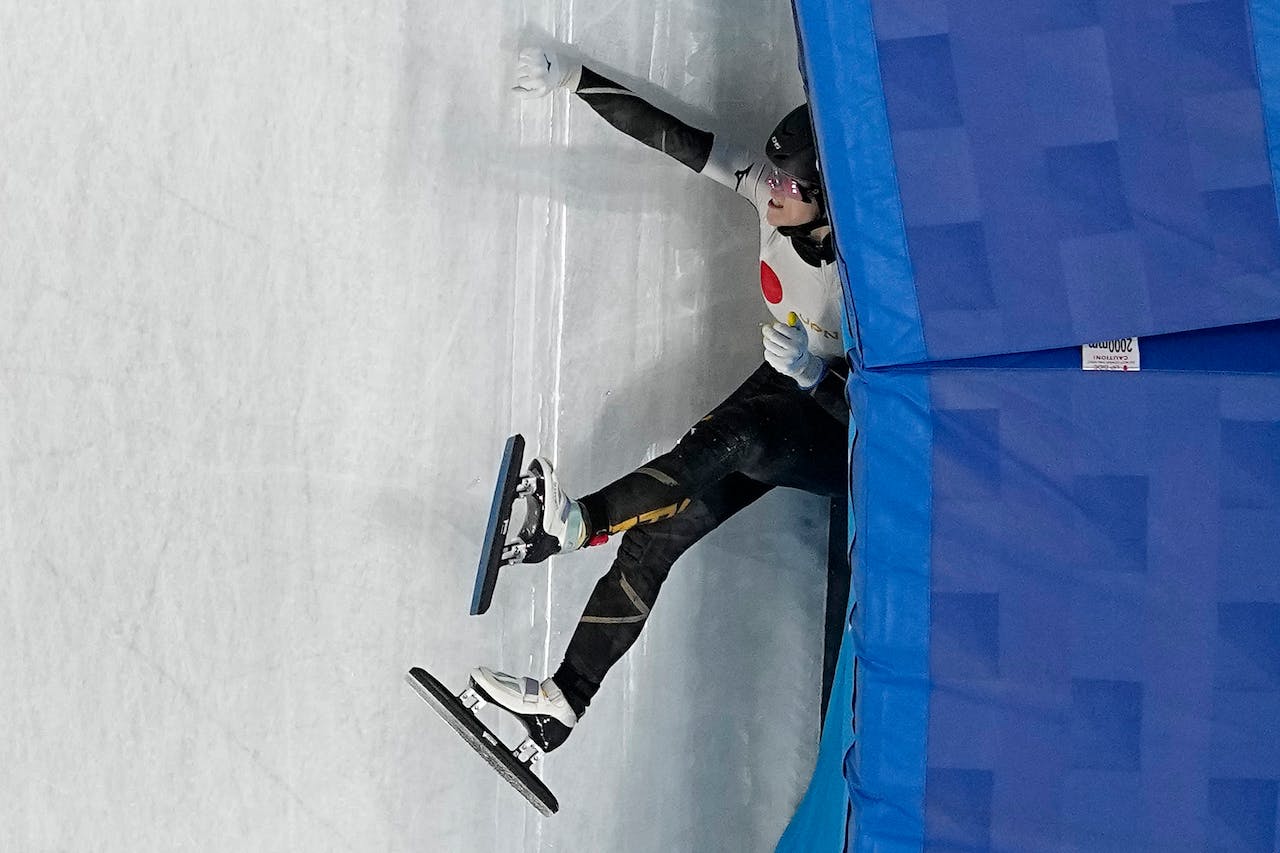 Sumire Kikuchi, of Japan, crashes in the quarterfinals of women's 1,000-meter during the short track speedskating competition at the 2022 Winter Olympics, Friday, Feb. 11, 2022, in Beijing.AP Photo/Jeff Roberson

Only a handful of AP photographers are trained on how to use the tech. Photographers Chris Carlson and Jeff Roberson — based in Charlotte, North Carolina, and St. Louis, respectively — join Phillip in Houston a week before the equipment is to ship. They help him build the rigs, program them ... and then take them apart, so they can be shipped.

On the other end, only Phillip is there to attend their homecoming, slowly unpacking the containers over the course of a week — a contrast that reflects the protracted preparation and sudden denouement that defines the Olympics for athletes, organizers and media.

While the major camera suppliers have consultants in Beijing's closed-loop “bubble,” there are no hardware stores along the closed loop. Accordingly, a duplicate of any component that could break got a ticket to the Olympics. The lumbering ones from London even made the trip, just in case. The A-team was intact and all those extra parts were still riding the bench, though, more more than halfway through the Olympics.

Although AP's Telemetrics rigs are nimbler than most — each weighs about 26 pounds (12 kilograms), standard Sony A1 mirrorless camera included — installation and disassembly the rigs is a matter of pure manual labor. The photographers even need to get certified in heights every two years to do it.

There are four trusses at the Capital Indoor Stadium, home to figure skating and short track speedskating. They're pre-programmed for certain spots — including above the “Kiss & Cry” station — but are maneuverable, offering glimpses into holding areas otherwise walled off from eye level. At the Bird's Nest, four static, remote-operated cameras captured the opening ceremony and remain in place for the closing. 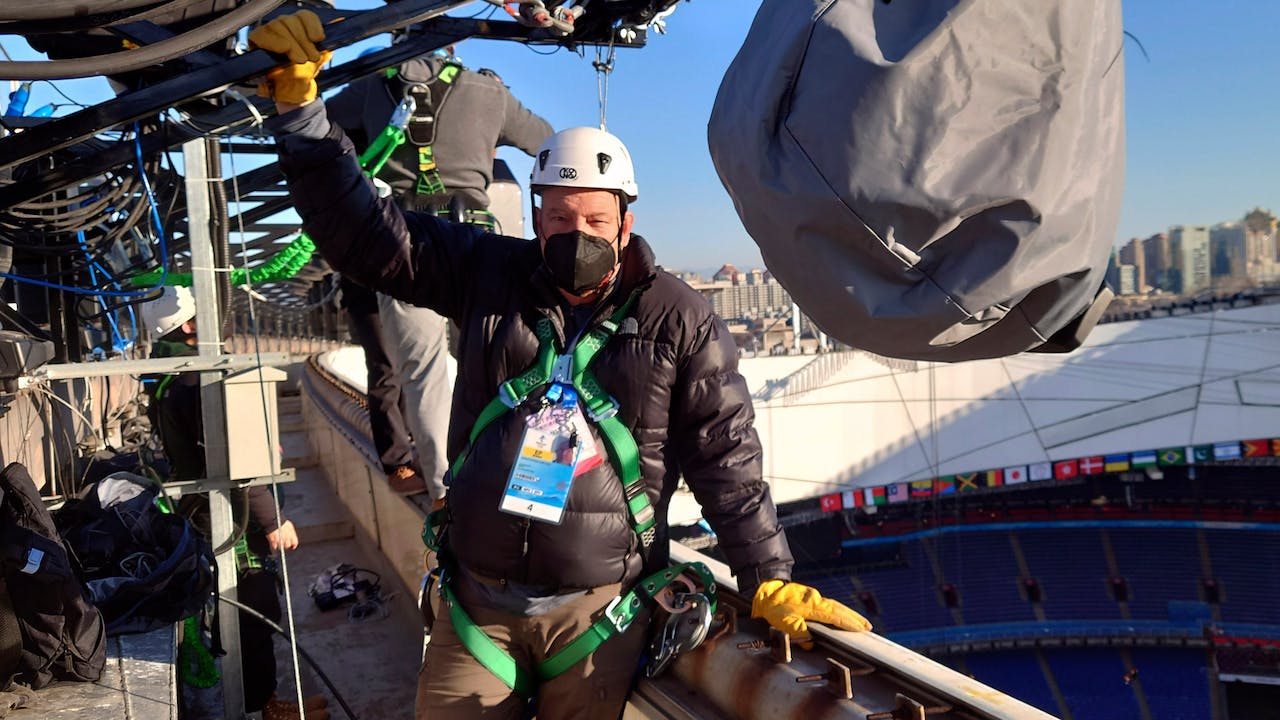 Associated Press photographer Chris Carlson poses for a photo while installing a remote camera on the roof of the National Stadium, known as the Bird's Nest, in Beijing on Jan. 28, 2022.AP Photo/David J. Phillip

While a photographer is usually dedicated to piloting the operation over at the Capital Indoor Stadium, the hockey photographers are shooting and firing the remote-operated cameras at the same time. Because those cameras are over the goals, it's fairly obvious when to fire.

The AP brought fewer remote setups to Beijing than in summer, so the photography staff had to choose the sports where the tech would “pay the most dividends,” Phillip says. There's at least $100,000 worth of equipment among the rigs. Whatever the cost, he says, “the reward — what we’ve able to do with them — has been worth it 10 times over."

The ability to control the cameras from multiple venues was piloted in in 2016 in Rio. That means that photographers technically don’t have to be on site to make the photos. Roberson shot a pairs skating session from the AP office in the Main Media Center so he could make it to the opening ceremony. But being in the venue is definitely preferred, affording a broader perspective.

At the Capital Indoor Stadium, Roberson is nearly totally screened in — literally. At his station atop the press tribune, there’s a control panel on one monitor with the robotics software. A joystick enables zoom, and photos can be made by clicking a small keypad. A second monitor with Sony software displays the view from each camera and allows him to adjust camera settings like shutter speed and aperture.

He's watching the multi-view display, ice action and editing photos on his laptop all at the same time — a process that vacillates between being balletic and frenetic.

“It’s like playing a video game, and I’m not good at video games,” Roberson quipped. “This is the hardest thing I’ve ever done.” (The simile is not totally figurative: at one point, another robotics maker wanted $5,000 for a controller, so Phillip figured out how to map it onto an old PlayStation 2 joystick instead.) 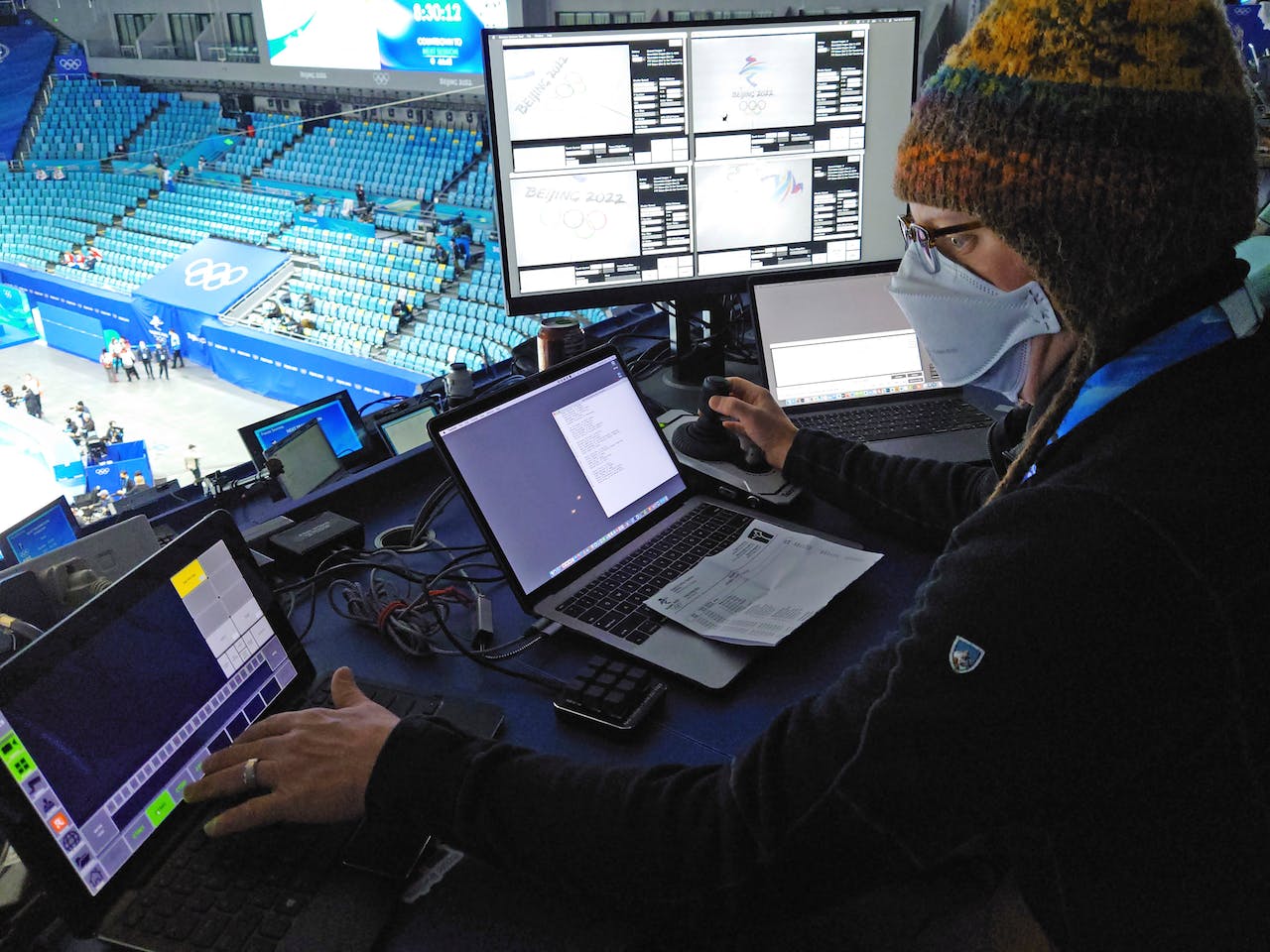 Roberson estimates that four-fifths of the robotics-assisted images are unusable. Sometimes, because athletes are so fast, he has to resort to smashing all the keypad buttons at once, producing many photos of nothing but the dingy, scarred Olympic ice.

Despite the stress, Roberson says he loves it all the same: “When I just started doing this, it was like learning photography again.”

Phillip says there's one major thing on his wish list as the technology continues to evolve. There's already spin, tilt and zoom, but he'd like the ability to roll to add a fourth axis.

Despite that, there's only one major impediment in the robotics' way: the Spidercam, a video camera suspending by wires that sags down, following the dancers' every move like an eager puppy. Sighs Phillip: “It's always a battle with the Spidercam.” 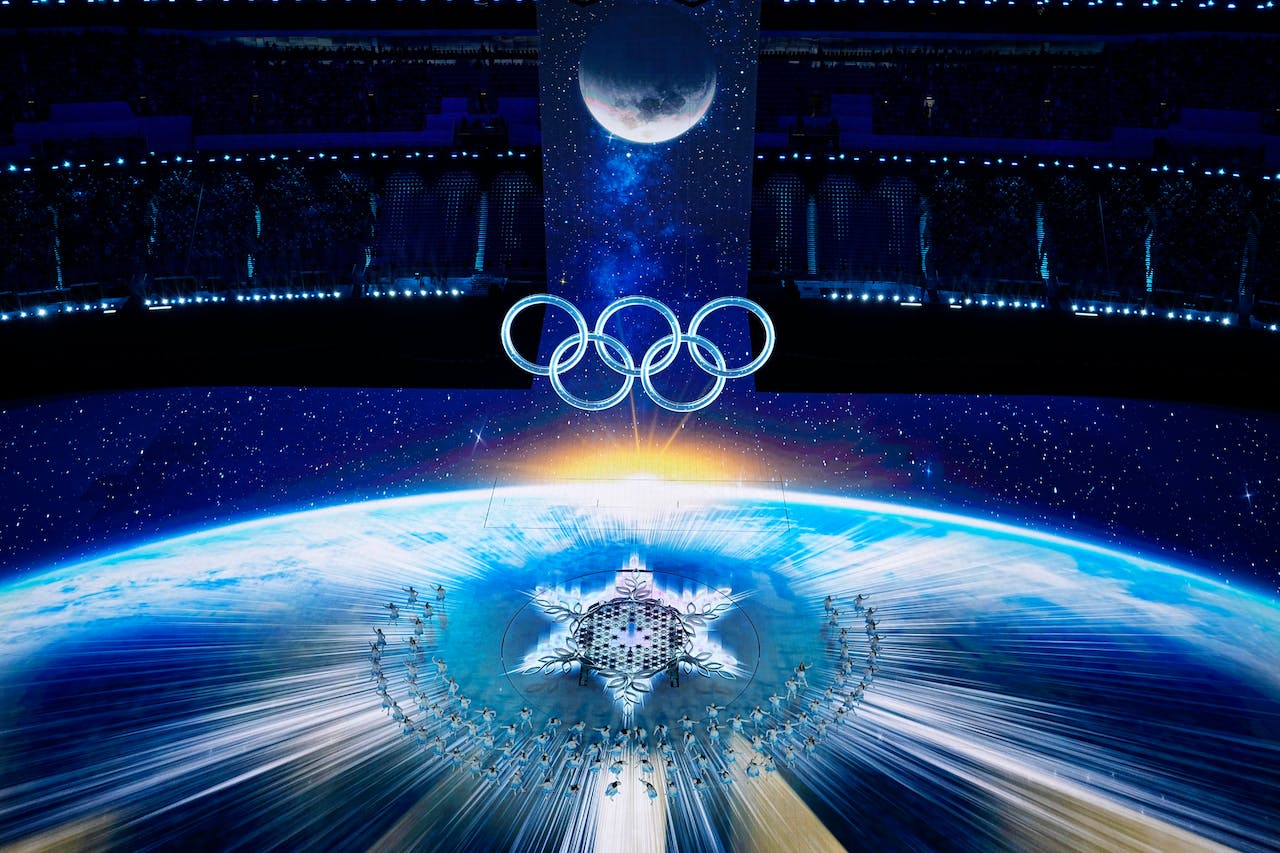 Dancers perform during the opening ceremony of the 2022 Winter Olympics, Friday, Feb. 4, 2022, in Beijing.AP Photo/Jeff Roberson