The 1,000 tanks of water need to be removed for the plant’s decades-long decommissioning. 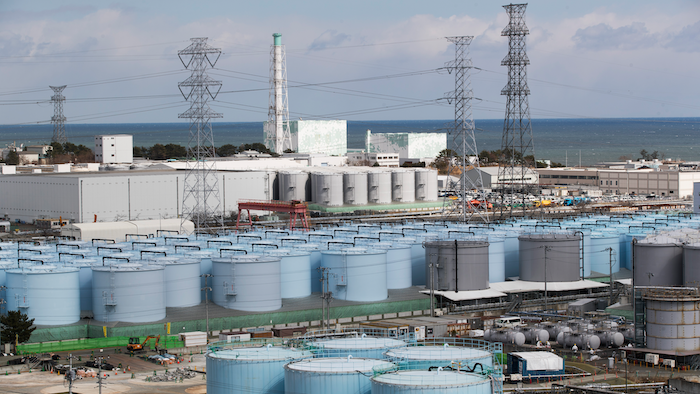 The industry and foreign ministries announced Monday, Feb. 7, 2022, that a team of experts from the International Atomic Energy Agency will visit Japan's wrecked Fukushima nuclear power plant next week to review plans to begin releasing millions of gallons of treated radioactive water into the sea, a mission the government hopes will assure people of its safety.
AP Photo/Hiro Komae, file

TOKYO (AP) — A team of experts from the International Atomic Energy Agency will visit Japan's wrecked Fukushima nuclear power plant next week to review plans to begin releasing more than a million tons of treated radioactive water into the sea, a mission the government hopes will assure people of the plans' safety.

The team of about 15 experts will meet with government and utility officials during their Feb. 14-18 mission, which includes a visit to the Fukushima Daiichi plant, industry ministry officials said Monday.

The government and Tokyo Electric Power Company Holdings announced plans last year to begin gradually releasing the still-contaminated water in spring 2023 after further treatment and dilution. The water is being stored in about 1,000 tanks at the plant which need to be removed to allow for the wrecked plant’s decades-long decommissioning. The tanks are expected to reach their capacity of 1.37 million tons later this year.

The plan has been fiercely opposed by fishermen, local residents and Japan’s neighbors, including China and South Korea.

Japan has sought IAEA's assistance to ensure the release meets international safety standards and gain the understanding of other countries. The team is expected to include several IAEA officials and an expert from each of 11 countries including South Korea and China, officials said.

A massive earthquake and tsunami in 2011 destroyed the Fukushima plant’s cooling systems, triggering the meltdown of three reactors and the release of large amounts of radiation, and causing more than 160,000 people to evacuate. Water used to cool the highly radioactive reactor cores has since leaked extensively, mixing with groundwater seeping into reactor buildings.

Japanese officials say the only realistic option is to slowly release the contaminated water, diluted with sea water, into the ocean. The discharge is expected to take decades to finish.

Officials say all isotopes selected for treatment can be reduced to low levels except for tritium, which is inseparable from the water but is harmless in small amounts.

The IAEA mission was originally scheduled for December but was delayed due to the global surge of the omicron coronavirus variant. Japan’s industry ministry and the IAEA have agreed to compile an interim report on the water discharge plan in 2022.

Officials say it is now safe to live in most areas around the plant except for its immediate surroundings after extensive decontamination work. They blame “reputational damage,” or incorrect information about the impact of radiation, for delaying the recovery of Fukushima’s agricultural and fisheries industries.

Six people recently filed a lawsuit seeking compensation from TEPCO for thyroid cancers that they believe were caused by radiation from the accident. About 300 people who were children at the time have since developed the illness.

On Jan. 27, five former Japanese prime ministers issued a joint statement urging the European Commission to reverse its decision to include nuclear power as an “environmentally sustainable economic activity” under EU taxonomy, noting the Fukushima tragedy and thyroid cancer in many children there.

Government officials have repeatedly denied links between thyroid cancer in Fukushima and the accident and accused the former leaders of spreading “false information and wrongful discrimination and prejudice.”