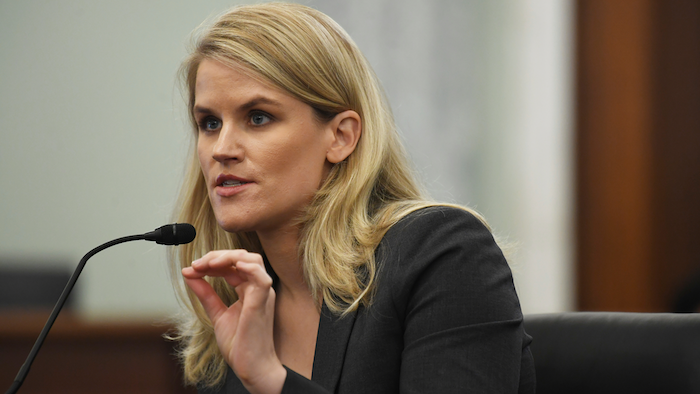 Former Facebook employee and whistleblower Frances Haugen testifies during a Senate Committee on Commerce, Science, and Transportation hearing on Capitol Hill on Tuesday, Oct. 5, 2021, in Washington. Haugen made a significant mark on the embattled tech industry in 2021.
Matt McClain/The Washington Post via AP, Pool, File

WASHINGTON (AP) — Three bright and driven women with ground-breaking ideas made significant — if very different — marks on the embattled tech industry in 2021.

Haugen, a former product manager at Facebook, went public with internal documents to buttress accusations that the social network giant elevated profits over the safety of users. At 32, Khan is the youngest person ever to lead the Federal Trade Commission, an agency now poised to aggressively enforce antitrust law against the tech industry.

Holmes, once worth $4.5 billion on paper, is now awaiting a jury's verdict on fraud charges that she misled investors and patients about the accuracy of a blood-testing technology developed at her startup Theranos. Her story has become a Silicon Valley morality tale — a founder who flew too high, too fast — despite the fact that male tech executives have been accused of similar actions or worse without facing charges.

Haugen joined Facebook out of a desire to help it address misinformation and other threats to democracy. But her frustration grew as she learned of online misinformation that stoked violence and abuse — and which Facebook wasn't addressing effectively.

So in the fall of 2021 the 37-year-old Haugen went public with a trove of Facebook documents that catalogued how her former employer was failing to protect young users from body-image issues and amplifying online hate and extremism. Her work also laid bare the algorithms Big Tech uses to tailor content that will keep users hooked on its services.

“Frances Haugen has transformed the conversation about technology reform,” Roger McNamee, an early investor in Facebook who became one of its leading critics, wrote in Time magazine.

Facebook the company, which has since renamed itself Meta Platforms, has disputed Haugen’s assertions, although it hasn’t pointed to any factual errors in her public statements. The company instead emphasizes the vast sums it says it has invested in safety since 2016 and data showing the progress it's made against hate speech, incitement to political violence and other social ills.

Haugen was well positioned to unleash her bombshell. As a graduate business student at Harvard, she helped create an online dating platform that eventually turned into the dating app Hinge. At Google, she helped make thousands of books accessible on mobile phones and to create a fledgling social network. Haugen’s creative restlessness flipped her through several jobs over 15 years at Google, Yelp and Pinterest and of course Facebook, which recruited her in 2018.

Haugen’s revelations energized global lawmakers seeking to rein in Big Tech, although there's been little concrete action in the U.S. Facebook rushed to change the subject by rolling out its new corporate name and playing up its commitment to developing an immersive technology platform known as the “metaverse.”

Haugen moved this year to Puerto Rico, where she says she can enjoy anonymity that would elude her in northern California. “I don’t like being the center of attention,” she told a packed arena at a November conference in Europe. 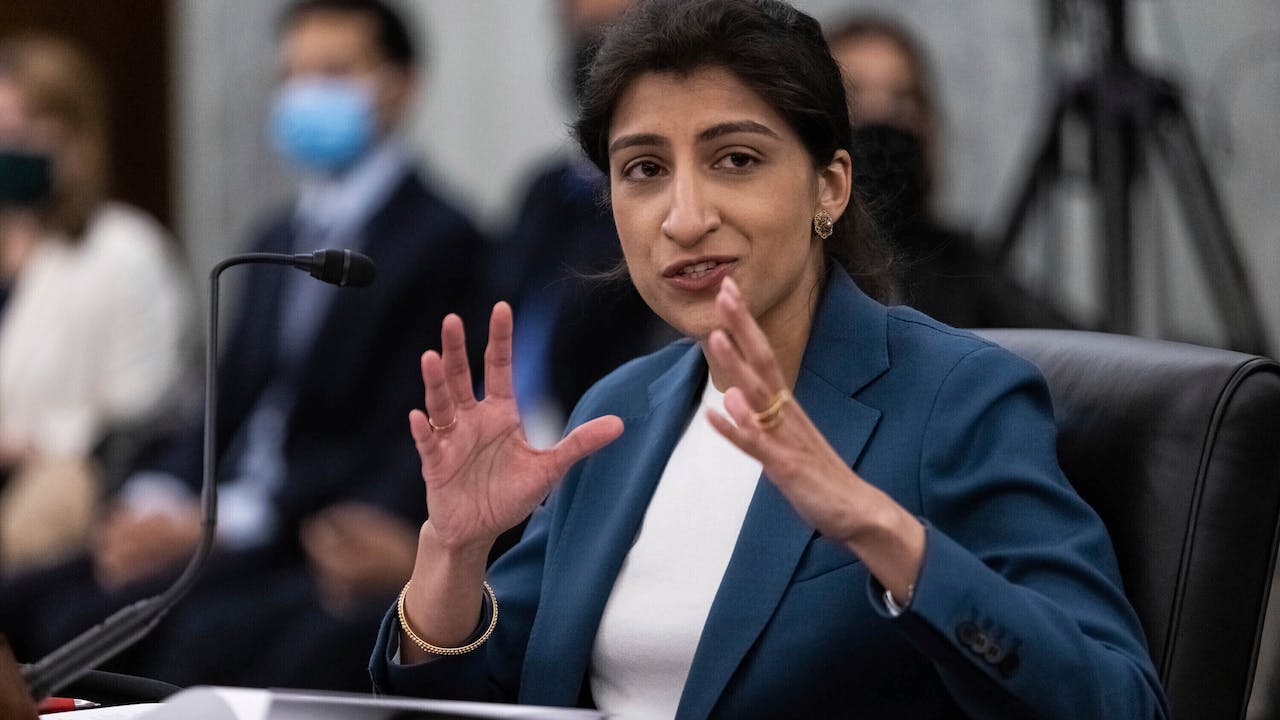 Lina Khan, nominee for Commissioner of the Federal Trade Commission (FTC), speaks during a Senate Committee on Commerce, Science, and Transportation confirmation hearing, Wednesday, April 21, 2021, on Capitol Hill in Washington. Khan is now the youngest person ever to lead the Federal Trade Commission, an agency now poised to aggressively enforce antitrust law against the tech industry.Graeme Jennings/Washington Examiner via AP, Pool, File

A similar dynamic prevailed for Khan, an academic outsider with big new ideas and a far-reaching agenda that ruffled institutional and business feathers. President Joe Biden stunned official Washington in June when he installed Khan, an energetic critic of Big Tech then teaching law, as head of the Federal Trade Commission. That signaled a tough government stance toward giants Meta, Google, Amazon and Apple.

Khan is the youngest chair in the 106-year history of the FTC, which polices competition, consumer protection and digital privacy. She was an unorthodox choice, with no administrative experience or knowledge of the agency other than a brief 2018 stint as legal adviser to one of the five commissioners.

But she brought intellectual heft that packed a political punch. Khan shook up the antitrust world in 2017 with her scholarly work as a Yale law student, “Amazon’s Antitrust Paradox,” which helped shape a new way of looking at antitrust law.

For decades, antitrust work has defined anticompetitive action as market dominance that drives up prices, a concept that doesn't apply to many “free” technology services. Khan instead pushed to examine the broader effects of corporate concentration on industries, employees and communities. That school of thought — dubbed “hipster antitrust” by its detractors — appears to have had a significant influence on Biden.

Khan was born in London; her family moved to the New York City area when she was 11. After graduating from college, she spent three years as a policy analyst at the liberal-leaning think tank New America Foundation before leaving for Yale.

Under Khan’s six-month tenure, the FTC has sharpened its antitrust attack against Facebook in federal court and pursued a competition investigation into Amazon. The agency sued to block graphics chip maker Nvidia’s $40 billion purchase of chip designer Arm, saying a combined company could stifle the growth of new technologies.

In Khan's aggressive investigations and enforcement agenda, key priorities include racial bias in algorithms and market-power abuses by dominant tech companies. Internally, some employees have chafed at administrative changes that expanded Khan’s authority over policymaking, and one Republican commissioner has assailed Khan in public.

“She’s shaken things up,” said Robin Gaster, a visiting scholar at George Washington University who focuses on economics, politics and technology. “She is going to be a field test for whether an aggressive FTC can expand the envelope for antitrust enforcement.”

The U.S. Chamber of Commerce, the leading business lobby, has publicly threatened court fights, asserting that Khan and the FTC are waging war on American businesses. 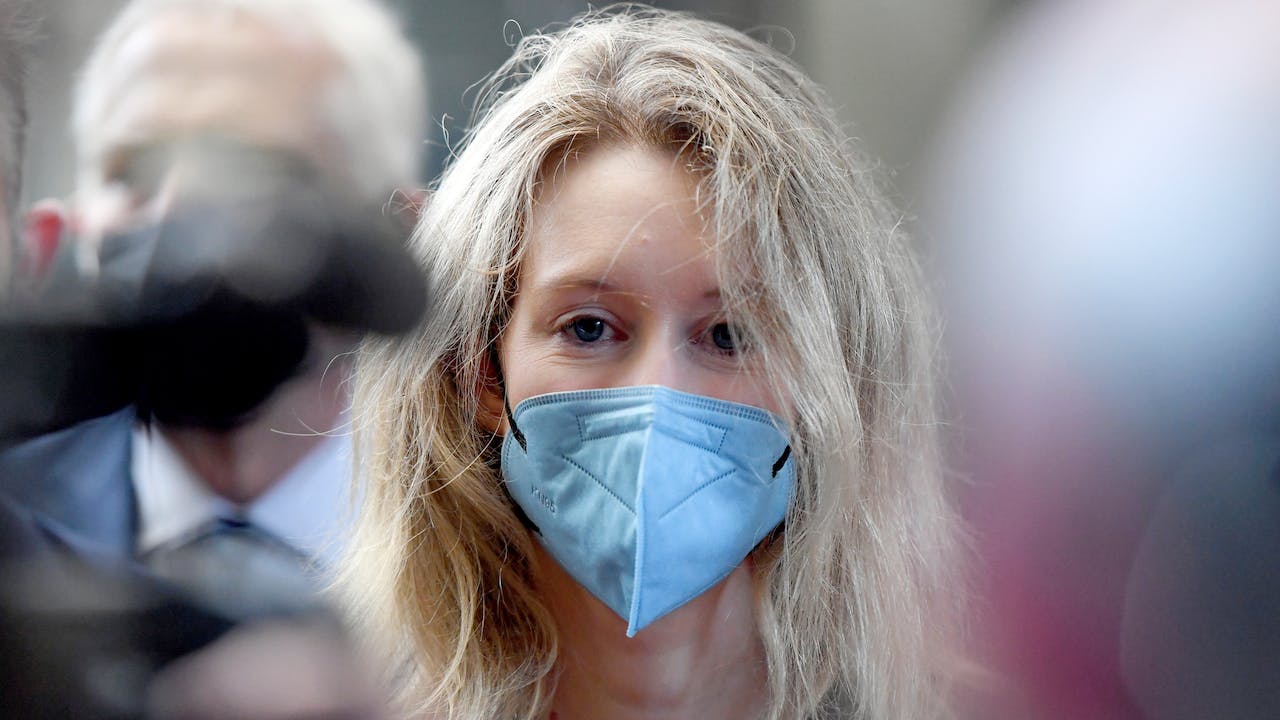 Elizabeth Holmes, founder and CEO of Theranos, arrives at the federal courthouse for jury selection in her trial, Tuesday, Aug. 31, 2021, in San Jose, Calif. Coming into 2022, Holmes, once worth $4.5 billion on paper, is now awaiting a jury's verdict on fraud charges that she misled investors and patients about the accuracy of a blood-testing technology developed at her startup Theranos.AP Photo/Nic Coury, File

Holmes founded Theranos when she was 19, dropping out of Stanford to pursue a bold, humanitarian idea. Possessed of seemingly boundless networking chutzpah, Holmes touted Theranos blood-testing technology as a breakthrough that could scan for hundreds of medical conditions using just a few drops of blood.

By 2015, 11 years after leaving Stanford, Holmes had raised hundreds of millions of dollars for her company, pushing its market value to $9 billion. Half of that belonged to Holmes, earning her the moniker of the world’s youngest self-made female billionaire at 30.

Just three years later, though, Theranos collapsed in scandal. After a three-and-a-half-month federal trial, a jury now is weighing criminal fraud and conspiracy charges against Holmes for allegedly duping investors and patients by concealing the fact that the blood-testing technology was prone to wild errors. If convicted, Holmes, now 37, faces up to 20 years in prison.

When young, Holmes was a competitive prodigy who openly aspired to make a vast fortune. She started studying Mandarin Chinese with a tutor around age 9, and talked her way into summer classes in the language at Stanford after her sophomore year in high school.

In her sophomore college year, she took the remainder of her tuition money as a stake and dropped out to run her company.

As Theranos ascended, some saw Holmes as the next Steve Jobs. Theranos ultimately raised more than $900 million from investors including media baron Rupert Murdoch and Walmart’s Walton family.

The company’s fairy-tale success started to unravel in 2016, when a series of Wall Street Journal articles and a federal regulatory audit uncovered a pattern of grossly inaccurate blood results in tests run on Theranos devices.

The Holmes trial has exposed Silicon Valley’s “fake it ‘til you make it” culture in painful detail. Tech entrepreneurs often overpromise and exaggerate, so prosecutors faced the challenge of proving that Holmes’ boosterism crossed the line into fraud.