The projects would generate up to 465 megawatts of electricity. 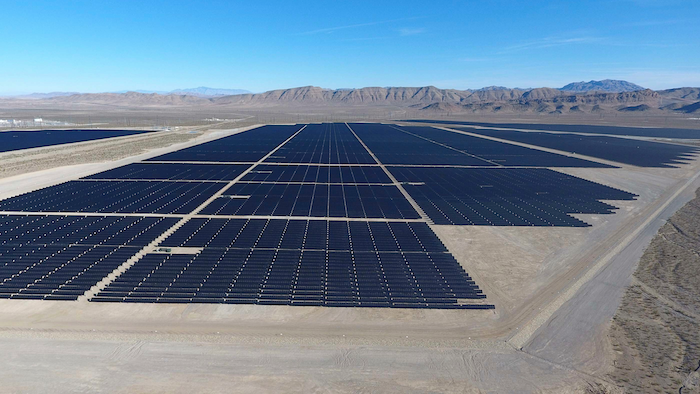 The Interior Department approved the Arica and Victory Pass solar projects on federal land in Riverside County east of Los Angeles. Combined they would generate up to 465 megawatts of electricity, or enough to power about 132,000 homes, according to San Francisco-based developer Clearway Energy. Approval of a third solar farm planned for 500 megawatts is expected in coming days, officials said.

The invitation to developers comes as officials under Democratic President Joe Biden promote renewable wind and solar power on public lands and offshore to reduce greenhouse gas emissions that are warming the planet. That's a pronounced change from Republican President Donald Trump's emphasis on coal mining and oil and gas drilling.

Biden suffered a huge blow to his climate agenda this week, as opposition from West Virginia Democrat Sen. Joe Manchin tanked the administration's centerpiece climate and social services legislation. The administration also has been forced to resume oil and natural gas lease sales in the Gulf of Mexico and numerous western states, after a federal judge sided with Republican-led states that sued when Biden suspended the sales.

During a Tuesday conference call with reporters, Interior Secretary Deb Haaland did not directly address a question about the faltering climate bill and instead pointed to clean energy provisions in the bipartisan infrastructure bill signed into law last month.

“We fully intend to meet our clean energy goals,” Haaland said. She said the Trump administration stalled clean energy by shuttering renewable energy offices at the Bureau of Land Management and undermining long-term agreements, such as a conservation plan tied to solar development in the California desert.

"We are rebuilding that capacity," Haaland said.

But without the climate bill, tax incentives to build large-scale solar will drop to 10% of a developer’s total capital costs by 2024, instead of rising to 30%, said Xiaojing Sun, head solar researcher at industry consulting firm Wood Mackenzie.

Incentives for residential-scale solar would go away completely by 2024, she said.

“It will significantly slow down the growth of solar,” Sun said.

However, she added that streamlining access to federal land could help the industry, as large solar farms on non-federal lands face growing local opposition and cumbersome zoning laws.

Forty large-scale solar proposals in the West are under consideration, she said.

The agency in early December issued a draft plan to reduce rents and other fees paid by companies authorized to build wind and solar projects on public lands. Officials were unable to provide an estimate of how much money that could save developers.

In Nevada, where the federal government owns and manages more than 80% of the state's land, large-scale solar projects have faced opposition from environmentalists concerned about harm to plants and animals in the sun- and windswept deserts.

Developers abandoned plans for what would have been the country’s largest solar panel installation earlier this year north of Las Vegas amid concerns from local residents. Environmentalists are fighting another solar project near the Nevada-California border that they claim could harm birds and desert tortoises.

Stone-Manning said solar projects on public lands are being sited to take environmental concerns into account.

If all that land were developed, the bureau says it could support more than 100 gigawatts of solar power, or enough for 29 million homes.

The power generation capacity of solar farms operating on federal lands is a small fraction of that amount — just over 3 gigawatts, federal data shows.

In November the land bureau awarded solar leases for land in Utah's Milford Flats solar zone. Solar leases are expected to be finalized by the end of the month for about land at several sites in Arizona.

Solar power on public and private lands accounted for about 3% of total U.S. electricity production in 2020. After construction costs fell during the past decade, that figure is expected to grow sharply, to more than 20% by 2050, the U.S. Energy Information Administration projects.

Developers warn costs have been rising due to constraints on supplies of steel, semiconductor chips and other materials.