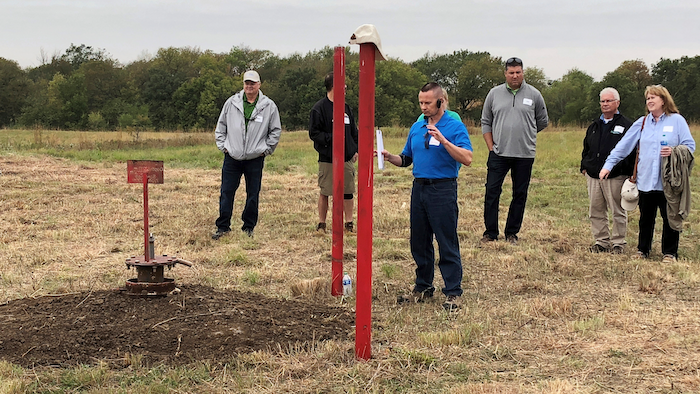 NioCorp Chief Operating Officer Scott Honan tells a group of investors during a tour of the site on Oct. 6, 2021, about the plans for a proposed mine near Elk Creek in southeast Nebraska. The company hopes to build the mine to extract several critical minerals, if it can raise $1 billion.
AP Photo/Josh Funk

OMAHA, Neb. (AP) — The company working to build a mine in southeast Nebraska to extract a rare element used to make steel lighter and stronger said Tuesday that it may also be able to produce some of the key ingredients needed to make the powerful magnets used in electric vehicles and other high-tech products.

NioCorp Developments released a new report Tuesday that shows those rare earth elements are present throughout the deposit it plans to mine if it can raise roughly $1 billion to build the project about 80 miles (128.75 kilometers) south of Omaha near the town of Elk Creek.

Being able to produce those sought-after elements along with the niobium, scandium and titanium NioCorp plans to mine would make the project more attractive to investors, but the company won't know for sure whether it can economically produce those rare earth elements until it does some additional analysis of the latest data. It will take several months to complete that review.

“If our rare earth content is found to be high enough to economically justify extraction of individual rare earths as a byproduct of our planned niobium, scandium, and titanium production, the Elk Creek project could ultimately emerge as a U.S. producer of the magnetic rare earths,” NioCorp CEO Mark Smith said.

Analyst David Abraham, who wrote a book about rare earth production, said NioCorp will benefit if it can expand what it will produce, but investors shouldn't be surprised that the company is now also trying to produce rare earths. After all, the company used to be named Quantum Rare Earth Developments.

The key will be determining whether it is cost effective to produce the rare earths.

“There’s a lot of minerals in the ore body," said Abraham, who runs the Technology, Rare and Electronics Materials Center. "The question is what is actually economically feasible to recover and realistic to process.”

The potential shift back to producing rare earths shows how these mining projects evolve over time in response to the market, said professor Rod Eggert, deputy director of the Critical Materials Institute at the Colorado School of Mines. Now that interest in rare earths is increasing once more, NioCorp is again looking at producing them, but it won't be simple to do so.

“While recovering multiple materials from a single deposit increases revenues from the deposit, it also makes the processing of the ore more complicated,” Eggert said.

Currently, very little of what NioCorp wants to mine is produced in the United States. About 90% of the niobium used here comes from Brazil and the other elements are largely produced in China.

The U.S. imports all the niobium and scandium and most of the titanium and rare earths that manufacturers rely on now. There is only one American mine that produces rare earths now at a site in California.

“Without getting too far ahead of ourselves I think there is some real economic potential here and boy, it sure would be nice to make some of this stuff in the United States along with the niobium, scandium and titanium,” NioCorp's Chief Operations Officer Scott Honan said.

Niobium is mixed with steel to make the metal stronger and more heat resistant. It also may be used to help make lithium ion batteries recharge more quickly. Scandium could be used to make stronger aluminum alloys. And the titanium NioCorp plans to produce is used as a pigment in paint.

The other elements it hopes to produce, which include neodymium and dysprosium, are used to make the strong, lightweight rare earth magnets that are used to in the motors of electric vehicles, wind turbines, power tools and home appliances.

The proposed mine is expected to create over 400 jobs if it is built. NioCorp is working to raise enough money to build the mine. The project previously qualified for up to $200 million in state tax incentives.

NioCorp is based in Centennial, Colorado.