The sensors could one day be used for multiple tasks, including detecting narcotics manufacturing. 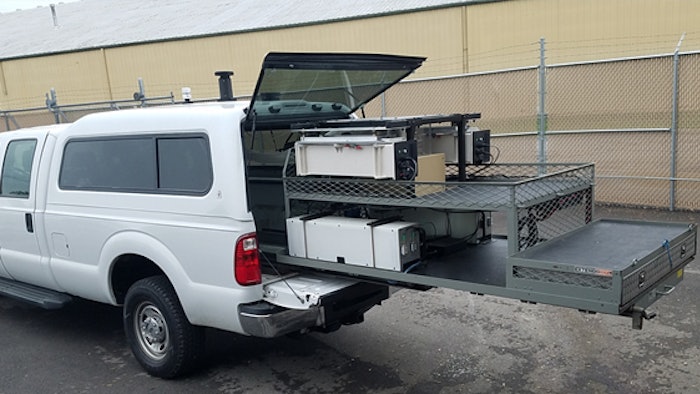 SIGMA+ sensors detecting the entire spectrum of weapons of mass destruction (WMD) threats slide into the back of a police vehicle with additional space on the racks for regular police cargo.
DARPA

During the pilot study, two week-long exercises took place that supplemented the August 2020 event. The environmental data collected during the exercise are being used to map the naturally occurring chemical and biological backgrounds found in the Indianapolis urban area that result from businesses, industries, and environmental patterns.

The data, in turn, are supporting the development of both sensors and algorithms that minimize false positives and maximize detections of anomalies that may be associated with threat activities. During the Indianapolis pilot study, nuisance alarms were able to be suppressed by 75%.

In addition to characterizing the urban chemical background, the research team generated controlled releases of benign chemicals such as ethanol to challenge the mobile sensors. These releases were intended to simulate production of threat materials such as home-made explosives, narcotics, or other chemical hazards. SIGMA+ has developed a unique chemical referee system that integrates a laboratory-grade instrument into a mobile platform to provide real-time, ground-truth interpretation of the local chemical background.

“The Indianapolis pilot study and field testing marked the first time we were able to demonstrate the integration of cutting-edge SIGMA+ sensor technology across the entire CBRNE threat space into a law-enforcement (LE) vehicle,” said Mark Wrobel, SIGMA+ program manager in DARPA’s Defense Sciences Office. “This included air sampling, power, and the user interface that provides the vehicle operator real-time analysis of potential threats via a tablet. The ultimate goal is to outfit a citywide fleet of LE or other public service vehicles to enable a continuously refreshed mobile network that can detect WMD threats with low false-alarm rates across a city or region.”

“Having the ability to use this technology, at the local level, is a giant leap forward in making sure our communities are safer from all of the potential CBRNE threat vectors,” said Sgt. Robert Brown, counter-weapons of mass destruction (WMD/CBRNE) program manager in the Homeland Security Bureau of the Indianapolis Metropolitan Police Department. “We hope to be able to successfully predict, detect, locate, and interdict these threats before a WMD attack can be carried out.”

Next steps for the SIGMA+ program include testing in other metropolitan regions and developing operational procedures to integrate sensors into real-world use. SIGMA+ algorithm and sensor developers will continue to refine software and hardware to further drive down nuisance alarms caused by the complex chemical, biological, and radiological background signatures of urban environments.