Lithium is a critical component of rechargeable batteries. 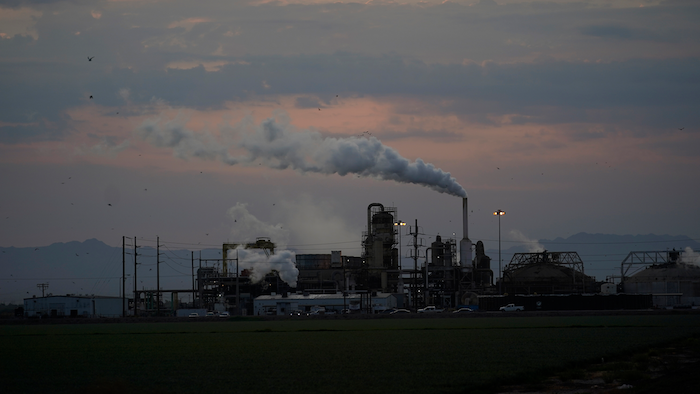 CALIPATRIA, Calif. (AP) — Near Southern California’s dying Salton Sea, a canopy next to a geothermal power plant covers large vats of salty water left behind after super-hot liquid is drilled from deep underground to run steam turbines. The vats connect to tubes that spit out what looks like dishwater, but it’s lithium, a critical component of rechargeable batteries and the newest hope for economic revival in the depressed region.

Demand for electric vehicles has shifted investments into high gear to extract lithium from brine, salty water that has been overlooked and pumped back underground since the region’s first geothermal plant opened in 1982. The mineral-rich byproduct may now be more valued than the steam used to generate electricity.

California’s largest but rapidly shrinking lake is at the forefront of efforts to make the U.S. a major global player in production of the ultralight metal. Despite large deposits in the U.S., Nevada has the country’s only lithium plant, and American production lags far behind Australia, Chile, Argentina and China.

Decades of environmental ruin and failed economic promise have left some residents on the Salton Sea’s receding shores indifferent or wary.

The Salton Sea formed in 1905 after the Colorado River breached a dike and two years of flooding filled a sizzling basin. In the 1950s, the lake thrived as a tourist destination, drawing anglers, boaters and celebrity visitors including Frank Sinatra.

But storms in the 1970s destroyed marinas and resorts. Flooding wrecked many homes in the tiny, former resort town of Bombay Beach, and after the water dried, left an almost apocalyptic atmosphere that has recently attracted artists.

The lake level peaked in 1995 but, with little rain, has since been evaporating faster than Colorado River water seeping downhill through farms can replenish as farmers conserved more water.

The sea is a key stopover for migrating birds, but species are declining as the fish they eat become scarce. Carcasses of oxygen-starved tilapia no longer blanket shores periodically with a stench that could reach Los Angeles because there are so few left.

In Salton City, a town of about 6,000, roads curve along empty lots, a legacy of its first developer who stopped construction in 1960. Street signs with idyllic names like Harbor Drive and Sea Shore Avenue mark a barren landscape of cracked pavement.

Pat Milsop, a 61-year-old retired restaurant owner, hits golf balls across a dry canal. His view is filled with dilapidated docks on bone-dry soil that harbored boats when his mother-in-law bought his house in 2004. He is skeptical that lithium will restore some of the lake’s glory.

“Are they going to do something good for the community or just buy up all the land and kick everybody out?” he asks. Nostalgic for livelier days, he plans to move to his farm near Lubbock, Texas.

The lake is at the southern tip of the San Andreas Fault, which has shifting tectonic plates that bring molten material closer to Earth’s surface.

Controlled Thermal Resources Ltd. is building what would be the region's first new geothermal facility in more than a decade and anticipates the $520 million plant would start producing lithium in 2024. In July, General Motors Corp. said it invested in the project as it seeks to eliminate tailpipe emissions from light-duty vehicles by 2035.

Owners of 11 existing geothermal plants around the lake’s southern shores are retooling for lithium and possibly other brine minerals instead of building from scratch. Warren Buffett’s Berkshire Hathaway Energy Co. has state and federal grants for lithium demonstration projects and says it could begin construction for commercial operations in 2024.

EnergySource LLC opened its geothermal plant in 2012 and its sister company, EnergySource Minerals, has extracted lithium there on a small scale since 2016, said Derek Benson, chief operating officer. It plans to start building a $500 million addition for mineral extraction by the end of March.

Before it is pumped back underground, the brine is “borrowed” for a few hours to extract lithium under a nearby canopy, Benson said.

Extracting lithium from geothermal brine has never been done on a commercial scale. Supporters say it causes less environmental damage than the two dominant production methods: mining for rocks and using cooler brine that bakes under the sun in large ponds for about two years until the water evaporates. The Nevada plant uses evaporation ponds.

The Salton Sea is in Imperial County, which, despite hugely productive land that stocks U.S. supermarkets with winter vegetables, has a poverty rate of 22%, among California’s highest. El Centro, the county seat, perennially has one of the highest unemployment rates among 389 U.S. metropolitan areas.

Ruben Hernandez, 54, has worked for an Imperial Valley landowner since he was 8. He and his wife own a Mexican restaurant in the largely deserted town of Niland near the lake. His wife wants to stay, but “there’s nothing here, no town,” he said.

Lithium project backers who come for breakfast tell him he could eventually be feeding 20 to 30 people and delivering lunches to their plant.

“If they are going to lift this town up, it would be great,” he said.