Why Clean Needles Depend on Horseshoe Crabs' Blue Blood

It's one of the stranger, lesser-known aspects of U.S. health care. 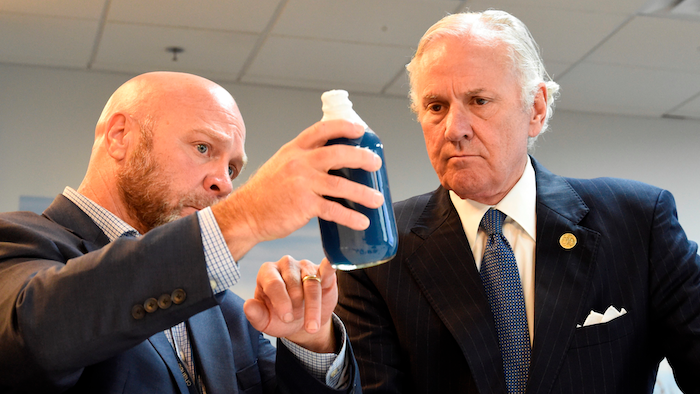 South Carolina Gov. Henry McMaster, right, listens as Foster Jordan of Charles River Labs, left, talks about the properties of horseshoe crab blood, which is a vital component in the contamination testing of injectable medicines - including the coronavirus vaccines - at Charles River Labs on Friday, Aug. 6, 2021, in Charleston, S.C. McMaster says the South Carolina company that bleeds horseshoe crabs for a component crucial to contamination testing of injectable medications is vital to development of a domestic medical supply chain.
AP Photo/Meg Kinnard

CHARLESTON, S.C. (AP) — It's one of the stranger, lesser-known aspects of U.S. health care — the striking, milky-blue blood of horseshoe crabs is a critical component of tests to ensure injectable medications such as coronavirus vaccines aren't contaminated.

To obtain it, harvesters bring many thousands of the creatures to laboratories to be bled each year, and then return them to the sea — a practice that has drawn criticism from conservationists because some don't survive the process.

The blood, which is blue due to its copper content, is coveted for proteins used to create the LAL test, a process used to screen medical products for bacteria. Synthetic alternatives aren't widely accepted by the health care industry and haven't been approved federally, leaving the crabs as the only domestic source of this key ingredient.

Many of these crabs are harvested along the coast of South Carolina, where Gov. Henry McMaster promoted the niche industry as key to the development of a domestic medical supply chain, while also noting that environmental concerns should be explored. 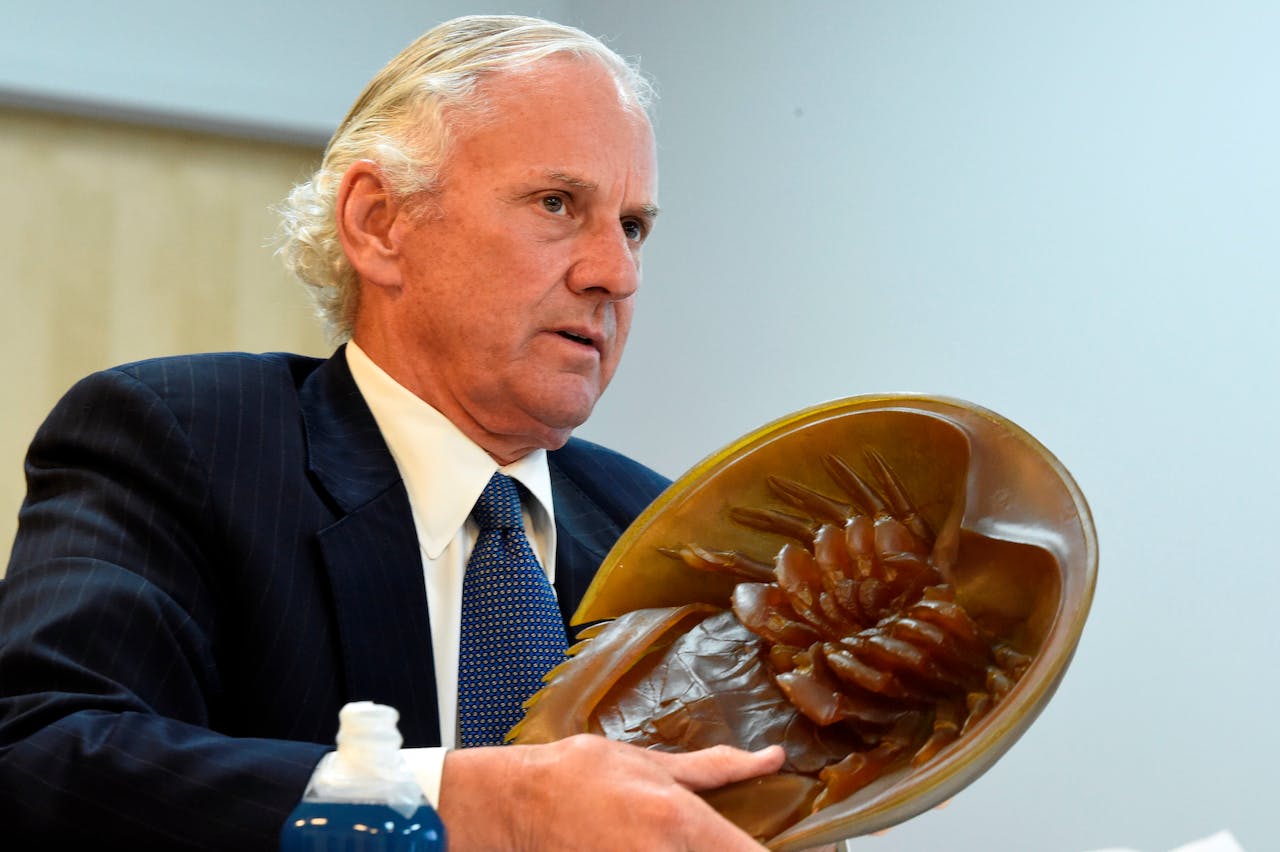 South Carolina Gov. Henry McMaster holds a model of a horseshoe crab, whose blood is a vital component in the contamination testing of injectable medicines - including the coronavirus vaccines - at Charles River Labs on Friday, Aug. 6, 2021, in Charleston, S.C.AP Photo/Meg Kinnard

“We don’t want to have to depend on foreign countries for a lot of reasons, including national security, so it’s good to see this company thriving in the United States," McMaster told The Associated Press this month during a visit to Charles River Laboratories at its Charleston facilities, to which AP was granted rare access. “We want to do everything we can to onshore all of these critical operations.”

Horseshoe crabs — aquatic arthropods shaped like helmets with long tails — are more akin to scorpions than crabs, and older than dinosaurs. They've been scurrying along the brackish floors of coastal waters for hundreds of millions of years. Their eggs are considered a primary fat source for more than a dozen species of migratory shore birds, according to South Carolina's Department of Natural Resources.

Their value to avoiding infection emerged after scientists researching their immune response injected bacteria into horseshoe crabs in the 1950s. They ultimately developed the LAL test, and the technique has been used since the 1970s to keep medical materials and supplies free of bacteria.

Their biomedical use has been on the rise, with 464,482 crabs brought to biomedical facilities in 2018, according to the Atlantic States Marine Fisheries Commission.

In South Carolina, that’s done only by Charles River, a Massachusetts-based company that tests 55% of world’s injectables and medical devices — like IV bags, dialysis solutions and even surgical cleaning wipes, according to company officials.

Charles River employs local fishermen to harvest the crabs by hand, a process governed by wildlife officials that can only happen during a small annual window, when the creatures come ashore to spawn.

Contractors bring them to the company’s bleeding facilities, then return them to the waters from which they came. During a year, Jordan said his harvesters can bring in 100,000 to 150,000 horseshoe crabs, and still can't satisfy the growing demand.

“We need more, though,” Jordan told McMaster, adding that his company is working with the state to open up more harvesting areas. “The population's steady. ... We need access to more beaches, to get more crabs." 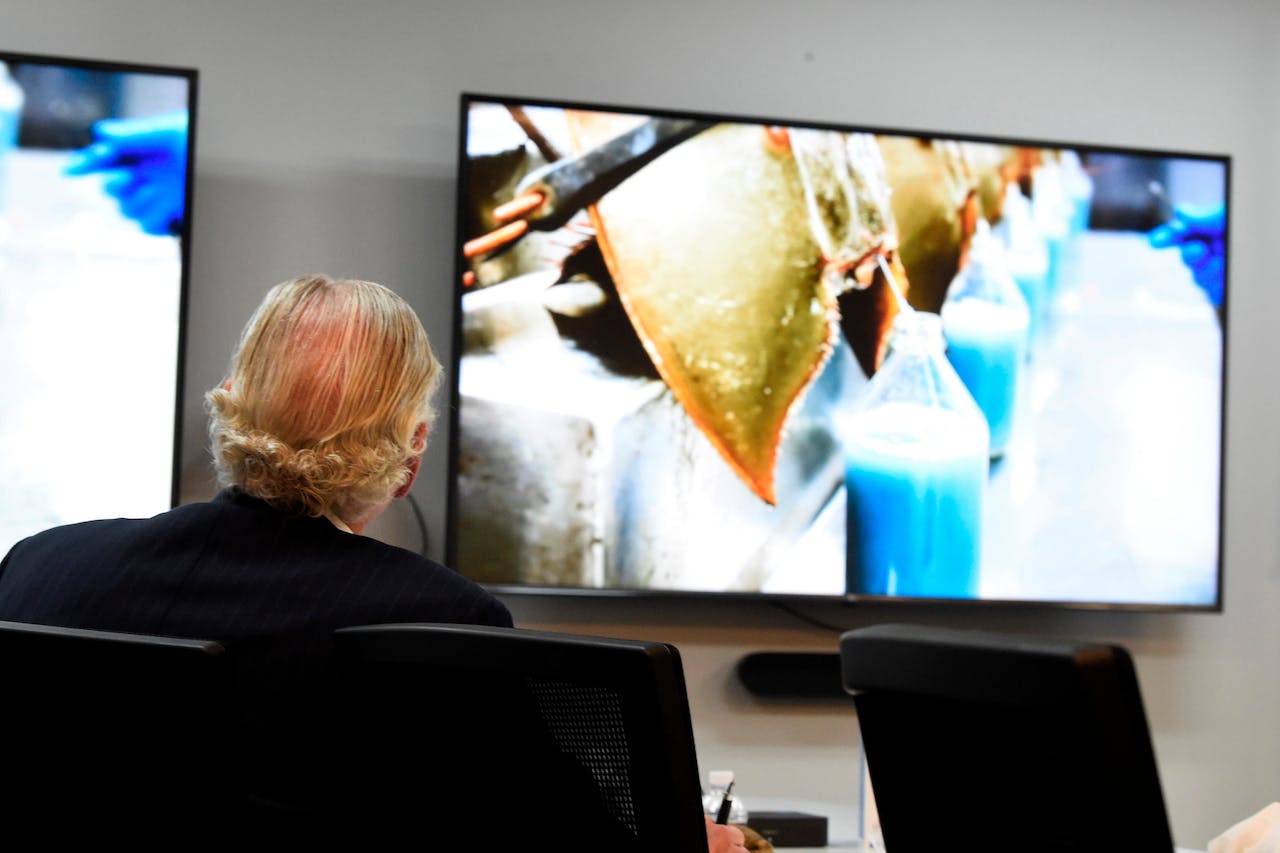 South Carolina Gov. Henry McMaster watches a video on the bleeding of horseshoe crabs, whose blood is a vital component in the contamination testing of injectable medicines - including the coronavirus vaccines - at Charles River Labs on Friday, Aug. 6, 2021, in Charleston, S.C. McMaster says a South Carolina company that bleeds horseshoe crabs for a component crucial to contamination testing of injectable medications is vital to development of a domestic medical supply chain.AP Photo/Meg Kinnard

The practice is not without its critics, some of whom have argued that bleeding the crabs and hauling them back and forth is harmful. According to the National Oceanic and Atmospheric Administration, 10% to 15% of harvested crabs die during the process.

The International Union for Conservation of Nature listed the species overall as “vulnerable," noting decreasing numbers as of a 2016 assessment. The Atlantic States Marine Fisheries Commission listed 2019 stock as “good” in the Southeast, but “poor” in areas around New York.

Conservationists sued last year, accusing the U.S. Fish and Wildlife Service of shirking its duty to protect areas including South Carolina's Cape Romain National Wildlife Refuge by allowing horseshoe crab harvesting. They argued that taking out the crabs affects other species in the protected area. A federal judge temporarily halted the harvest, but was reversed following Charles River's appeal.

The environmental groups asked to withdraw their complaint this month after federal officials imposed a permitting process for any commercial activity in the refuge, including horseshoe harvesting, beginning Aug. 15. Even if such permits are denied, Jordan told McMaster that only 20% of its harvest came from the refuge, with most coming from further down the South Carolina coast.

There is a synthetic alternative to the horseshoe crab blood, but it hasn’t been widely accepted in the U.S., and meanwhile, Charles River’s international competitors are making synthetics and also pressing for U.S. Food and Drug Administration approval, which Jordan said could hamper domestic efforts like his own.

“My mission is to make sure that any competitor that comes into the United States, from China or any of these other producers, has to go through the same regulatory process that we had to go through, to make sure that it’s safe,” Jordan said. “If all these synthetics start coming in from other countries, we’re going to lose the protection that we’ve had for all these years, and the safety, and the control of the drug supply.”

“We want to have as much stuff made here as we can,” McMaster said in response.

As for the environmental concerns, the governor said maintaining a healthy balance between scientific demands and the state's ecosystems, which bolster a significant portion of South Carolina's tourism economy, is paramount.

“It’s like a house of cards. You pull out one part, and the rest of it will fall,” McMaster said. “So I think we have to be very careful, and be sure that any company, any business, any activity, whether it’s commercial or otherwise, meets whatever requirements are there to protect the species — birds, horseshoe crabs, any sort of life.”