This is a first in the field of wearables. 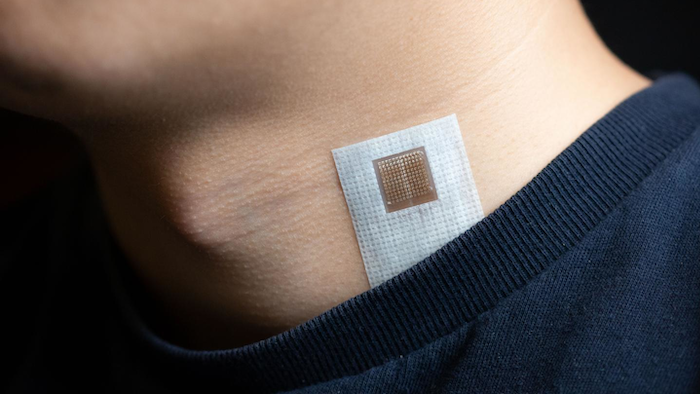 Engineers at the University of California San Diego developed a soft and stretchy ultrasound patch that can be worn on the skin to monitor blood flow through major arteries and veins deep inside a person's body.

Knowing how fast and how much blood flows through a patient's blood vessels is important because it can help clinicians diagnose various cardiovascular conditions, including blood clots; heart valve problems; poor circulation in the limbs; or blockages in the arteries that could lead to strokes or heart attacks.

A team led by Sheng Xu, a professor of nanoengineering at the UC San Diego Jacobs School of Engineering, reported the patch in a paper published July 16 in Nature Biomedical Engineering.

The patch can be worn on the neck or chest. What's special about the patch is that it can sense and measure cardiovascular signals as deep as 14 centimeters inside the body in a non-invasive manner. And it can do so with high accuracy.

"This type of wearable device can give you a more comprehensive, more accurate picture of what's going on in deep tissues and critical organs like the heart and the brain, all from the surface of the skin," said Xu.

"Sensing signals at such depths is extremely challenging for wearable electronics. Yet, this is where the body's most critical signals and the central organs are buried," said Chonghe Wang, a former nanoengineering graduate student in Xu's lab and co-first author of the study. "We engineered a wearable device that can penetrate such deep tissue depths and sense those vital signals far beneath the skin. This technology can provide new insights for the field of healthcare."

Another innovative feature of the patch is that the ultrasound beam can be tilted at different angles and steered to areas in the body that are not directly underneath the patch.

This is a first in the field of wearables, explained Xu, because existing wearable sensors typically only monitor areas right below them. "If you want to sense signals at a different position, you have to move the sensor to that location. With this patch, we can probe areas that are wider than the device's footprint. This can open up a lot of opportunities."

The patch is made up of a thin sheet of flexible, stretchable polymer that adheres to the skin. Embedded on the patch is an array of millimeter-sized ultrasound transducers. Each is individually controlled by a computer--this type of array is known as an ultrasound phased array. It is a key part of the technology because it gives the patch the ability to go deeper and wider. 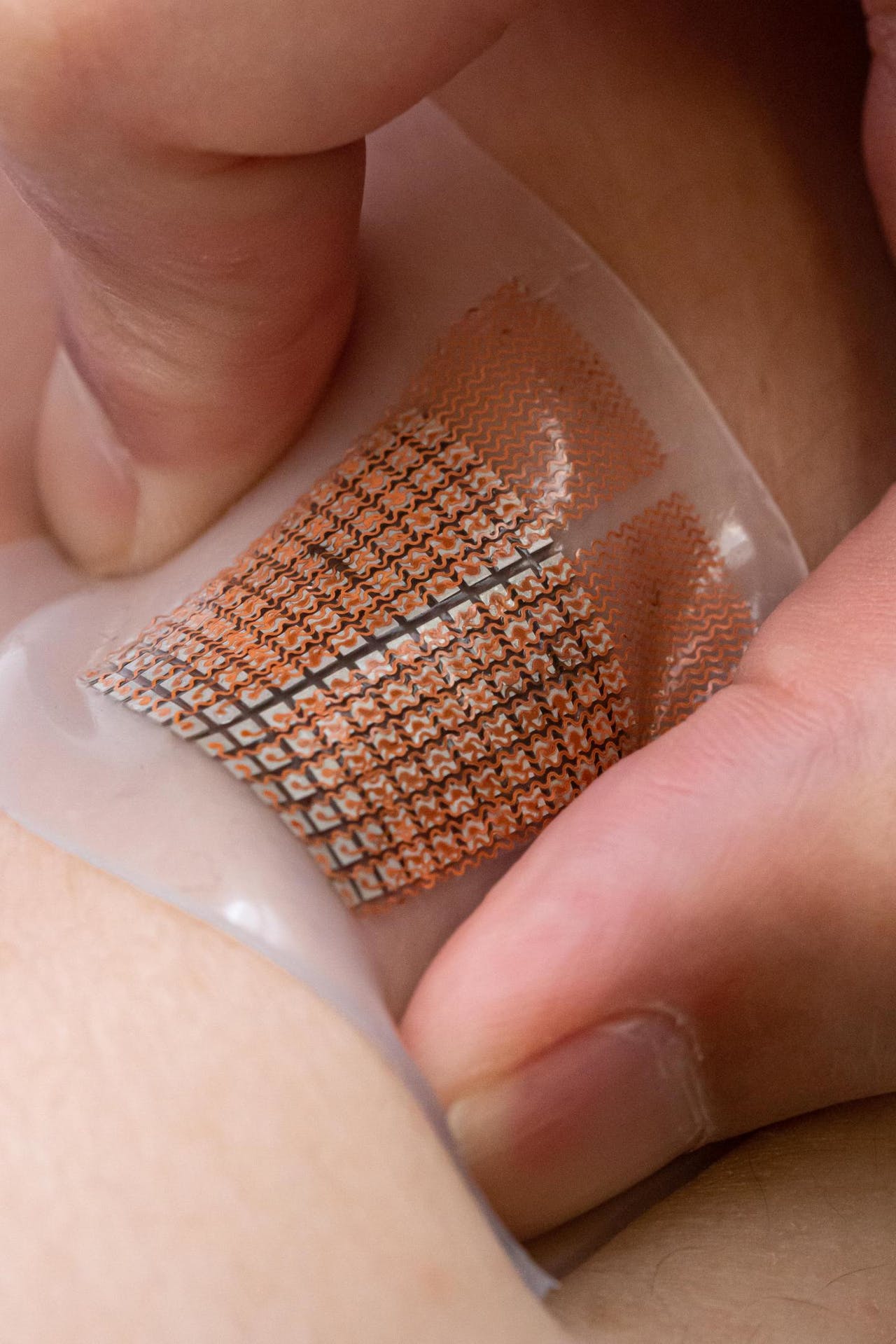 This soft, stretchy skin patch uses ultrasound to monitor blood flow to organs like the heart and brain.Nature Biomedical Engineering

The phased array offers two main modes of operation. In one mode, all the transducers can be synchronized to transmit ultrasound waves together, which produces a high-intensity ultrasound beam that focuses on one spot as deep as 14 centimeters in the body. In the other mode, the transducers can be programmed to transmit out of sync, which produces ultrasound beams that can be steered to different angles.

"With the phased array technology, we can manipulate the ultrasound beam in the way that we want," said Muyang Lin, a nanoengineering Ph.D. student at UC San Diego who is also a co-first author of the study. "This gives our device multiple capabilities: monitoring central organs as well as blood flow, with high resolution. This would not be possible using just one transducer."

The phased array consists of a 12 by 12 grid of ultrasound transducers. When electricity flows through the transducers, they vibrate and emit ultrasound waves that travel through the skin and deep into the body. When the ultrasound waves penetrate through a major blood vessel, they encounter movement from red blood cells flowing inside. This movement changes or shifts how the ultrasound waves echo back to the patch--an effect known as Doppler frequency shift. This shift in the reflected signals gets picked up by the patch and is used to create a visual recording of the blood flow. This same mechanism can also be used to create moving images of the heart's walls.

A potential game changer in the clinic

For many people, blood flow is not something that is measured during a regular visit to the physician. It is usually assessed after a patient shows some signs of cardiovascular problems, or if a patient is at high risk.

The standard blood flow exam itself can be time consuming and labor intensive. A trained technician presses a handheld ultrasound probe against a patient's skin and moves it from one area to another until it's directly above a major blood vessel. This may sound straightforward, but results can vary between tests and technicians. 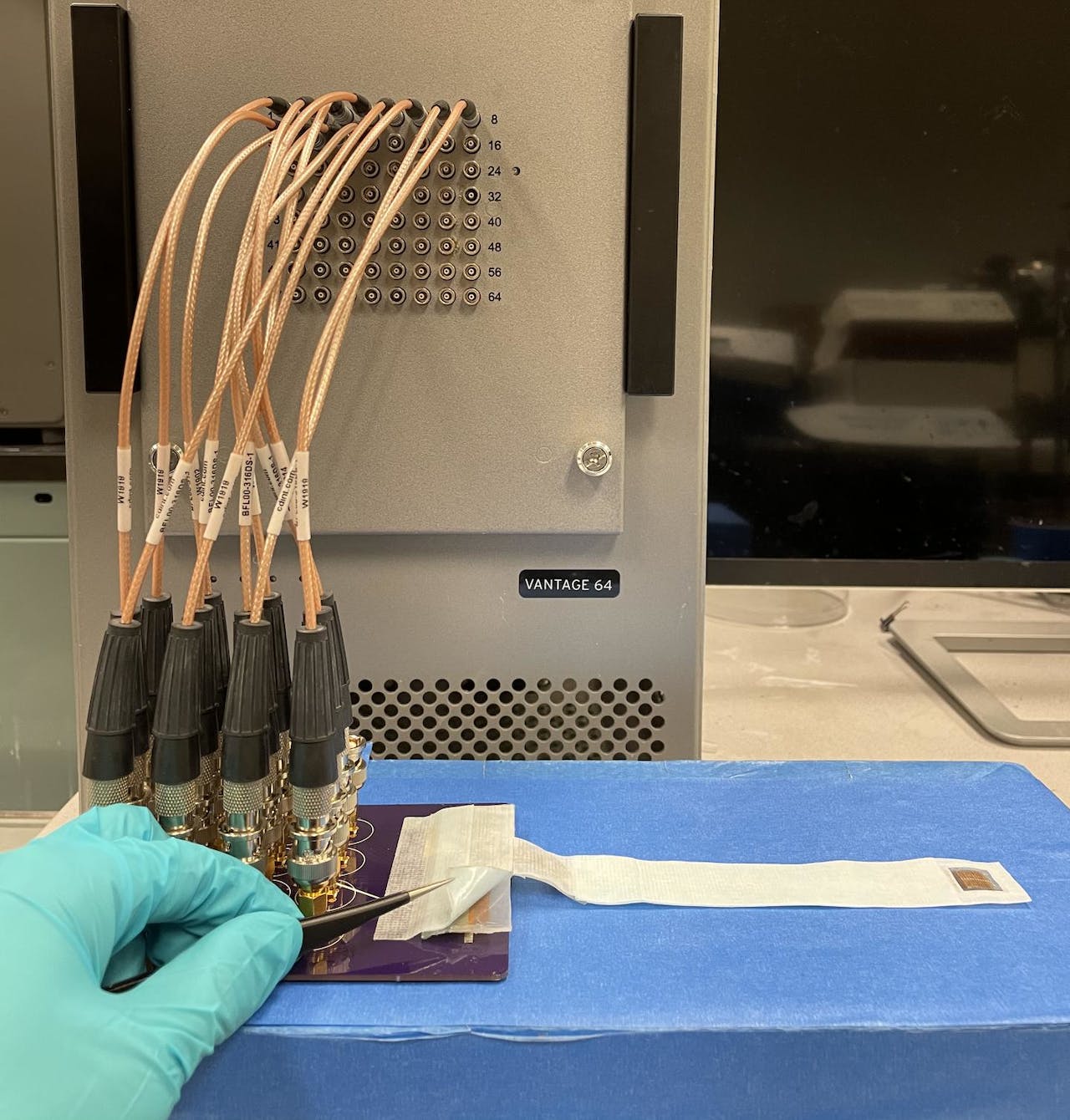 Since the patch is simple to use, it could solve these problems, said Sai Zhou, a materials science and engineering Ph.D. student at UC San Diego and co-author of the study. "Just stick it on the skin, then read the signals. It's not operator dependent, and it poses no extra work or burden to the technicians, clinicians or patients," he said. "In the future, patients could wear something like this to do point of care or continuous at-home monitoring."

In tests, the patch performed as well as a commercial ultrasound probe used in the clinic. It accurately recorded blood flow in major blood vessels such as the carotid artery, which is an artery in the neck that supplies blood to the brain. Having the ability to monitor changes in this flow could, for example, help identify if a person is at risk for stroke well before the onset of symptoms.

The researchers point out that the patch still has a long way to go before it is ready for the clinic. Currently, it needs to be connected to a power source and benchtop machine in order to work. Xu's team is working on integrating all the electronics on the patch to make it wireless.