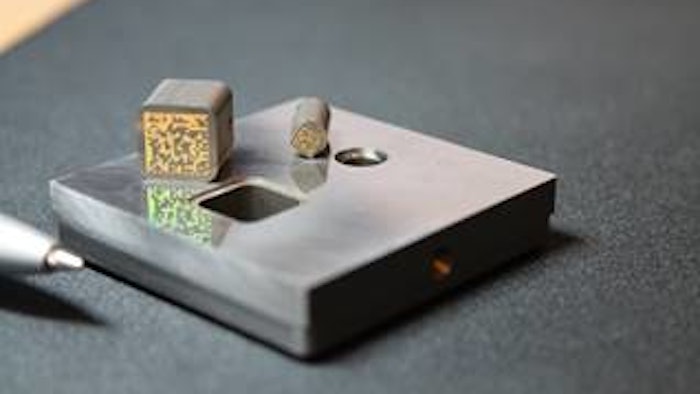 Ready for mainstream use, imZERT™ developed what is being billed as the “world’s smallest barcodes.”

Rel8, a specialist in track and trace, is announcing its North American launch of imZERT direct part marking (DPM) technology that creates barcodes as small as 1mm2. imZERT barcodes enhance traceability for end products reliant upon small, outsourced components, such as automobiles and electronics.

How Rel8 Shrunk the Barcode

imZERT’s industrial track and trace method also benefits sectors where counterfeits can endanger end users, such as pharmaceuticals and electronics or erode brand value and impact profits, such as fashion.

“Historically, small plastic components have largely been left out of the tracking loop because marking them was either unfeasible or cost-prohibitive,” Rel8 CEO Guggi Kofod said. “Our method addresses this hurdle by integrating nanostructures via small, standardized steel pins into an injection mold. The nanostructures are then accurately replicated on plastic parts for 2D barcodes that are optically scannable with a standard camera-equipped smartphone.”

SDKs are readily available from barcode scanning specialists, such as Code Corporation. In testing, Rel8 favored Code’s Cortex Decoder SDK for its point-and-shoot simplicity when scanning barcodes as small as 2mm2 in diverse environments, including dimly-lit production halls.

Rel8’s internal testing verifies that imZERT technology poses zero contamination risk over 150,000+ usage cycles. imZERT barcodes can be used on packaging and inside containers of consumable liquids, such as medication. As such, imZERT usage could bolster end consumer safety in the event of a recall.

imZERT technology is ready to make inroads with European automotive suppliers and medical device manufacturers. And in the U.S., identification and traceability are growing in importance and creating additional need for track and trace solutions, such as imZERT.

For instance, the Food and Drug Administration’s New Era of Smarter Food Safety initiative has an open call for firms to deliver low or no cost traceability products for end users to identify contaminated foods. Similarly, robust track and trace programs are mandatory for medical device makers to maintain FDA compliance.

For more than 20 years, Code Corporation has been an industry pioneer, leader and champion for data capture innovation and has garnered more than 100 patents. By crafting and continuing to perfect its unique decoding algorithms, Code and its line of image-based scanning and decoding technology consistently deliver unparalleled performance that companies around the world depend on every day. Code designs and manufactures a complete line of market-leading hardware and software data capture solutions. Code products are not only valued for providing a consistent level of workflow efficiency year after year, but also for their ergonomic design, durability, ease of customization and seamless integration. Code is headquartered in Salt Lake City, Utah with offices in Boston and Amsterdam.