Nanoscience Center of the University of Jyväskylä 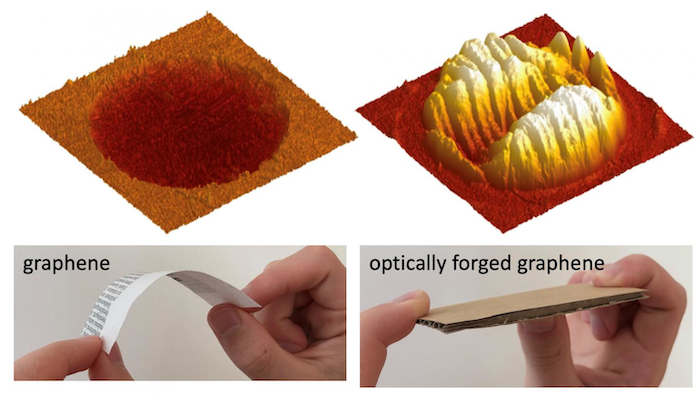 Atomic force microscopy images of the suspended graphene drum skin before and after optical forging (top). Analogue presentation of how a material can become stiffer when it is corrugated (bottom).
University of Jyväskylä/Pekka Koskinen, Vesa-Matti Hiltunen

Graphene is an ultrathin material characterized by its ultrasmall bending modulus, superflimsiness. Now the researchers at the Nanoscience Center of the University of Jyväskylä have demonstrated how an experimental technique called optical forging can make graphene ultrastiff, increase its stiffness by several orders of magnitude. The research was published in npj 2D Materials and Applications in May 2021.

Graphene is an atomically thin carbon material loaded with excellent properties, such as large charge carrier mobility, superb thermal conductivity, and high optical transparency. Its impermeability and tensile strength that is 200 times that of steel make it suitable for nanomechanical applications. Unfortunately, its exceptional flimsiness makes any three-dimensional structures notoriously unstable and difficult to fabricate.

These difficulties may now be over, as a research group at the Nanoscience Center of the University of Jyväskylä has demonstrated how to make graphene ultrastiff using a specifically developed laser treatment. This stiffening opens up whole new application areas for this wonder material.

The measurements revealed that the bending stiffness of graphene increased up to five orders of magnitude compared to pristine graphene, which is a new world record.

"At first, we did not even comprehend our results. It took time to digest what optical forging had actually done for graphene. However, gradually the full gravity of the implications started to dawn on us," says Dr. Andreas Johansson, who led the work on characterizing the properties of the optically forged graphene.

Analysis revealed that the increase in bending stiffness was induced during optical forging by strain-engineering corrugations in the graphene layer. As part of the study, thin-sheet elasticity modeling of the corrugated graphene membranes was performed, showing that the stiffening happens on both the micro- and nanoscales, at the level of the induced defects in the graphene lattice.

Stiffened graphene opens up avenues for novel applications, such as fabrication of microelectromechanical scaffold structures or manipulating mechanical resonance frequency of graphene membrane resonators up to the GHz regime. With graphene being light, strong and impermeable, one potential is to use optical forging on graphene flakes to make micrometer-scale cage structures for intravenous drug transport.

"The optical forging method is particularly powerful because it allows direct writing of stiffened graphene features precisely at the locations where you want them," says Professor Mika Pettersson, who oversees the development of the new technique, and continues, "Our next step will be to stretch our imagination, play around with optical forging, and see what graphene devices we can make."