The six new solar wings will fit over the older ones and boost the station’s power capability by up to 30%. 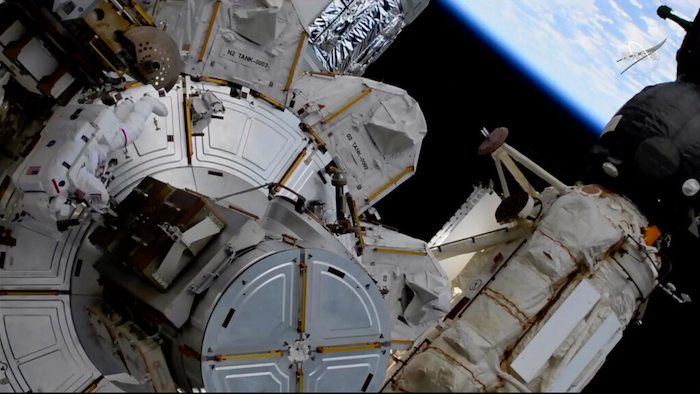 This photo provided by NASA shows US astronaut Kate Rubins outside the International Space Station during a space walk on Friday, March 5, 2021. Rubins and Japan's Soichi Noguchi floated outside to complete unfinished work from Sunday's spacewalk. More mounting brackets and struts need to be installed for new and improved solar panels due to arrive in June.
NASA via AP

CAPE CANAVERAL, Fla. (AP) — For the second time this week, a pair of astronauts floated outside Friday to get the International Space Station ready for new solar panels.

NASA’s Kate Rubins and Japan’s Soichi Noguchi headed toward the unfinished work from Sunday’s spacewalk, located on the far port end of the orbiting lab. They needed to finish installing mounting brackets and struts, and tighten some sticky bolts.

The equipment will support the first set of improved solar panels, due to arrive in June.

NASA is upgrading the space station’s power grid to accommodate more astronauts and experiments, now that SpaceX is launching crews and Boeing should be too by year’s end. The eight solar panels up there now have degraded over time; the oldest were launched 20 years ago.

The six new solar wings — smaller but more efficient — will fit over the older ones and boost the station’s power capability by up to 30%. Boeing is supplying the panels, which will be launched in pairs by SpaceX over the next year.

During Sunday’s spacewalk, Rubins and NASA astronaut Victor Glover encountered a number of stubborn bolts that prevented them from completing the support set-up.

NASA decided the leftover work was more important than the other chores that had been scheduled for Friday’s spacewalk, namely venting and rearranging hoses for ammonia coolant. Future spacewalkers will deal with that.

The latest spacewalk should be the last for the station’s current residents, whose half-year missions are coming to a close.

Rubins will return to Earth in mid-April in a Russian capsule, along with two Russians. Noguchi, Glover and two other NASA astronauts will fly SpaceX back in late April or May.