A mister no more. 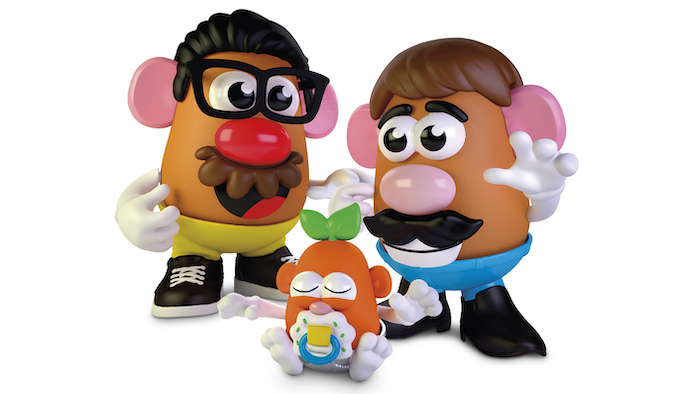 This photo provided by Hasbro shows the new Potato Head world. Mr. Potato Head is no longer a mister. Hasbro, the company that makes the potato-shaped plastic toy, is giving the spud a gender neutral new name: Potato Head. The change will appear on boxes this year.
Hasbro via AP

Hasbro, the company that makes the potato-shaped plastic toy, is giving the spud a gender neutral new name: Potato Head. The change will appear on boxes this year.

Many toymakers have been updating their classic brands in recent years, hoping to relate to today's kids and reflect more modern families.

“It’s a potato,” said Ali Mierzejewski, editor in chief at toy review site The Toy Insider. “But kids like to see themselves in the toys they are playing with.”

As part of the rebranding, Hasbro will release a new Potato Head playset this fall that will let kids create their own type of families, including two moms or two dads. The Mr. and Mrs. Potato Head characters will live on in some form, Hasbro said, but didn't provide details. Both have appeared in the “Toy Story" movies.

Dropping the “Mr.” from its name could encourage other companies to stop assigning genders to its toys, a trend that has already been happening, said Mierzejewski. Barbie maker Mattel released a gender-neutral doll line in 2019. But Mr. Potato Head is one of the biggest brands to do so.

Mr. Potato Head first hit the toy scene in 1952, when it didn’t even come with a plastic potato — kids had to supply their own vegetable to poke eyes, a nose or mustache into. Hasbro, which also makes Monopoly and My Little Pony, bought the brand and eventually added a plastic potato.

Brian Goldner, Who Led Transformation at Hasbro, Dies at 58