A Black engineer's take on personal and professional inspiration. 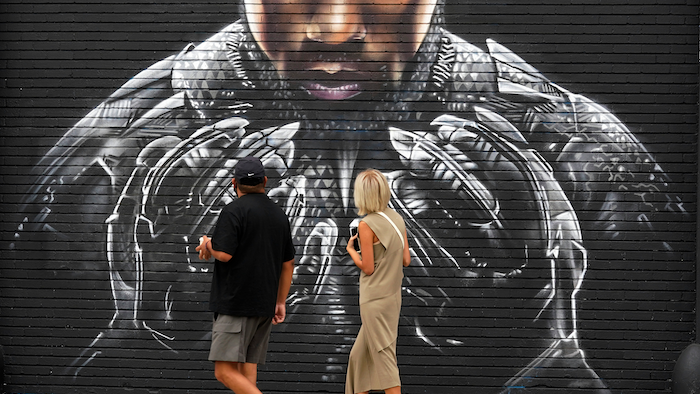 Chadwick Boseman played a superhero on the big screen, but he had a real-life superpower – the ability to inspire the next generation of underrepresented scientists, engineers and innovators. He was one of many people lost too soon in 2020, but his legacy will live on.

I’m biracial – Black and white – but primarily identify as Black, in part because that’s how other people have always identified me. I’m also an engineer, scientist, educator, inventor and entrepreneur who has drawn great inspiration from Boseman.

On and off the screen, he championed Black representation and embodied Black excellence. From the scientists of the fictional country of Wakanda to the supersuit he wore as the superhero Black Panther, the cinematic world he brought to life mirrors my own vision: a world of increased inclusion and diversity in STEM, one where real-life exosuits are commonplace and empower people of all abilities.

I grew up in a community with few other faces like mine. I don’t recall having any Black teachers in school or any Black professors I took classes from in college. Fortunately I had an older brother who looked like me to admire and who blazed a trail, becoming an engineer a few years before me. But for most of my life, I rarely saw Black engineers or scientists in the real world or popular culture except in an occasional article, poster or TV segment in February, Black History Month. In retrospect those were mostly about George Washington Carver, a science rock star, but it became a bit repetitive.

Against this backdrop, the world of Wakanda that Boseman helped bring to life in the movie “Black Panther” was something out of this world for me. It was a portrayal of a society where being young, Black and gifted was the norm, and these individuals were implicitly accepted and respected as scientists, engineers, innovators and intellectuals.

It was the kind of portrayal in a blockbuster movie that I do not recall seeing, ever. I believe that everyone, particularly the next generation of Black, biracial and other underrepresented science, technology, engineering and math students, will draw inspiration from this portrayal, either consciously or subconsciously.

On Twitter, Black in Engineering was launched in the week leading up to Boseman’s passing in August 2020, and Black in Computing was launched two months earlier. The same cathartic experience of seeing Wakandan scientists and engineers on the big screen is how I felt reading all the posts tagged #BiERollCall – Black engineers and scientists across STEM disciplines introduced themselves and their work, their passions and their expertise. And a sea of allies and advocates amplified these voices – including MC Hammer, who was throwing out retweets the way he used to throw out dance moves.

Representation matters, and the entertainment industry provides a powerful influence on societal norms that inspire young people to pursue career paths that they might not have otherwise considered. Beyond the silver screen, Boseman carried himself as a role model, too. He was an advocate for Black excellence, aspiration and inclusion. He was willing and able to use his platform to bring attention to problems of opportunities, resources and underrepresentation that exist in two quite different industries: film and STEM.

I aim to live up to his legacy by being a more vocal advocate for inclusion and a role model for young scientists, engineers and inventors of all races, ethnicities and genders – even the ones who don’t yet know the STEM field is their calling.

Professionally, I’ve long had my eye on bringing wearable technology like Black Panther’s vibranium supersuit off the screen and into real life. I’ve spent the past 13 years developing bionic limbs for individuals with amputations, exoskeletons for those with disabilities and exosuits for people who do backbreaking work for a living.

In the Marvel cinematic universe, vibranium is the metal used for Black Panther’s supersuit because of its ability to manipulate energy. With the suit, Black Panther can absorb, store and release kinetic energy, making the suit both protective and assistive.

Interestingly, much of the kinetic energy people encounter in daily life comes from inside their own body, not from the outside world. This is because muscles generate huge forces. For instance, if you lift a 25-pound box, your back muscles generate over 500 pounds of force – 20 times the weight of the box – to impart

When my students, colleagues and I build exosuits in our biomechanics lab using elastomers, textiles and alloys, we’re essentially designing real-life vibranium supersuits that generate, alter and absorb kinetic energy. For instance, we invented a 3-pound exosuit that takes 50 pounds of strain off back muscles each time the wearer bends or lifts, which amounts to tens of thousands of pounds of back relief each day for people in strenuous jobs like construction, logistics and agriculture.

Just as importantly, our textile-based design fits like clothing, and assistance can be turned off so the exosuit stays out of the way when the wearer doesn’t need it. Our goal is to improve lives by keeping people healthy, safe and physically active, whether it’s helping a paralyzed person walk or reducing physical overexertion experienced by an essential worker.

We are taking what was once science fiction and transforming it into a tangible impact on society and, in the process, encouraging inclusion and diversity throughout STEM. This is what Boseman did for so many, and this is the legacy I hope we all can emulate.

This article is republished from The Conversation under a Creative Commons license. Read the original article here: https://theconversation.com/chadwick-bosemans-black-panther-gives-a-boost-to-diversity-in-stem-a-black-engineers-take-on-personal-and-professional-inspiration-151983.