This is no ordinary space shammy. 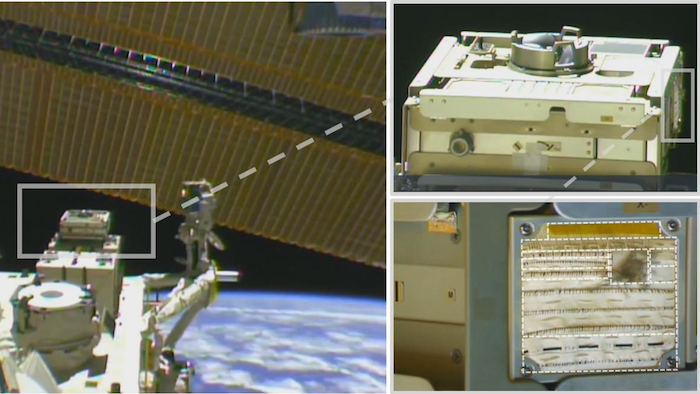 Researchers at the Army's Institute for Soldier Nanotechnologies at the Massachusetts Institute of Technology develop an acoustic fabric being tested on the International Space Station could be used to develop space dust telescopes and allow astronauts to feel through their pressurized suits.
pace BD/JAXA, Composite by Juliana Cherston, MIT

RESEARCH TRIANGLE PARK, N.C. --- An Army-funded smart fiber being tested on the International Space Station could be used to develop space dust telescopes and allow astronauts to feel through their pressurized suits.

Researchers at the Army's Institute for Soldier Nanotechnologies at the Massachusetts Institute of Technology developed an acoustic fabric so sensitive to vibrations that it can detect impacts from microscopic high velocity space particles. A more earthly application of these fabrics could be for blast detection and in the future act as sensitive microphones for directional gunshot detection.

The fabric system contains thermally drawn vibration-sensitive fibers that are capable of converting mechanical vibration energy into electric energy. When micrometeoroids or space debris hit the fabric, the fabric vibrates, and the acoustic fiber generates an electrical signal.

"This is an exquisite example of harnessing nanoscience for technology development that bridges the physical and digital domains," said James Burgess, ISN program manager for the Army Research Office, an element of the U.S. Army Combat Capabilities Development Command, now known as DEVCOM, Army Research Laboratory. "Delivering revolutionary methodologies that result from foundational science is always one of our main priorities, and the opportunity to collect data from space dust using a fiber sensor as a key building block of the system is truly exciting."

The U.S. Army established the ISN in 2002 as an interdisciplinary research center devoted to dramatically improving the protection, survivability, and mission capabilities of the Soldier and Soldier-supporting platforms and systems.

The acoustic fiber was developed through ISN projects aimed at building next-generation fibers and fabrics for Soldier uniforms and battle gear that could detect a variety of physiological parameters such as heart rate and respiration as well as external sounds like gunshots and explosions.

"Traditional telescopes use light to learn about distant objects; this fabric uses space dust analysis to learn about space," said Dr. Yoel Fink, professor of Materials Science and Electrical Engineering at MIT. "This is a great example of how ISN projects allow us to be highly responsive to opportunities and meet challenges far beyond what we initially imagined."

MIT graduate student Juliana Cherston, the project's leader, applied another piece of ISN technology--the Laser-induced Particle Impact Test array, which uses lasers to accelerate tiny particles to supersonic or even hypersonic speeds, and allows researchers to image and analyze their impact on target materials--to demonstrate that the fabric system could accurately measure the impulse of small particles travelling at hundreds of meters per second.

Scientists are now using ISN facilities to test the sensitivity of the acoustic fabric for impacts from micro-particles with similar kinematics as certain types of high velocity space dust. Simultaneously, researchers are baselining the fiber sensor's resiliency to the harsh environment of Low Earth Orbit on the International Space Station.

For this initial launch, the research team worked with the Japan Aerospace Exploration Agency and Japanese company Space BD to send a 10 cm by 10 cm sample of the high-tech fabric to the International Space Station, where it was installed on an exterior wall, exposed to the rigors of space. The fabric sample, unpowered for now, will remain on the orbiting laboratory for one year, in order to determine how well these materials survive the harsh environment of low Earth orbit.

"Thermally drawn multi-material fibers have been developed by our research group at MIT for more than 20 years," said Dr. Wei Yan, postdoc in MIT's Research Laboratory of Electronics and the Department of Materials Science and Engineering. "What makes these acoustic fibers special is their exquisite sensitivity to mechanical vibrations. The fabric has been shown in ground facilities to detect and measure impact regardless of where the space dust impacted the surface of the fabric."

The white surface of the International Space Station is actually a protective fabric material called Beta cloth, a Teflon-impregnated fiberglass designed to shield spacecraft and spacesuits from the severity of the elements more than 250 miles above the Earth's surface.

The research team believes the acoustic fabric could lead to large-area fabrics that accurately measure the impulse on spacecraft of micrometeoroids and space debris travelling at kilometers per second. The smart fabrics may also help provide astronauts with a sense of touch through their pressurized suits by providing sensory data from the exterior of the suit and then mapping that data to haptic actuators on the wearer's skin.

In one year, these samples will return to Earth for post-flight analysis. The researchers will measure any erosion from atomic oxygen, discoloration from ultraviolet radiation, and changes to fiber sensor performance after one year of thermal cycling.

"It's easy to assume that since we're already sending these materials to space, the technology must be very mature," Cherston said. "In reality, we are leveraging the space environment to complement our important ground-testing efforts. Our focus is on baselining their resiliency to the space environment."