New results suggest it's safe and about 70% effective. 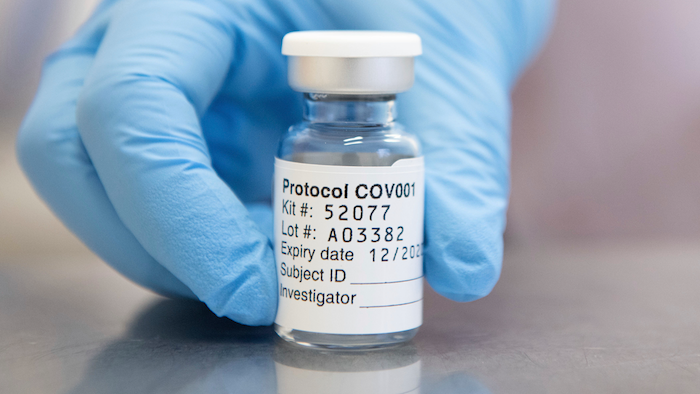 This undated file photo issued by the University of Oxford on Monday, Nov. 23, 2020, shows of vial of coronavirus vaccine developed by AstraZeneca and Oxford University, in Oxford, England. New results released Tuesday, Dec. 8, 2020, on the possible COVID-19 vaccine suggest it is safe and about 70% effective.
John Cairns/University of Oxford via AP, File

New results on a possible COVID-19 vaccine from Oxford University and AstraZeneca suggest it is safe and about 70% effective, but questions remain about how well it may help protect those over 55 — a key concern for a vaccine that health officials hope to rely on around the world because of its low cost, availability and ease of use.

Still, experts say the vaccine seems likely to be approved, despite some confusion in the results and lower levels of protection than what some other vaccine candidates have shown.

“What we can see looks reasonable, but it’s a bit more complicated than what we’ve seen so far,” said Dr. Buddy Creech, a Vanderbilt University researcher helping to test two other vaccines. “If this had been the first report out, the field would have still been excited to have a vaccine.”

The medical journal Lancet on Tuesday published partial results from tests of the vaccine in the United Kingdom, Brazil and South Africa — safety results on 23,745 participants and protection levels on 11,636.

They’re hard to interpret because a mistake led some participants to get a half dose followed by a full one rather than two full doses as intended.

Researchers claim the vaccine protected against disease in 62% of those given two full doses and in 90% of those initially given the half dose. However, independent experts have said the second group was too small — 2,741 people — to judge the possible value of that approach and that more testing is needed.

The half-dose group also didn’t include anyone over 55, and among others in the study, only about 12% were in that age group. Older people also were enrolled later, so there hasn't been enough time to see whether they develop infections at a lower rate than those not given the vaccine.

It’s unclear if the results will be enough to lead regulators in the United Kingdom and elsewhere to approve its use right away.

“We have no safety concerns about the vaccine,” with no hospitalizations or severe disease among those who received it, and results from all study locations consistently showing benefit, said one study leader, Oxford’s Andrew Pollard.

“The only way we get the pandemic behind us is if we get doses of vaccine out there,” he said.

AstraZeneca’s Mene Pangalos called the results “very compelling" and said they "clearly show we have an effective vaccine” that meets criteria for approval around the world. “I really believe this vaccine will have a big impact on the pandemic,” he said.

In the study, 10 people were hospitalized for COVID-19, none of whom received the vaccine. Two were considered severe cases, and one person died.

There were three serious side effects — a neurological problem in one person given the vaccine, anemia in one from the placebo group and severe fever in a participant whose receipt of vaccine or comparison shots is not yet known. All have recovered.

The results come the same day that Britain started giving another vaccine, from Pfizer and Germany’s BioNTech. That vaccine and another developed by U.S. government scientists and made by Moderna Inc. seem about 95% effective in results announced so far. They work differently than AstraZeneca’s, which was developed by Oxford.

“Personally I’d be happy with any of these in my arm," Pollard said.

Hopes are high for the AstraZeneca vaccine because it can be shipped and stored at normal refrigerator temperatures unlike the others that require freezing until a few hours before they're given.

In June, AstraZeneca said it could produce about 2 billion doses of the vaccine every year, with about half of that contracted to India’s Serum Institute for use in the developing world. AstraZeneca has also signed licensing deals for the vaccine to be produced in countries including Brazil, South Africa and China. COVAX, the global initiative led by the World Health Organization and vaccines alliance Gavi aimed at distributing COVID-19 vaccines to poorer countries, has signed an agreement to obtain about 700 million doses of the AstraZeneca vaccine.