These four-person semi-inflatable structures might soon be found on the lunar surface. 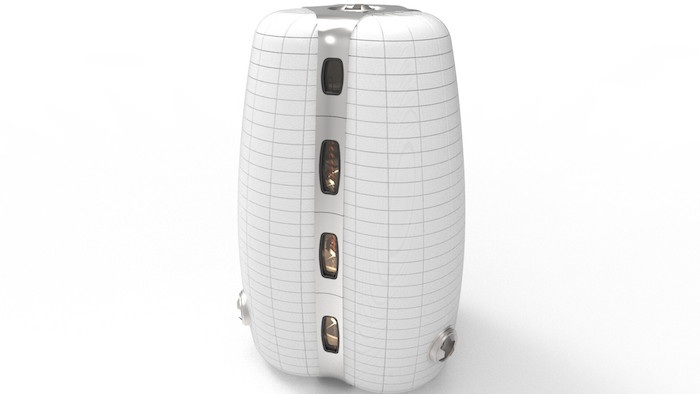 Renowned architectural firm Skidmore, Owings & Merrill, originator of many of the world’s tallest skyscrapers, has been working on an even more challenging design: a habitat for a future Moon Village. Their proposal has undergone rigorous examination by European Space Agency (ESA) experts at the Agency’s mission-evaluating Concurrent Design Facility.

This review process flagged various issues but found no show-stoppers – which mean something resembling the company’s innovative, four-person semi-inflatable structure might well end up on the lunar surface in years to come.

Skidmore, Owings & Merrill (SOM) consulted with faculty at MIT’s Department of Aeronautics and Astronautics as well as ESA on their habitat design study. It was inspired by ESA Director General Jan Wörner’s vision of an international Moon Village developed through an alliance of private and public, space and non-space partners.

Work began on the study in 2018, but this year saw the habitat’s design blueprint undergo a six-session study at ESA’s Concurrent Design Facility (CDF). Located at the Agency’s technical heart, in Noordwijk, the Netherlands, the CDF brings together a network of space specialists to perform rapid evaluations of novel mission concepts and create workable blueprints.

“The value of these CDF sessions is that they can run our design past every expert that’s needed in real time,” says Daniel Inocente, study leader at SOM. “It’s been a great experience because we’ve been able to discover the limiting factors involved in designing for the Moon within a short time, take those on board and identify potential responses.”

“This study is clearly looking into the future, beyond the horizon of currently planned lunar exploration activities,” explains Advenit Makaya, study leader at ESA. “But it has been a very interesting exercise for the various ESA experts, to collaborate with architecture experts, to identify and address the drivers and ways in which this innovative design could be deployed on the Moon.”

“The collaboration on this project, combining best ideas and expertise from the SOM and the ESA experts, is a very good example of how ESA wishes not only to develop future programs, but also to be an enabler for other initiatives contributing to the common good,” comments Isabelle Duvaux-Béchon, from ESA’s Policy and Programs Coordination Department.

Inflatability for maximum space in space

Taking the inflatable BEAM module currently attached to the International Space Station as a starting point, SOM has designed a semi-inflatable shell structure to offer the highest possible volume to mass ratio. Once inflated on the lunar surface, it would reach approximately double its original internal volume.

Daniel explains: “On the inside we thought hard about the human experience, in terms of lighting conditions, flexible architecture that can be reconfigured as needed, and also high floor to ceiling space – lunar one-sixth G  means crew members can reach up much higher, and we encourage that using grabbing bars and other simple aids. Retired NASA astronaut Jeffrey Hoffman, Professor at MIT’s Department of Aeronautics and Astronautics, gave us feedback on improving the living and working space from his personal experience.”

Its chosen site has been described as the most desirable real estate in the Solar System: the rim of Shackleton crater beside the lunar South Pole. Avoiding the crippling temperature extremes of the Moon’s two-week days and nights, this location offers near-continuous sunlight for solar power, an ongoing view of Earth and access to lunar water ice deposits in adjacent permanently-shadowed craters.

The four-story habitat would be inflated either locally by astronauts or else via rovers teleoperated from the Gateway station around the Moon. It would keep its four person crew alive and comfortable for up to 300 days at the time. 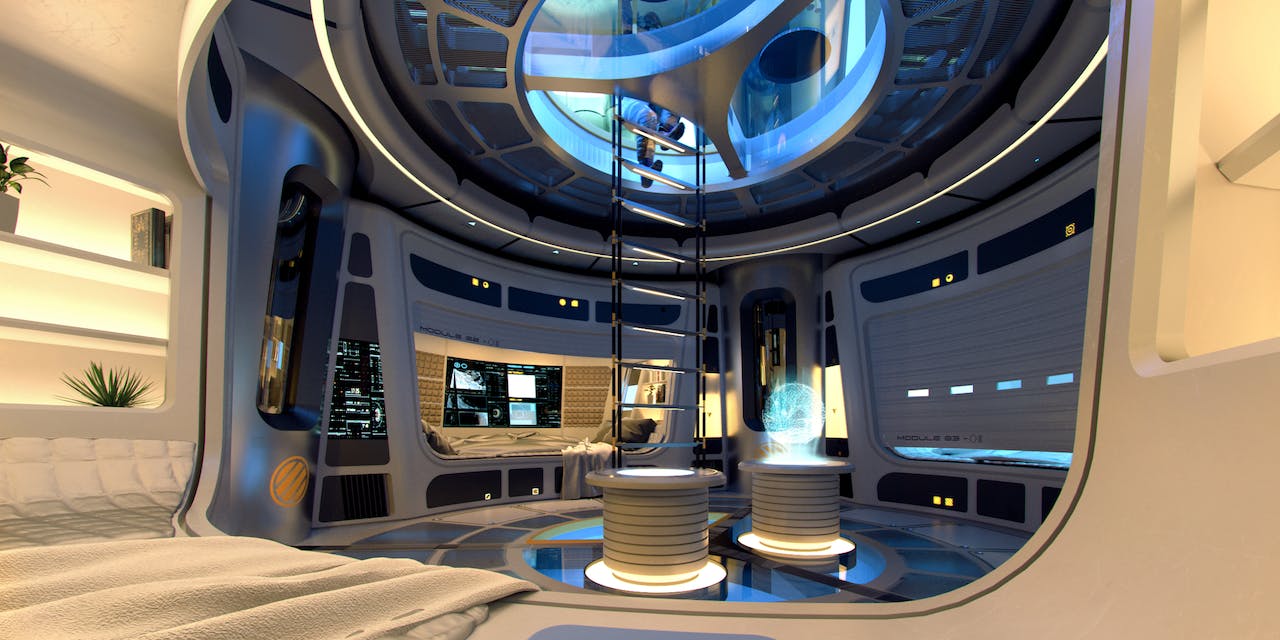 Originally the design planned for a 500 day stay but this target had to be reexamined due to of one of the most challenging constraints of life on the Moon: radiation. Because the Moon is well outside Earth’s protective magnetic shield for the majority of its orbit it is subject to ionizing radiation from the Sun and deep space.

“The CDF radiation analysis gave us a better indication of exposure and duration limits, so we had to change our baseline goal,” comments Daniel.

“Similarly, initially we planned to have the crew quarters on an upper floor, but shifted it to a lower level, to double as the crew shelter against solar storms. This level would also store our life support system, affording extra radiation shielding. There’s also the possibility of lining the structure with lunar material or else locally-sourced water, to boost crew protection still further.”

With an eye on the future, the habitat combines traditional life support systems with regenerative closed-loop systems, worked on through ESA’s long-running MELiSSA program, with the added advantage of allowing food to be grown in-situ.

The habitat’s power needs – estimated at 60 kilowatts from ISS experience  – would be fulfilled using either an adjacent solar power farm or a surface-deployed fission reactor.

Equally important would be the radiators, needed to dump waste heat and maintain a comfortable shirtsleeves internal temperature of 22°C. The CDF team, drawing on past experience of ESA’s Rosetta comet chaser, proposed adding closable ‘louvres’ to control radiator emissivity during brief but chilly polar nights. 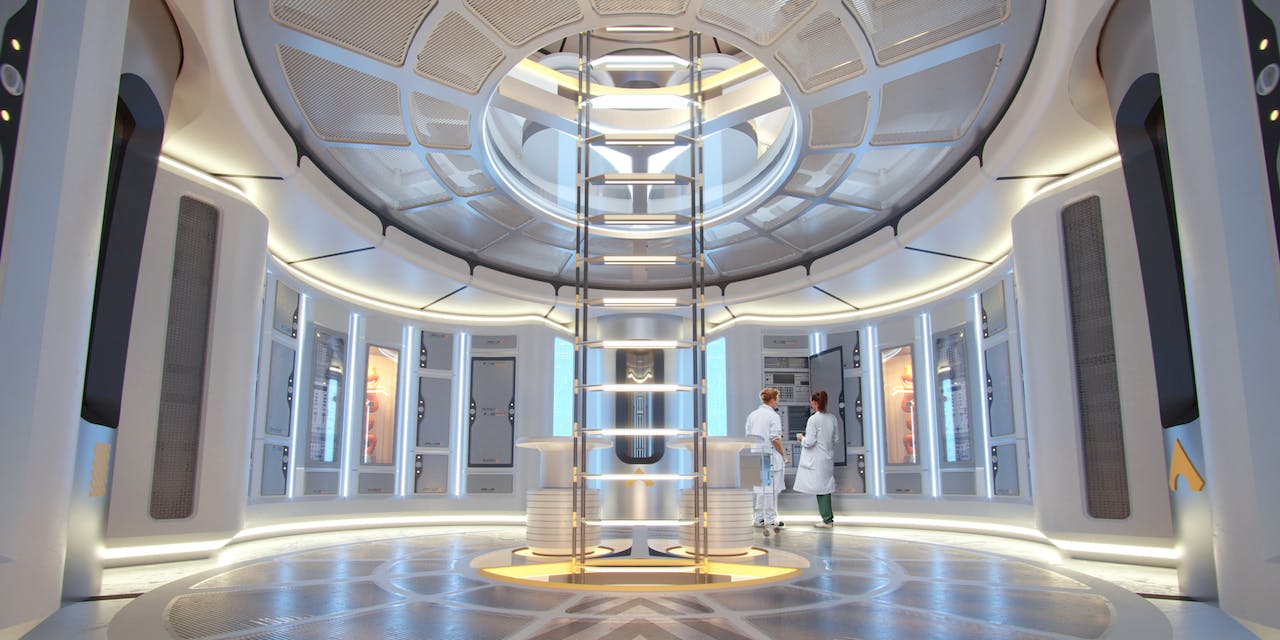 Interior of a lunar habitat module, intended as part of a future international ‘Moon Village’. The study was performed in partnership with the Department of Aeronautics at MIT and US architecture, interior design, engineering and urban planning firm Skidmore, Owings and Merrill (SOM). Their innovative proposal is an inflatable structural shell technology to be placed on the rim of Shackleton Crater near the lunar South Pole, offering access to near-continuous sunlight and lunar water iceESA/SOM

Another key design driver is minimizing contact with clingy, abrasive lunar dust. As Daniel explains: “We would actually land the habitat quite some distance away from its final destination and transport it into place overland, because the lander touchdown will drive up a lot of dust, which is harmful to both people and equipment. And the habitat would interface with separate airlock shells devoted to dusting off spacesuits and equipment, to really mitigate the amount of dust into the habitat.”

One of the biggest challenges the CDF flagged is actually getting there. The habitat, including all its pre-fitted internal equipment, would have a mass exceeding 58 tonnes, which would be beyond the scope of currently operating launch vehicles.

Daniel adds: “Looking beyond the near term, we considered two options, one of which is NASA’s forthcoming Space Launch System launcher, and the other is SpaceX’s Starship, which would have no trouble with our mass requirements but is still at an early stage of development.”

Once the first habitat is in place, the SOM team envisages additional modules joining it in turn, customized for specific functions such as research, manufacturing, food culture and tourism – allowing the base to expand into a village, then eventually a city.

As Daniel concludes: “We were only working on the Moon Village part time, but the project has informed our thinking on large terrestrial buildings like skyscrapers and airports in both a qualitative and quantitative way. On Earth the demands aren’t so absolute as space, but the experience offers ways to improve our design methodologies, such as selecting materials, integrated building technologies and minimizing environmental impacts.

“And the effort of designing this habitat is useful in its own right. It would be extremely costly to build and technically challenging but it is conceivable given the rate of improvement in technology and engineering and provides us with a goal to aspire towards – just like planning to build the next, tallest skyscraper or planning a terrestrial city of the future.”