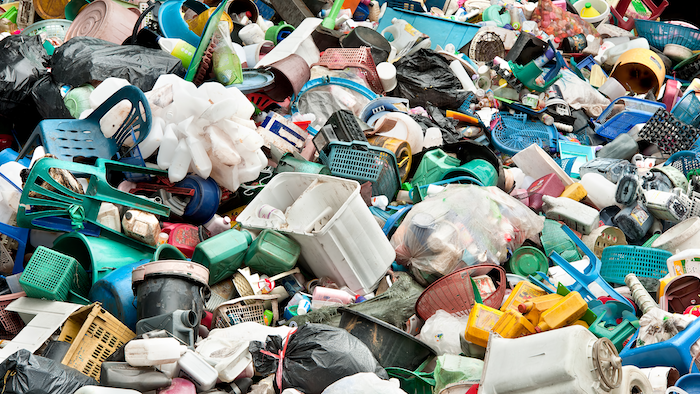 If you thought those flimsy disposable plastic grocery bags represented most of our plastic waste problem, think again. The volume of plastic the world throws away every year could rebuild the Ming Dynasty’s Great Wall of China – about 3,700 miles long.

In the six decades that plastic has been manufactured for commercial uses, more than 8.3 billion metric tons have been produced. Plastics are light, versatile, cheap and nearly indestructible (as long as they don’t get too hot). These properties make them incredibly useful in an enormous range of applications that includes sterile food packaging, energy-efficient transportation, textiles and medical protective gear. But their indestructible nature comes at a cost. Most of them decompose extremely slowly in the environment – on the order of several hundred years – where they are creating a global epidemic of plastic trash. Its consequences for human and ecosystem health are still incompletely known, but are potentially momentous.

I am a chemist with experience in designing processes for making plastics, and I became interested in using plastic as a large, untapped resource for energy and materials. I wondered if we could turn plastic waste into something more valuable to keep it out of landfills and the natural environment.

A new way to use plastic waste

Plastics are made by stringing together a large number of small, carbon-based molecules in an almost infinite variety of ways to create polymer chains.

To reuse these polymers, recycling facilities could, in principle, melt and reshape them, but plastics’ properties tend to deteriorate. The resulting materials are almost never suitable for their original use, although they can be used to make lower-value stuff like plastic lumber. The result is a very low effective rate of recycling.

A new approach involves breaking the long chains down into small molecules again. The challenge is how to do this in a precise way.

Since the process of making the chains in the first place releases a lot of energy, reversing it requires adding a large amount of energy back in. Generally this means heating up the material to a high temperature – but heating up plastic causes the stuff to turn into a nasty mess. It also wastes a lot of energy, meaning more greenhouse gas emissions.

My team at UC Santa Barbara, working with colleagues at the University of Illinois Urbana-Champaign and Cornell, discovered a clean way to turn polyethylene into useful smaller molecules.

Polyethylene is one of the world’s most useful and most used plastic types. It is also one of the largest contributors to plastic waste. It represents a third of the nearly 400 million metric tons of plastic the world makes every year, for purposes ranging from sterile food and medical packaging, waterproof films and coatings, cable and wire insulation, construction materials and water pipes, to wear-resistant hip and knee replacements and even bulletproof vests.

How the new process works

The process we have developed does not require high temperatures, but instead depends on tiny amounts of a catalyst containing a metal that removes a little hydrogen from the polymer chain. The catalyst then uses this hydrogen to cut the bonds that hold the carbon chain together, making smaller pieces. 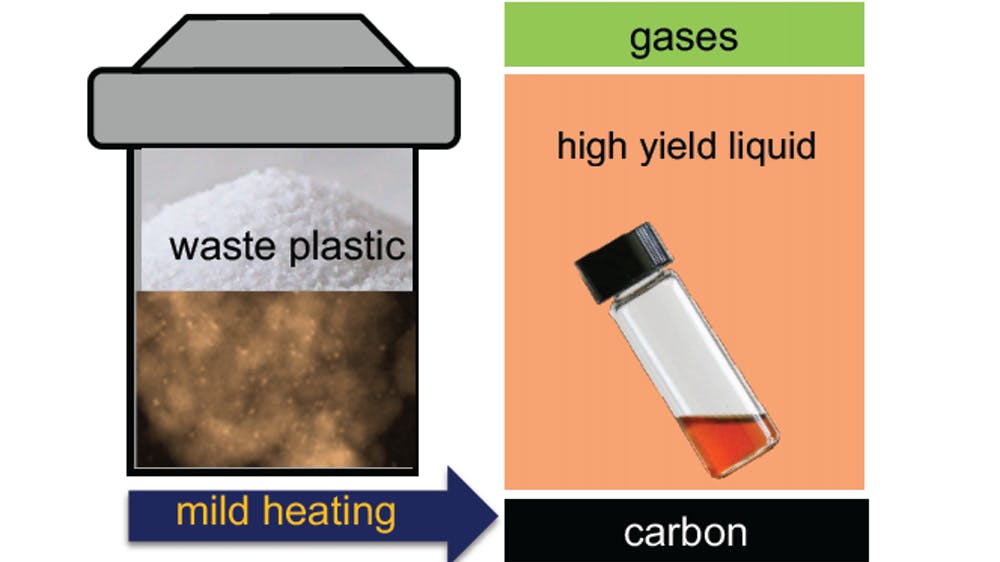 A simple one-pot process turns polyethylene plastic waste into valuable liquids when it is exposed to a solid chemical catalyst and a little heat.Fan Zhang, UCSB, CC BY-SA

The key is using the hydrogen as soon as it forms so that the chain-cutting provides the energy for making more hydrogen. This process is repeated many times for each chain, turning the solid polymer into a liquid.

The chopping slows down naturally when the molecules reach a certain size, so it’s easy to prevent the molecules from becoming too small. We’re able to recover the valuable liquid before it turns into less useful gases.

A majority of the molecules in the recovered liquid are alkylbenzenes, which are useful as solvents and can easily be turned into detergents. The global market for this type of molecule is about US$9 billion annually.

Turning waste plastic into valuable molecules is called upcycling. Although our study represented a small-scale demonstration, a preliminary economic analysis suggests that it could easily be adapted to become a much larger-scale process in the next few years. Keeping plastic out of the environment by reusing it in a way that makes good economic sense is a win-win.

This article is republished from The Conversation under a Creative Commons license. Read the original article here: https://theconversation.com/most-plastic-recycling-produces-low-value-materials-but-weve-found-a-way-to-turn-a-common-plastic-into-high-value-molecules-148506.