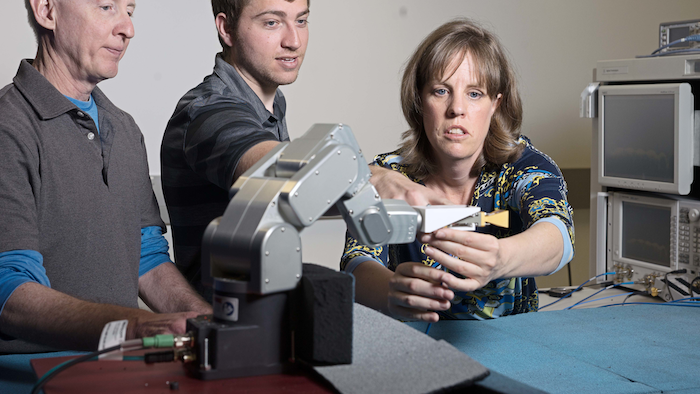 Engineers at the National Institute of Standards and Technology (NIST) have developed a flexible, portable measurement system to support design and repeatable laboratory testing of fifth-generation (5G) wireless communications devices with unprecedented accuracy across a wide range of signal frequencies and scenarios.

The system is called SAMURAI, short for Synthetic Aperture Measurements of Uncertainty in Angle of Incidence. The system is the first to offer 5G wireless measurements with accuracy that can be traced to fundamental physical standards — a key feature because even tiny errors can produce misleading results. SAMURAI is also small enough to be transported to field tests.

Many instruments can measure some aspects of directional 5G device and channel performance. But most focus on collecting quick snapshots over a limited frequency range to provide a general overview of a channel, whereas SAMURAI provides a detailed portrait. In addition, many instruments are so physically large that they can distort millimeter-wave signal transmissions and reception.

Described at a conference on August 7, SAMURAI is expected to help resolve many unanswered questions surrounding 5G’s use of active antennas, such as what happens when high data rates are transmitted across multiple channels at once. The system will help improve theory, hardware and analysis techniques to provide accurate channel models and efficient networks.

“SAMURAI provides a cost-effective way to study many millimeter-wave measurement issues, so the technique will be accessible to academic labs as well as instrumentation metrology labs,” NIST electronics engineer Kate Remley said. “Because of its traceability to standards, users can have confidence in the measurements. The technique will allow better antenna design and performance verification, and support network design.”

SAMURAI measures signals across a wide frequency range, currently up to 50 GHz, extending to 75 GHz in the coming year. The system got its name because it measures received signals at many points over a grid or virtual “synthetic aperture.” This allows reconstruction of incoming energy in three dimensions — including the angles of the arriving signals — which is affected by many factors, such as how the signal’s electric field reflects off of objects in the transmission path.

SAMURAI can be applied to a variety of tasks from verifying the performance of wireless devices with active antennas to measuring reflective channels in environments where metallic objects scatter signals. NIST researchers are currently using SAMURAI to develop methods for testing industrial Internet of Things devices at millimeter-wave frequencies.

The basic components are two antennas to transmit and receive signals, instrumentation with precise timing synchronization to generate radio transmissions and analyze reception, and a six-axis robotic arm that positions the receive antenna to the grid points that form the synthetic aperture. The robot ensures accurate and repeatable antenna positions and traces out a variety of reception patterns in 3D space, such as cylindrical and hemispherical shapes. A variety of small metallic objects such as flat plates and cylinders can be placed in the test setup to represent buildings and other real-world impediments to signal transmission. To improve positional accuracy, a system of 10 cameras is also used to track the antennas and measure the locations of objects in the channel that scatter signals.

The system is typically attached to an optical table measuring 5 feet by 14 feet (1.5 meters by 4.3 meters). But the equipment is portable enough to be used in mobile field tests and moved to other laboratory settings. Wireless communications research requires a mix of lab tests — which are well controlled to help isolate specific effects and verify system performance — and field tests, which capture the range of realistic conditions.

Measurements can require hours to complete, so all aspects of the (stationary) channel are recorded for later analysis. These values include environmental factors such as temperature and humidity, location of scattering objects, and drift in accuracy of the measurement system.

The NIST team developed SAMURAI with collaborators from the Colorado School of Mines in Golden, Colorado. Researchers have verified the basic operation and are now incorporating uncertainty due to unwanted reflections from the robotic arm, position error and antenna patterns into the measurements.