Robots coated in this material could enter spaces that might be dangerous or impossible for humans. 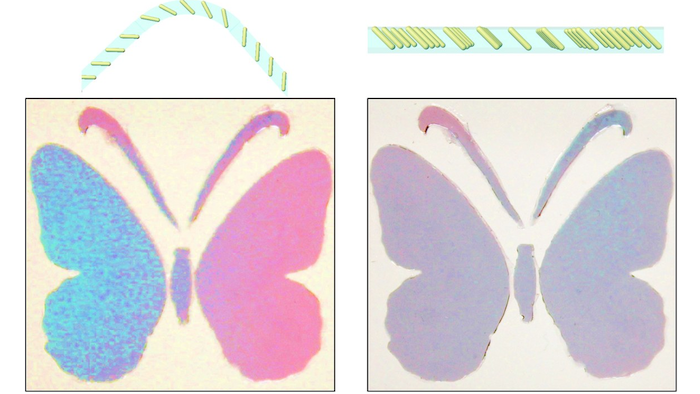 A new film made of gold nanoparticles changes color in response to any type of movement. Its unprecedented qualities could allow robots to mimic chameleons and octopi -- among other futuristic applications.

Unlike other materials that try to emulate nature's color changers, this one can respond to any type of movement, like bending or twisting. Robots coated in it could enter spaces that might be dangerous or impossible for humans, and offer information just based on the way they look.

For example, a camouflaged robot could enter tough-to-access underwater crevices. If the robot changes color, biologists could learn about the pressures facing animals that live in these environments.

Although some other color-changing materials can also respond to motion, this one can be printed and programmed to display different, complex patterns that are difficult to replicate. The UC Riverside scientists who created this nanomaterial documented their process in a Nature Communications paper published this past week.

Nanomaterials are simply materials that have been reduced to an extremely small scale -- tens of nanometers in width and length, or, about the size of a virus. When materials like silver or gold become smaller, their colors will change depending on their size, shape, and the direction they face.

"In our case, we reduced gold to nano-sized rods. We knew that if we could make the rods point in a particular direction, we could control their color," said chemistry professor Yadong Yin. "Facing one way, they might appear red. Move them 45 degrees, and they change to green."

The problem facing the research team was how to take millions of gold nanorods floating in a liquid solution and get them all to point in the same direction to display a uniform color.

Their solution was to fuse smaller magnetic nanorods onto the larger gold ones. The two different-sized rods were encapsulated in a polymer shield, so that they would remain side by side. That way, the orientation of both rods could be controlled by magnets.

"Just like if you hold a magnet over a pile of needles, they all point in the same direction. That's how we control the color," Yin said.

Once the nanorods are dried into a thin film, their orientation is fixed in place and they no longer respond to magnets. "But, if the film is flexible, you can bend and rotate it, and will still see different colors as the orientation changes," Yin said.

Other materials, like butterfly wings, are shiny and colorful at certain angles, and can also change color when viewed at other angles. However, those materials rely on precisely ordered microstructures, which are difficult and expensive to make for large areas. But this new film can be made to coat the surface of any sized object just as easily as applying spray paint on a house.

Though futuristic robots are an ultimate application of this film, it can be used in many other ways. UC Riverside chemist Zhiwei Li, the first author on this paper, explained that the film can be incorporated into checks or cash as an authentication feature. Under normal lighting, the film is gray, but when you put on sunglasses and look at it through polarized lenses, elaborate patterns can be seen. In addition, the color contrast of the film may change dramatically if you twist the film.

The applications, in fact, are only limited by the imagination. "Artists could use this technology to create fascinating paintings that are wildly different depending on the angle from which they are viewed," Li said. "It would be wonderful to see how the science in our work could be combined with the beauty of art."