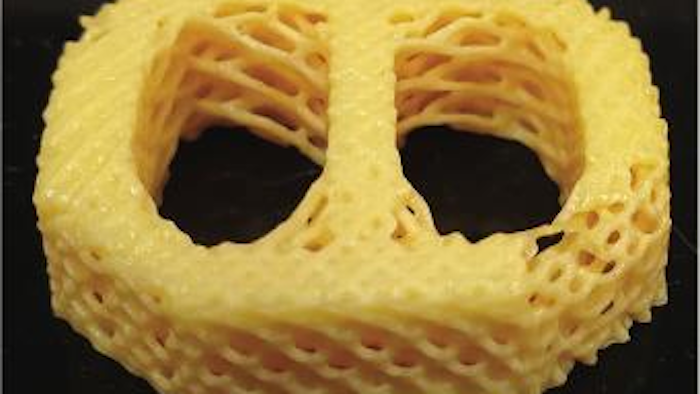 A DLP-printed LCE concept device of a spinal cage with a porous lattice architecture.
University of Colorado - Denver

Biological tissues have evolved over millennia to be perfectly optimized for their specific functions. Take cartilage as an example. It's a compliant, elastic tissue that's soft enough to cushion joints, but strong enough to resist compression and withstand the substantial load bearing of our bodies: key for running, jumping, and our daily wear and tear.

The CU Denver team, including professor Kai Yu, PhD, postdoctoral fellow Devesh Mistry, PhD, and doctoral student Nicholas Traugutt, as well as scientists from the Southern University of Science and Technology in China, reported its findings this week in the journal Advanced Materials.

Their motivation: dissipation controlled across length scales from the resin chemistry (mesoscale), to the microscale lattice architecture, and the overall macrostructure of printed structures.University of Colorado - Denver

Revolution in the manufacturing of LCEs

Yakacki, who works out of CU Denver's Smart Materials and Biomechanics (SMAB) Lab, began working with LCEs in 2012. The soft, multifunctional materials are known for their elasticity and extraordinary ability to dissipate high energy. In 2018, Yakacki received an NSF CAREER award to revolutionize the manufacturability of LCEs and several rounds of funding to develop them as a shock absorber for football helmets. Even then, he knew its applications could go further.

"Everyone's heard of liquid crystals because you stare at them in your phone display," says Yakacki. "And you've likely heard of liquid crystal polymers because that's exactly what Kevlar is. Our challenge was to get them into soft polymers, like elastomers, to use them as shock absorbers. That's when you go down the layers of complexity."

LCEs are tricky to manipulate. Until now, most researchers could create either large objects with minimal detail or high detail in practically microscopic structures. But as with phone screens, big devices with high resolutions are where the future lies. Yakacki and his team's chemicals and printing process took the difficulty down to nearly zero.

Shining a light on honey-like resin

For their study, Yakacki and his team explored a 3D printing process called digital light processing (DLP). The team developed a honey-like LC resin that, when hit with ultraviolet light, cures--forming new bonds in a succession of thin photopolymer layers. The final cured resin forms a soft, strong, and compliant elastomer. When printed in lattice structures--levels of patterning akin to a honeycomb--that's when it began to mimic cartilage.

The group printed several structures, including a tiny, detailed lotus flower and a prototype of a spinal fusion cage, creating the largest LCE device with the most detail. The combination of the resin and printing process also led to 12 times greater rate-dependence and up to 27 times greater strain-energy dissipation compared to those printed from a commercially available photocurable elastomer resin.

From football helmets to the spine

Going forward, the structures have several applications, like shock-absorbing football helmet foam or even small biomedical implants for toes. Yakacki is most excited about its possibilities in the spine.

"The spine is full of challenges and it's a hard problem to solve," said Yakacki. "People have tried making synthetic spinal tissue discs and they haven't done a good job of it. With 3D printing, and the high resolution we've gotten from it, you can match a person's anatomy exactly. One day, we may be able to grow cells to fix the spine, but for now, we can take a step forward with the next generation of materials. That's where we'd like to go."