This is the same team that made algae-based flip-flops and surfboards. 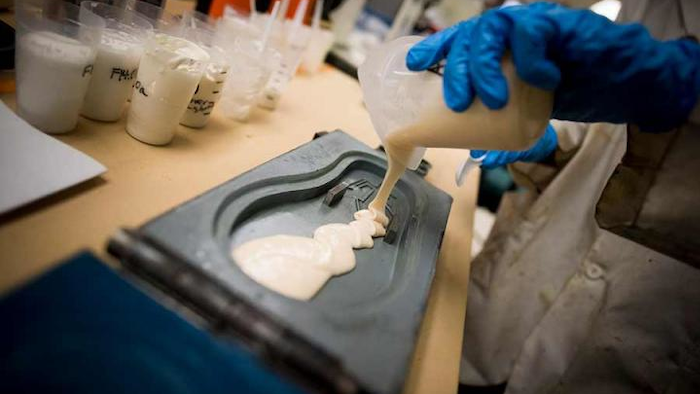 The UC San Diego researchers who developed algae-based flip-flops and surfboards are at it again. This time they are advancing their brand of renewable and biodegradable materials for use in other products like coated fabrics, patent leather and adhesives, with some foodie flare, too--flavors and fragrances.

The latest research by Michael Burkart, Stephen Mayfield and Robert Pomeroy--online in Green Chemistry, a journal of the Royal Society of Chemistry--outlines their efforts to develop methods for producing microalgae-based polyols--monomer units for polyurethane polymers--that can be used to make polyurethane foams with waste oils from algae biomass.

Many researches consider algae one of the best renewable resources for replacing fossil fuels and battling global warming without impacting food supplies. But unlike vegetable oils, the oil from algae contains small organic contaminants, like photosynthetic pigments and other cofactors that can complicate their use.

The team chose to work with oil from the green microalgae Nannochloropsis salina, a common source of omega-3 fatty acids that are sold as dietary supplements. The leftover oils, more than 70-percent, are typically either thrown away or burned, but the UC San Diego researchers found a better use for them. They developed a process to purify and convert this waste stream into azelaic acid, a building block for flexible polyurethanes. Wanting to "use the whole buffalo," they also converted the co-product heptanoic acid into a food flavoring and fragrance.

"We showed that we could take waste products from algae-based omega-3 oil production and convert those into valuable and renewable polyurethane foams. These have all kinds of commercial applications, from flip-flops and running shoe soles, to mattresses and yoga mats. In addition, we prepared a flavoring molecule from the remaining co-product that is valued at over $500 per kilogram," said Burkart referring to the team's paper, "Co-production of flexible polyurethanes and renewable solvent from a microalgae oil waste stream."

To start the work, the research team, which included scientists from Division of Physical Sciences, the Division of Biological Sciences and the California Center for Algae Biotechnology at UC San Diego, first found a scalable, cost-effective pathway to improve the purity of algae oil using simple physical methods along with saponification. This is a process by which oils react with sodium or potassium hydroxide to produce glycerol and a fatty acid salt, or soap.

In addition to the fatty acids, Mayfield explained that the team identified multiple contaminants in the waste oil. "Unlike plants, which store mainly triacyglycerides, or vegetable oil, in their seeds, microalgae contain a variety of metabolic components that are insoluble in water but freely soluble in the algae oil when extracted. The presence of these pigments inhibits downstream reaction efficiency, therefore their removal is a key process in the production of renewable chemicals from algae oil."

According to the scientists, their scalable process can be performed on oils from multiple algal species, to produce valuable monomers--molecules that take part in a chain reaction to form polymers--for a highly sustainable source of bio-based plastics. The study included an exploration of the economic value of the team's methodology. According to Pomeroy, they chose the N. salina as a strain for growing algae in large scale because of its established high production of eicosapentaenoic acid (EPA), a valuable omega-3 oil, and the ability of scientists to grow the strain for high biomass content.

"This study indicates that an algae-sourced waste stream has both the practical and economic potential to support material production of polyurethanes," said Burkart. "We are already working with major shoe companies to turn these into commercial products that people will want to buy. We are finding that consumers are concerned about all of the petroleum-based plastic waste we are generating as a society, and our team is rapidly developing solutions for future products. Stay tuned!"