The latest concept is called the 'Prophecy'. 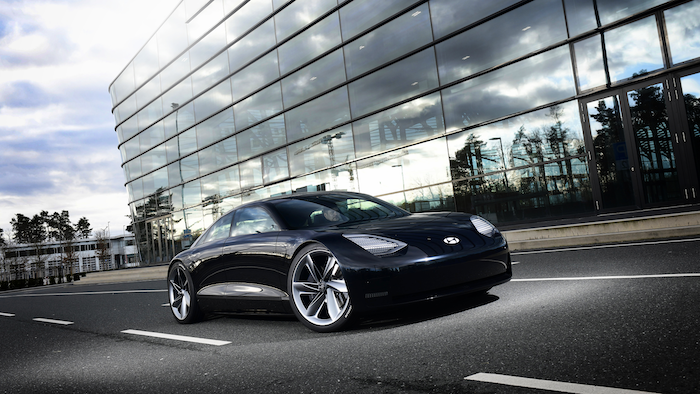 Hyundai’s most recent concept car, “Prophecy”, was revealed in March of this year.
Hyundai

Concept cars allow automakers to push the boundaries of car design by exploring new ideas or styles. Traditionally, many car manufacturers have used these studies to gauge consumer reactions to radical features, while never taking them to the production line.

In recent years, however, Hyundai has presented a number of concept cars that have informed the design of subsequent production models. 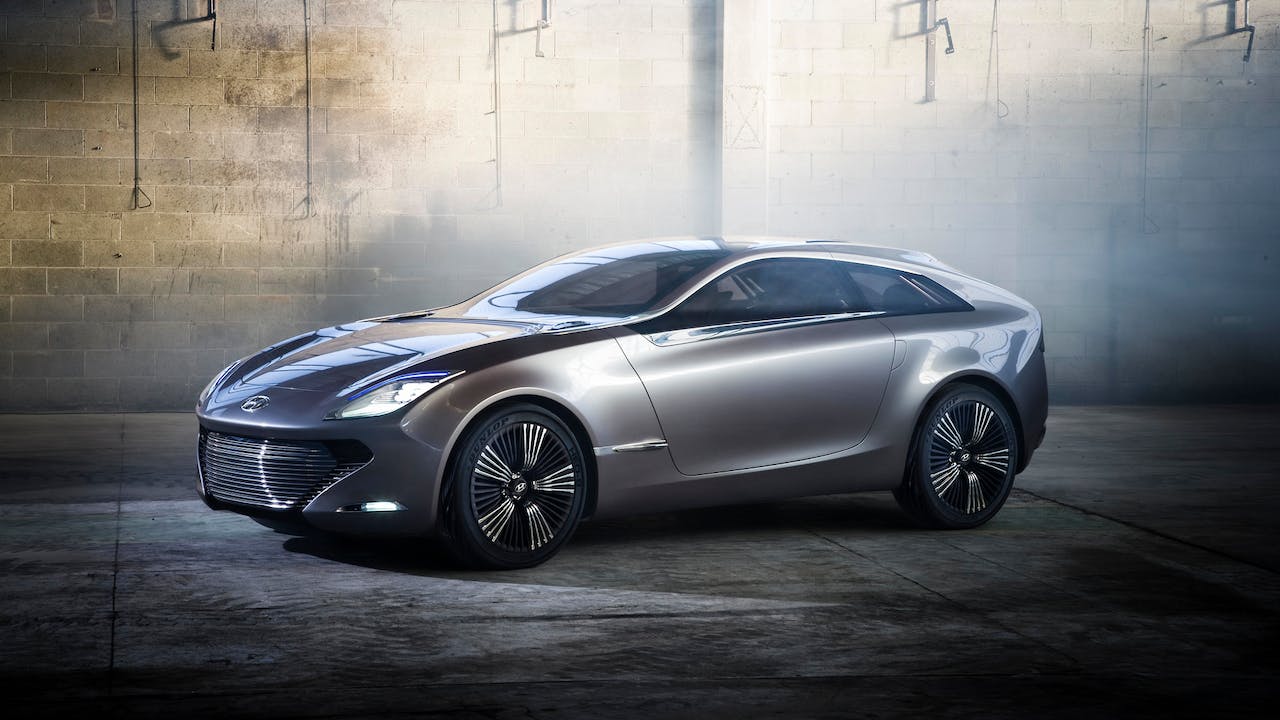 At the 2012 Geneva Motor Show, Hyundai debuted the i-oniq concept.Hyundai

At the 2012 Geneva Motor Show, Hyundai debuted the i-oniq concept, an electric sport hatchback with a range-extending petrol engine. Designed and developed at Hyundai’s European R&D Center, it was the first car to feature the company’s signature Cascading Grille.

The i-oniq concept was the forefather to the Hyundai IONIQ, which launched four years later as the world’s first car with three electrified powertrains. 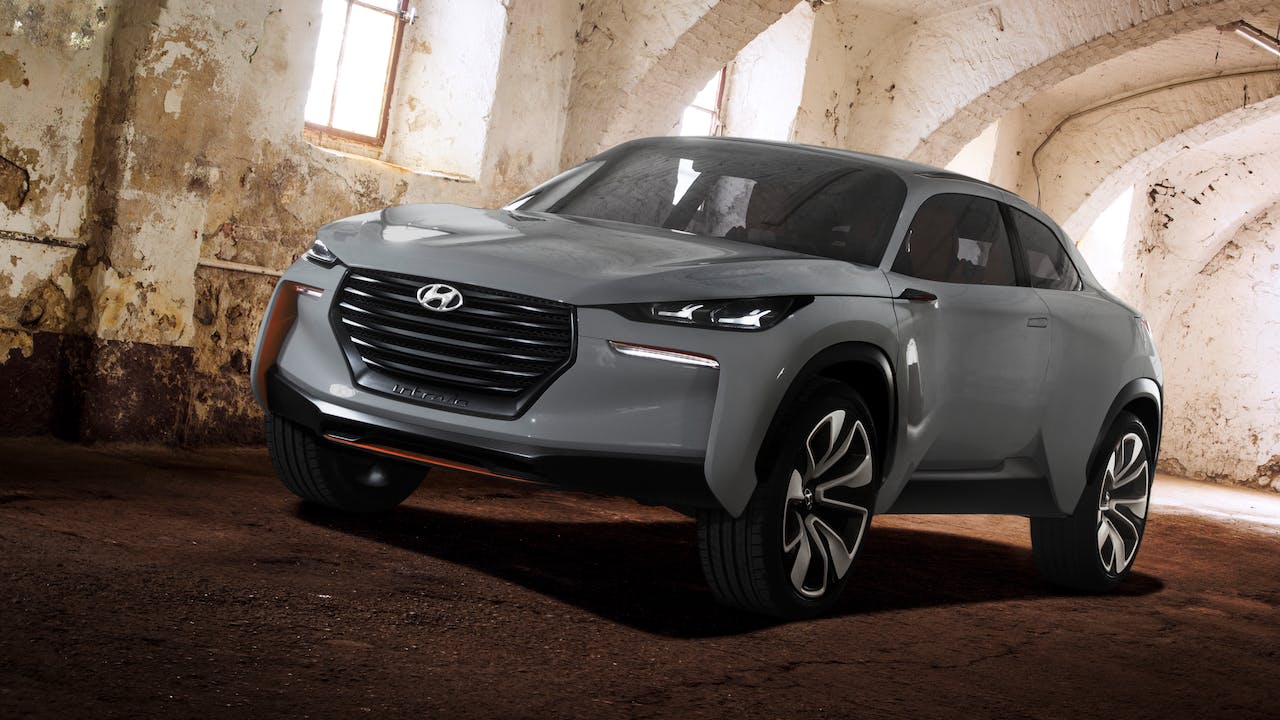 The Hyundai Intrado Concept was unveiled at the 2014 Geneva Motor Show.Hyundai.

The Hyundai Intrado Concept was unveiled at the 2014 Geneva Motor Show and signified a new direction for the brand by offering a vision of how cars will meet future mobility needs. Intrado demonstrated Hyundai’s belief that advanced vehicle technologies and intelligent design can combine to engage more effectively with the driver and passengers.

Taking its name from the underside of an aircraft’s wing, Intrado’s distinctive shape features minimal detailing and offers aerodynamic efficiency.

Intrado influenced the design of the Hyundai Kona, which launched in 2017 as Hyundai’s first subcompact SUV. Kona features a bold front and rear as well as a wide stance and sleek and sharp shapes. 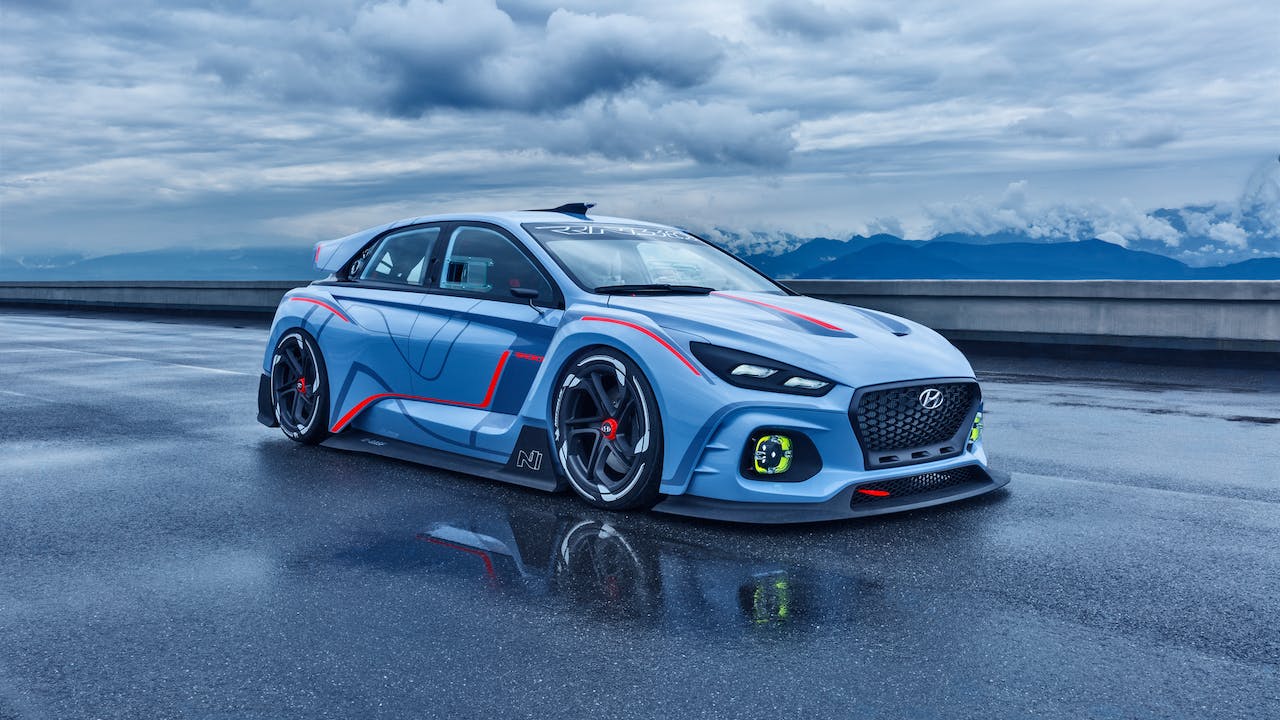 At the 2016 Paris Motor Show, Hyundai revealed the RN30, a motorsport-inspired racing concept.Hyundai

At the 2016 Paris Motor Show, Hyundai revealed the RN30, a motorsport-inspired racing concept. Based on the i30, it was developed in close collaboration with Hyundai Motorsport, Hyundai Motor Europe Technical Center and Hyundai Motor’s Performance Development and High Performance Vehicle Division. The RN30 was praised for combining an aerodynamic design alongside specialized high-performance technologies, as well as the promise of thrilling high-speed driving.

The RN30’s exterior design features a ‘floating’ fender over each wheel which, in combination with the side splitters, enhance aerodynamic performance, producing the sensation that the car is being ‘sucked’ on to the track.

The RN30 served as a forerunner to design elements inherited in both the i30 N and the i30 N TCR. These included the triangular lighting and headlight outline and Performance Blue exterior colour, as well as the use of a roll cage instead of a bench, and the N-mode button. The RN30’s lightweight philosophy was carried over to the i30 N TCR. 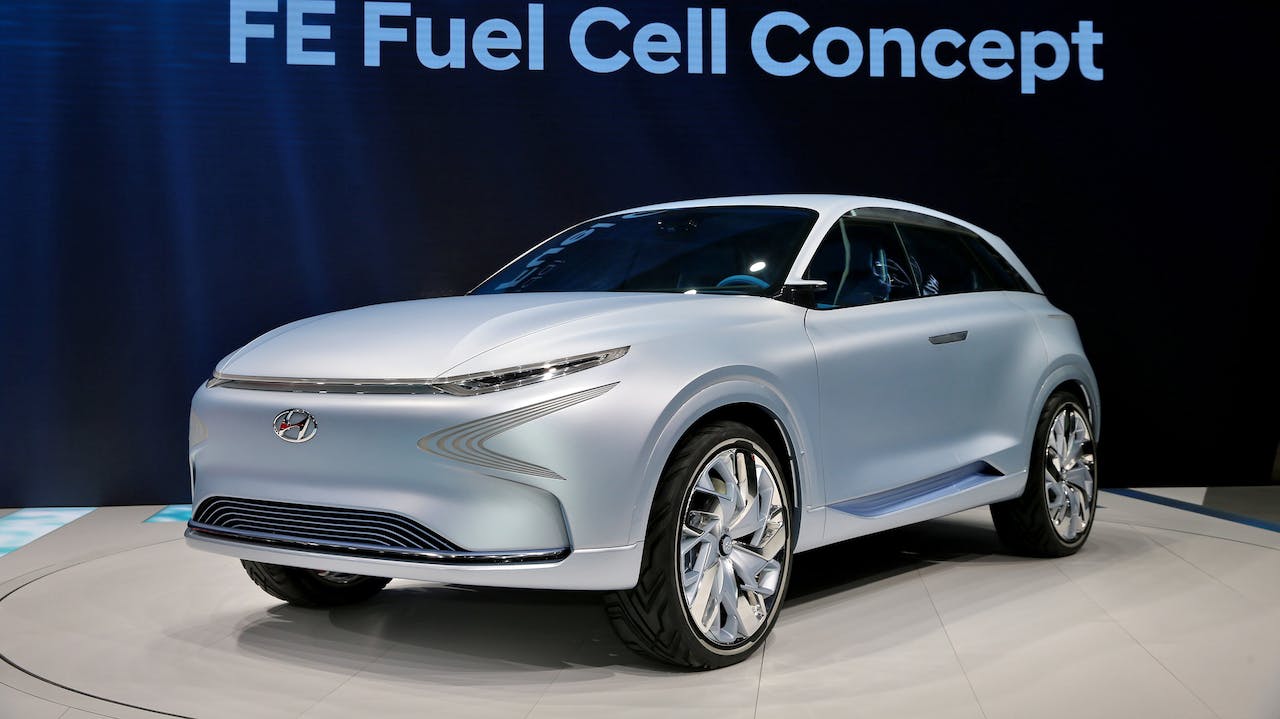 The futuristic FE Fuel Cell Concept was a step forward for hydrogen-powered vehicles when it debuted at the 2017 Geneva Motor Show.Hyundai

The futuristic FE Fuel Cell Concept was a step forward for hydrogen-powered vehicles when it debuted at the 2017 Geneva Motor Show. With it, Hyundai reaffirmed its commitment to fuel cell vehicle development.

Featuring a flowing form inspired by nature, the FE Fuel Cell Concept’s only emission is water. Its minimalist, clean and calm design emphasizes its non-polluting nature. Its minimalist style is exemplified by the dramatic and stylish rear air foil and integrated vents, which provide aerodynamic efficiency through intelligent engineering.

Hyundai’s second-generation fuel cell vehicle, NEXO was unveiled a few months after the FE Fuel Cell Concept, and inherited the model’s SUV stance and striking design features. NEXO offers an organic and flowing form, while its thin, floating roof is emphasized by a large daylight opening and slim D-pillar that runs into the rear spoiler. 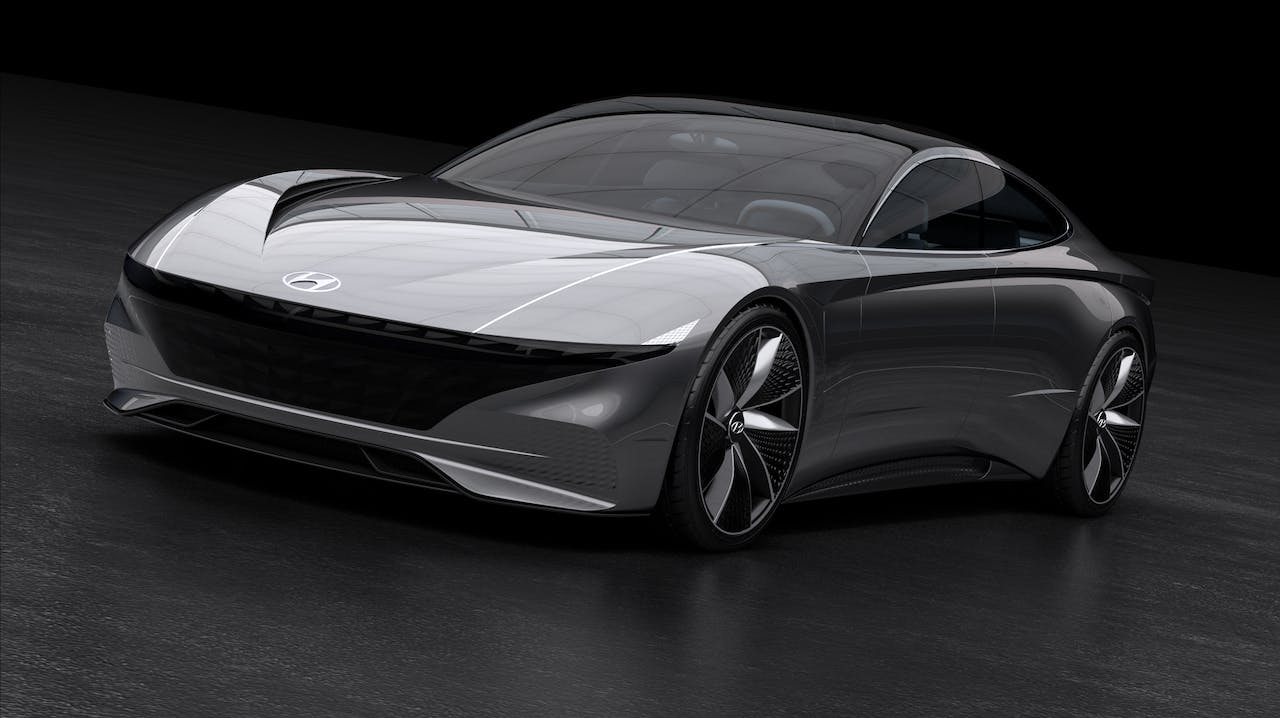 At the 2018 Paris Motor Show, Hyundai presented the “Le Fil Rouge” concept car. “Le Fil Rouge” reflects Hyundai’s belief that the brand’s past, present and future designs are all connected, and was influenced by the company’s Hyundai Pony Coupe Concept from 1974.

“Le Fil Rouge” represented a new beginning for Hyundai’s design and provided a glimpse of its future Sensuous Sportiness design identity. “Sensuous” stands for enhanced emotional values that customers can experience through design, and “Sportiness” is about the implementation of those values through innovative mobility solutions.

Design cues from “Le Fil Rouge” have been carried over to the eighth-generation Sonata and the seventh-generation Elantra. 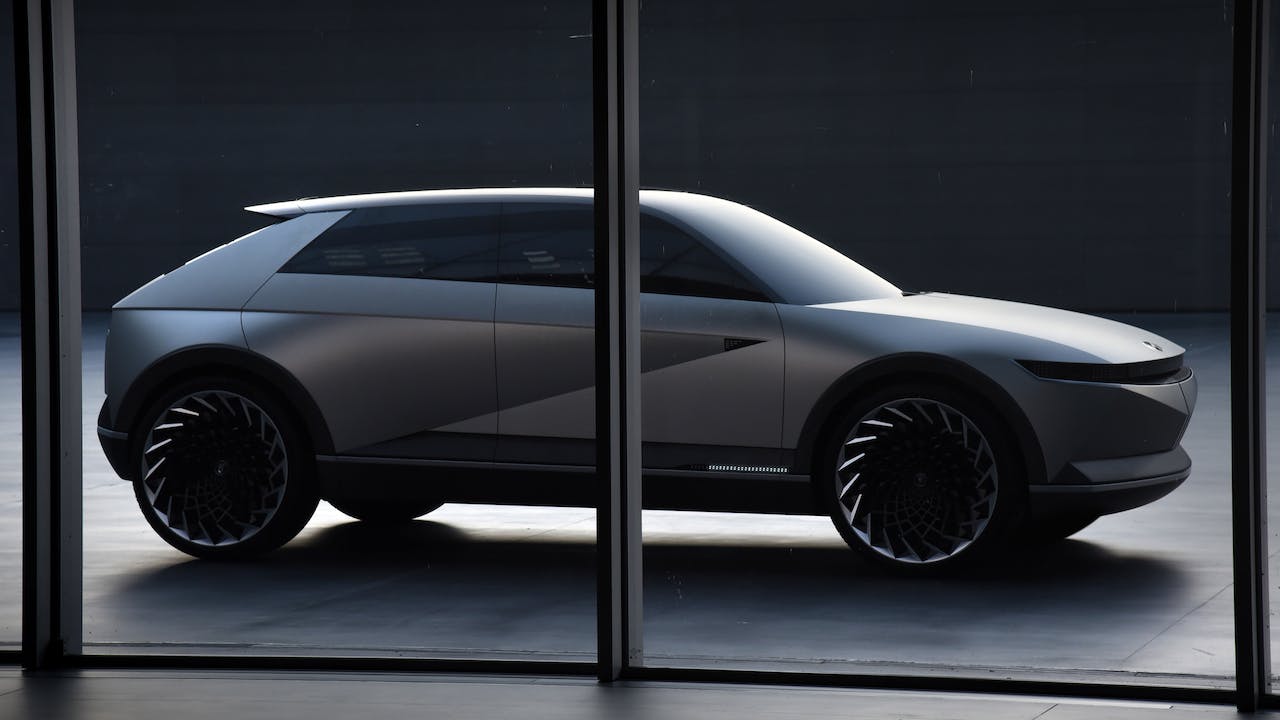 Hyundai unveiled the “45” EV concept at the Frankfurt International Motor Show (IAA) in 2019. “45” represented a homage to the brand’s heritage reimagined for the future, foreshadowing a new era of Hyundai’s automotive design focused on electrification, autonomous technologies and intelligent design. “45” is a modern interpretation of the iconic Hyundai Pony Concept, which was presented 45 years previously in 1974.

The iconic character of “45” is defined by its monocoque-style body and its aerodynamic, lightweight design inspired by aircrafts from the 1920s. The car’s name also owes itself in part to the 45-degree angles at the front and rear, forming a diamond-shaped silhouette that further foreshadows the design direction of future EV models.

Through its design, “45” strips away complexity, celebrating the clean lines and minimalistic structure of the original coupe concept. Like “Le Fil Rouge” before it, “45” represents an evolution of Hyundai’s Sensuous Sportiness design identity. 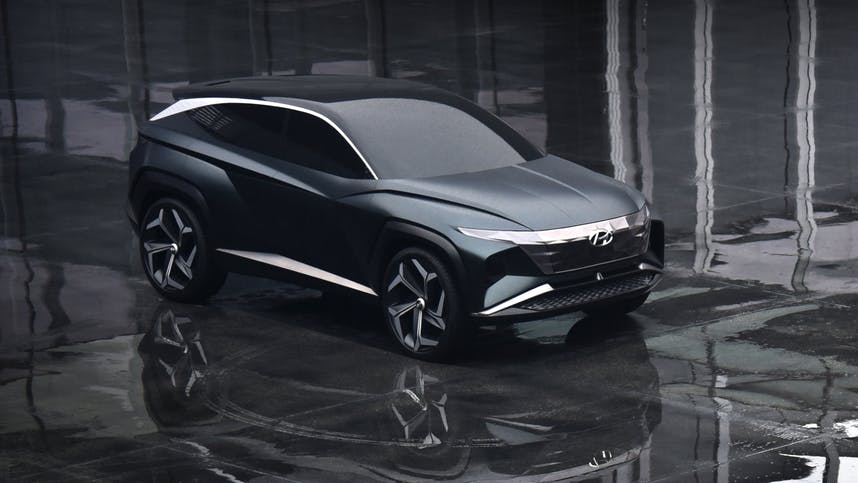 Guided by Sensuous Sportiness, the Vision T’s side profile conveys a continual sense of speed and forward motion. The long hood and level roofline coupled with a long wheelbase and short overhangs reflect its dynamic character. In contrast to prevailing compact SUV designs, Vision T uses crisp geometric angles and sharp edges to create a striking contrast between a sleek silhouette and masculine wedge lines. 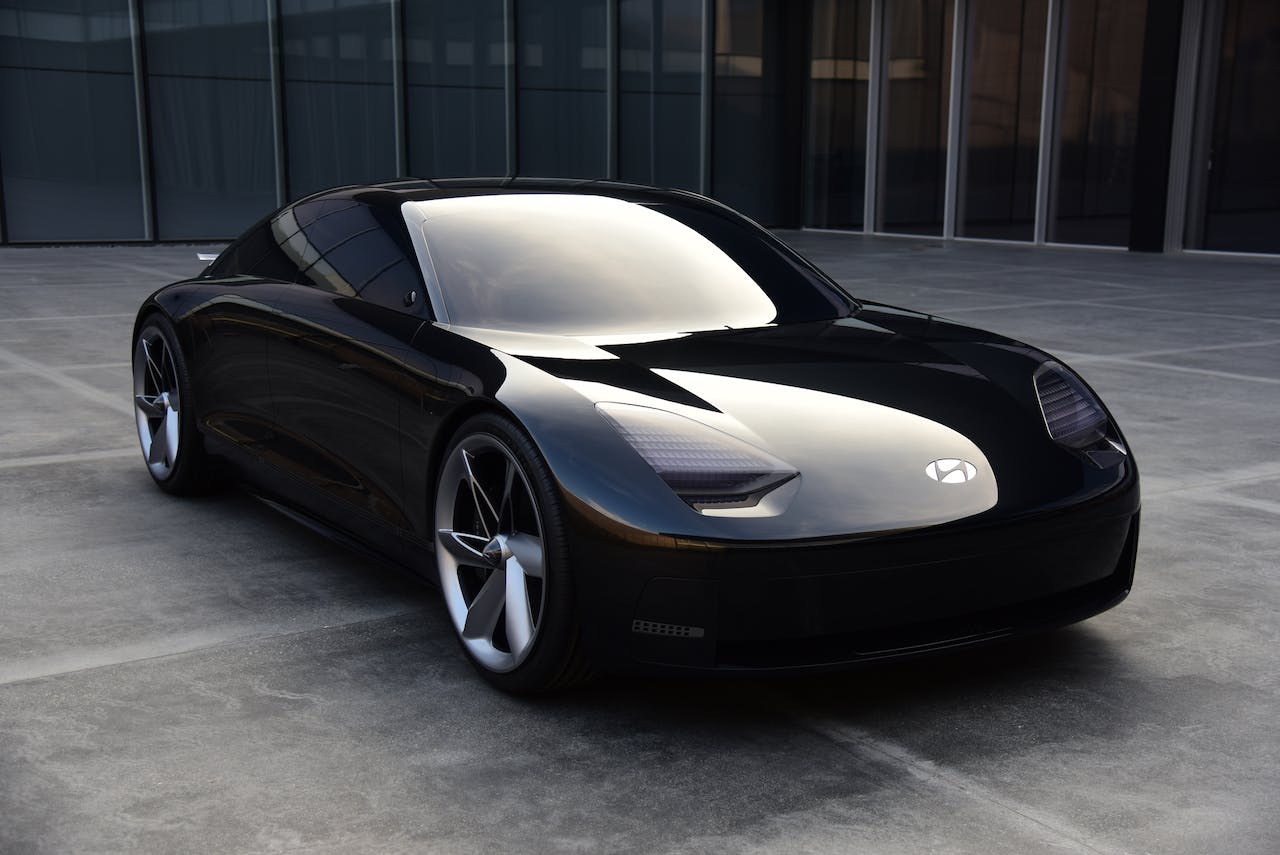 Hyundai’s most recent concept car, “Prophecy”, was revealed in March of this year.Hyundai

Hyundai’s most recent concept car, “Prophecy”, was revealed in March of this year. In sharp contrast to its predecessor 45, “Prophecy” features smooth curves and flowing lines, with virtually no sharp angles or hard edges to break the flow. Its neo-classic shape gives a nod to the luxury cars of the 1920s and 30s, while at the same time, unique features such as pixelated lighting and aerodynamic wheels make it seem like something from the future. Its name, “Prophecy”, is a clear hint that this car is a teaser of things to come.

“Prophecy” is the latest embodiment of Sensuous Sportiness. It represents the perfect marriage between aesthetic harmony and aerodynamics. The design identity can be seen in the car’s perfect silhouette, consisting of one streamlined curve sweeping from the front of the car to the rear. The smooth lines and sweeping curves give “Prophecy” the look of a perfectly-weathered stone. These elements help it achieve the Ultimate Automotive Form.

With its intuitive driver interface, zero-emissions powertrain, and unique air filtration system, “Prophecy” offers its passengers a pleasant, relaxing experience while at the same time protecting the environment. This can be summed up in the guiding design concept “Optimistic Futurism”.