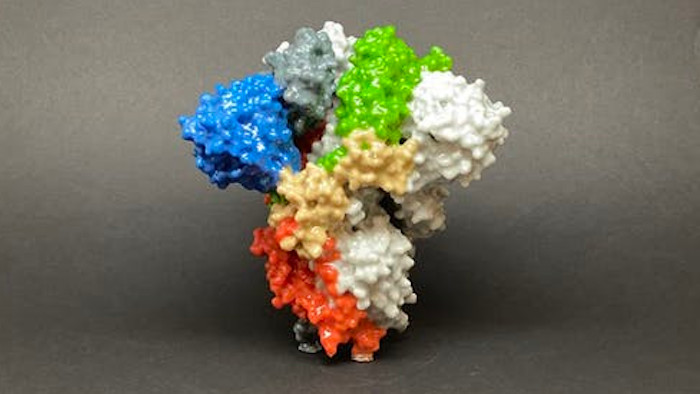 The new mRNA vaccine provides the body with the instructions to manufacture the SARS-CoV-2 spike protein. This protein gives the immune system a preview of the virus.
NIH

A century ago, on July 26, 1916, a viral disease swept through New York. Within 24 hours, new cases of polio increased by more than 68%. The outbreak killed more than 2,000 people in New York City alone. Across the United States, polio took the lives of about 6,000 people in 1916, leaving thousands more paralyzed.

Although scientists had already identified the polio virus, it took 50 more years to develop a vaccine. That vaccine eradicated polio in the U.S. in less than a decade. Vaccines are one of the most effective modern disease-fighting tools.

As of this writing, the fast-spreading COVID-19 has already infected almost half a million worldwide, and has killed over 22,000 patients. There is an urgent need for a vaccine to prevent it from infecting and killing millions more. But traditional vaccine development takes, on average, 16 years.

So how can scientists quickly develop a vaccine for SARS-CoV-2?

As immunologists, we are trying to expedite development of vaccines and antibody therapeutics. We’re currently developing novel vaccine candidates for Zika, and have successfully developed a potential protective antibody-based treatment – in 90 days – to stop that viral disease. Fast-track “sprints” like these are part of the Pandemic Protection Platform Program run by the Defense Advanced Research Agency of the U.S. Department of Defense to help us identify and deploy protective antibody treatments against viral outbreaks, such as SARS-CoV-2. Now other colleagues of ours are working on expediting a new type of vaccine for COVID-19.

A primer on vaccines

A vaccine trains the body’s immune system to recognize some signature viral protein called an antigen. SARS-CoV-2, like other coronaviruses, is named for the crown-like spikes on its surface. There are three proteins on the surface of these viruses: the envelope, membrane and spike, which encapsulate a strand of RNA. This RNA molecule holds the genetic instructions that make up the virus.

But viruses do not make their own components. Instead, a coronovirus enters into the lung and possibly other respiratory track cells by attaching through to them via its spike protein. Once inside, the viral RNA becomes part of the host cell’s protein production machinery, and produces new copies of viral proteins and RNA which then assemble into thousands of new viruses to spread the disease.

So one way to stop a disease is to block the virus from entering the cells. Vaccines do that by training the body to identify and attack the virus before it can infect healthy human cells.

A vaccine is essentially a pure preparation of one or more key components of the virus – such as the envelope, spike or a membrane protein – that is injected in the body to give the immune system a preview of the virus without causing disease. This preview tells the immune system to seek out and attack the virus containing those specific proteins if the real virus ever shows up.

However, developing vaccines based on viral proteins takes anywhere from years, such as for the human papilloma virus, to several decades, such as for rotavirus. Protein-based vaccines require mass production of viral proteins in facilities which can guarantee their purity. Growing the viruses and purifying the proteins at medically acceptable pharmaceutical scales can take years. In fact, for some of recent epidemics, such as AIDS, Zika and Ebola, to date there are no effective vaccines.

How to make a new type of vaccine quickly

To make an effective vaccine more quickly against never-before-seen, fast-spreading viruses such as SARS-CoV-2, researchers at Vanderbilt and elsewhere are using alternate approaches. In one approach, instead of proteins, a new generation of vaccines, called mRNA vaccines, will carry the molecular instructions to make the protein.

Instead of the standard vaccines where viral proteins are used to immunize, an mRNA vaccine provides a synthetic mRNA of the virus, which the host body then uses to produce the viral proteins itself.

The biggest advantage of the mRNA vaccines is that they can bypass the hassle of producing pure viral proteins, sometimes saving months or years to standardize and ramp up the mass production.

The mRNA vaccines basically mimic the natural infection of the virus, but they contain only a short synthetic version of the viral mRNA which encodes only the antigen protein. Since the mRNA used in vaccination cannot become part of the person’s chromosomes, they are safe to use. Such mRNA vaccines would also be safer than the weakened viral or protein-based vaccines because they do not carry the risk of the injected virus becoming active, or a protein contamination.

An mRNA vaccine for COVID-19 to undergo trial

Using this strategy, biotechnology firm Moderna Inc. announced on Feb. 24 that it had rapidly developed an experimental COVID-19 mRNA vaccine called mRNA-1273, ready for clinical trials in humans. This vaccine candidate is funded by the Coalition for Epidemic Preparedness Innovations, in collaboration with the National Institute of Allergy and Infectious Diseases. The mRNA-1273 encodes for a stable form of the SARS-CoV-2 spike protein.

The idea of using mRNA to ask the human body to read the instructions and manufacture the viral proteins is not new. Researchers almost two decades ago demonstrated that externally supplied mRNA is translated into the encoded protein. However, mRNA is not a very stable molecule, which prevented those mRNA vaccines from becoming a reality. The mRNA-1273 vaccine being developed today uses chemical modifications to stabilize the mRNA and packages it into an injectable form using liquid nano particles.

Besides using mRNA as a vaccine, scientists are also using mRNA as a drug that can be given intravenously. In this case the mRNA encodes an antibody protein that is known to attack the virus. So instead of giving the patient a delivery of protein antibodies, physicians could instead give them the mRNA infusion for instructions to make their own copies of disease-fighting antibody proteins.

Effective antibodies can be quickly identified by screening the survivors of a disease. But producing such antibodies for therapy often faces hurdles of poor yields, inefficient purification and incorrect protein modifications.

The effectiveness of such strategy has already been demonstrated by James Crowe’s team here at Vanderbilt. In animal studies, an antibody previously isolated from a survivor of Chikungunya, an emergent, mosquito-borne tropical viral infection that causes chronic and debilitating joint pain and arthritis was encoded as an mRNA and given to mice. The mRNA encoded antibody protected mice against infection and virus-associated arthritis, and also created protective antibodies in macaques. The mRNA based antibody is now undergoing clinical trials.

Similarly, specific antibodies against SARS-CoV-2 are being isolated from COVID-19 survivors. The genetic instructions for the most effective anti-coronavirus antibodies can be encoded as mRNA. These mRNA encoded antibodies can be used to treat patients needing urgent care.

While there are several promising new approaches, all of these are still experimental. Our best protection against COVID-19 currently remains prevention and containment of the disease. Until we have a good vaccine against SARS-CoV-2, social distancing and vigilance is our best weapon.

This article is republished from The Conversation under a Creative Commons license. Read the original article here: https://theconversation.com/coronavirus-a-new-type-of-vaccine-using-rna-could-help-defeat-covid-19-133217.