It's a major step toward bringing soft robots to human environments. 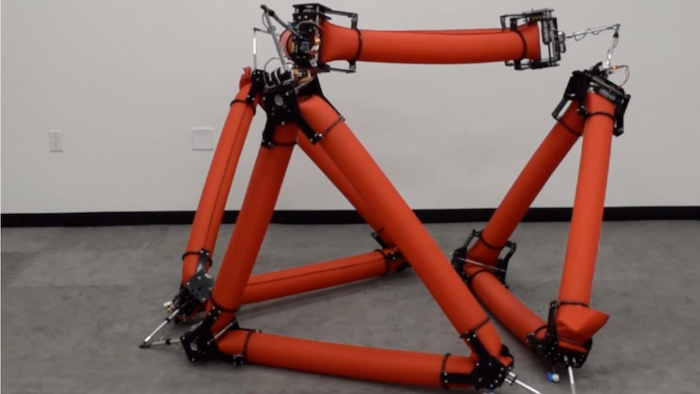 It's balloon art on steroids: a pneumatic, shape-changing soft robot capable of navigating its environment without requiring a tether to a stationary power source.

Developed by researchers in UC Santa Barbara mechanical engineering professor Elliot Hawkes' group, it's also a major step in the effort to bring soft robots to human environments, where their characteristics are uniquely suited for interaction with and around people.

"The main challenge that we're trying to address is to make a human-scale soft robot," said Hawkes, whose paper appears in the journal Science Robotics. Most soft robots to date tend to be small, and often are tethered to the wall for power or compressed air, he explained. But what if they could create a soft robot large enough and strong enough to perform human-scale interactions and independent enough to navigate diverse, unstructured environments, such as disaster zones?

Enter the isoperimetric soft robot, a roughly four-foot-tall pneumatic robot that can move by deforming its soft, air-filled fabric tubes -- while keeping its perimeter constant.

"The idea is that you can change the shape of the soft robot by using simple motors that drive along the tubes, instead of using the slow, inefficient pumps that are normally used," said Hawkes, who conducted research for this paper while at Stanford University.

The isoperimetric robot is actually a combination of concepts from three distinct robotic areas -- soft robotics, truss robots and collective robots -- that together create new capabilities. The soft fabric tubes allow the robot to traverse irregular surfaces and deform as needed, and are light while being strong. The motors also can connect to each other via three-degree-of-freedom universal joints to create truss-like structures that can support weight and allow locomotion in three dimensions. And the motor "nodes" that allow the tubes to bend are themselves small, simple collective robots that together roll along the fabric tube and pinch to form joints of varying angles.

Perhaps the most notable thing about the robot is that it doesn't require inflation and deflation to move, doing away with the need for a connection to an external, stationary source of air or an unwieldy, bulky onboard pump. The motors are powered by small batteries.

"We were looking at ways to make it untethered, and we realized that we didn't need to pump air in and out; what we really needed to do was to move the air around," Hawkes said. This was, in fact, one of the group's major design challenges.

"It turns out that when you have air, even at relatively low pressure, there are huge forces that it applies," he said, so much of the engineering actually went into creating the nodes that roll along the tube and pinch to create joints. The advantage here, Hawkes added, is that the robot's operation is quicker and more seamless than it would be if it had to inflate and deflate in the process.

The researchers envision many uses for this type of robot. In a collapsed building scenario, for instance, it could crawl flat into tight spaces and reconfigure into a three-dimensional truss to create space and support weight. For planetary exploration, it packs light and can navigate uncertain terrain. It can pick up and even manipulate loads, and its soft nature allows it to work alongside humans. Its simple, modular construction allows students and other robot-builders to create a variety of their own robots in different shapes for diverse purposes.

Taken together, the robot's size, freedom of movement, strength and utility in real-world scenarios represent the type of focus that Hawkes and his group think will be beneficial. Soft robot research is new and exciting, Hawkes said, and it's taking off.

"But as a field, we need to think critically about what contributions each research project offers, what problems it solves or how it advances the field," he said, "as opposed to just making another cool gizmo."