Why We Study Water Balloon Physics

It's critical to everything from understanding blood cells to fighting fires. 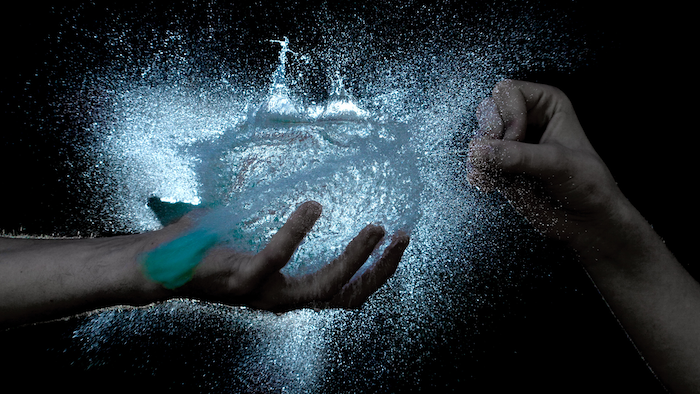 Water balloons may seem like a trivial matter. A toy for mischievous kids in summer. But for scientists, the behavior of balls of liquid wrapped in a thin elastic membrane is critical to everything from understanding blood cells to fighting fires.

Using custom-made air cannons and high-speed photography, Princeton researchers have established the definitive physical rules governing capsule impact, a research area that had gone virtually unexplored until now. The results, published March 16 in Nature Physics, reveal a surprising relationship between the behavior of capsules and water droplets. Where capsules are held together by the tension of a membrane, water droplets are held together by a force called surface tension. The researchers used that connection to adapt the well understood mathematics describing water droplets to engineering problems related to capsules.

"The most surprising thing is that the impact looks a lot like that of a drop," said Etienne Jambon-Puillet, a postdoctoral researcher and the study's first author. "Most people who study capsules resort to complex numerical simulations to model their deformation, where here we have derived a simple model, something that is easy to understand."

During his Ph.D. research at Sorbonne University, Jambon-Puillet was studying the behavior of water droplets covered with small beads. Searching for a simpler way to understand the complicated problem before him, he looked to the literature to find a model for how elastic capsules work. But he came up empty. Perplexed and intrigued, he was forced to set the capsules question aside for a few years and move on to other problems.

When he joined Pierre-Thomas Brun's Liquids and Elasticity Laboratory at Princeton, he saw the perfect opportunity to turn back to that question from his graduate school work. When a water balloon strikes a surface, what happens to the elastic shell?

"The study really makes sense in the broader context of fluid mechanics," said Brun, an assistant professor of chemical and biological engineering and the paper's senior author. "People for decades have been wracking their brains studying drop impact, and somehow Etienne found that there was this little puzzle that was completely untouched."

To control the experiment's parameters, the team custom-made elastic capsules about the size of a gumball. They then filled those to exact capacity -- without stretching them -- and smashed the balloons against a wall at around 100 miles per hour using a small air cannon. With the camera rolling at 20,000 frames per second, the researchers were able to take fine measurements of the thin shell as it made impact. They repeated the experiment with two different kinds of liquids, glycerol and honey, to see how the dynamics changed with greater viscosity. Again, the analogy to liquid drops held.

The team then turned to commercial water balloons to see what happens when an elastic shell is stretched with fluid, the way we typically think of filling balloons with water. Not so full you can't throw it, but full enough to burst on impact, soaking an unsuspecting friend. (Whether that friend remains friendly is another story). It turns out there is a critical value at which a balloon traveling at a given speed must be stretched for it to burst. Anyone who's ever thrown a dud, watching it bounce off a would-be victim and roll sadly away, knows the importance of this critical value. You either needed to fill it more or throw it harder.

Much like the rest of us, when it comes to water balloons and their ilk, engineers have been flying blind, according to Brun. Those critical values had never been formalized.

Brun and his team have given researchers a mathematical framework to understand how these objects deform with impact. And for the engineers working on these problems, the best part is that the framework is already familiar. It was just hiding in plain sight.

"The model is fairly simple," Brun said. "But that's what's beautiful about it."