The engine failure happened shortly after liftoff on a recycled rocket flying a record five times. 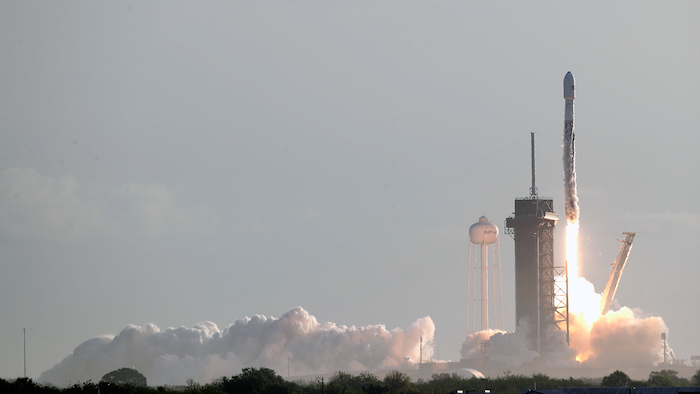 A Falcon 9 SpaceX rocket with a payload of approximately 60 satellites for SpaceX's Starlink broadband network lifts off from pad 39A at the Kennedy Space Center in Cape Canaveral, Fla., Wednesday, March 18, 2020.
AP Photo/John Raoux

SpaceX chief executive Elon Musk said one of the nine main engines shut down prematurely during liftoff, a rare occurrence. But the satellites still made it to the proper orbit, increasing the Starlink constellation to about 360.

“Shows value of having 9 engines! Thorough investigation needed before next mission,” Musk tweeted.

It's same type of rocket — a Falcon 9 — that SpaceX will use to launch NASA astronauts as early as May. Sunday's launch attempt for these latest Starlinks was halted at the last second because of a bad engine reading.

This particular first-stage booster won't be flying again. Instead of landing upright on a floating offshore platform, the booster missed and slammed into the Atlantic.

SpaceX had better luck with its recycled nose cone, recovering it from the sea.

This is the sixth batch of Starlinks that SpaceX has launched in under a year. Each compact, flat-panel satellite weighs just 575 pounds (260 kilograms).

Musk envisions thousands of Starlinks providing affordable, broadband internet service to virtually every corner of the globe — a concern for astronomers.

Astronomers fear the night will be ruined by constellations of these relatively low-orbiting satellites. SpaceX is experimenting with dark paint and, sometime soon, satellite sunshades, sort of like patio umbrellas.

A Starlink covered with dark paint rocketed into orbit in January. SpaceX officials said Wednesday there was a notable reduction in reflectivity.

The London-based OneWeb, meanwhile, plans to launch another batch of its own internet-service satellites from Kazakhstan on Saturday. This latest batch of 34 satellites will bring OneWeb's higher orbiting constellation to 74.