It could conserve energy used for defrosting airplanes and appliances. 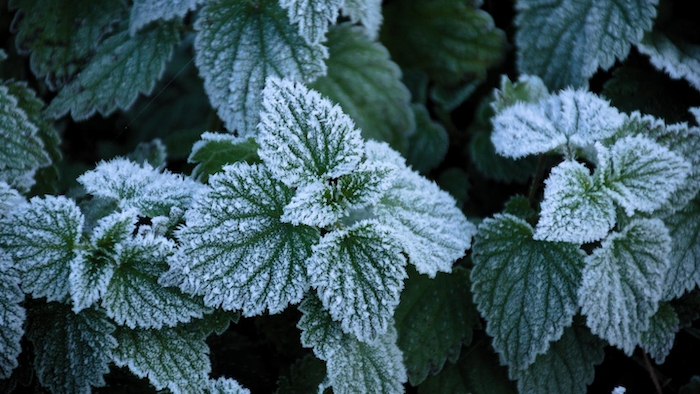 Frost forms on the convex regions of leaves, but not on the concave veins.
Stephan Herb

EVANSTON, Ill. -- Northwestern University researchers discovered a new way to significantly reduce frost formation on any surface. The finding could help decrease the amount of energy needed for de-frosting and could potentially result in fewer canceled flights, which can be grounded by even the slightest layer of frost.

By tweaking the texture of any material's surface, the team was able to experimentally reduce frost formation by up to 60%. The millimeter-scale surface structure contains an optimized, jagged series of peaks and valleys, which the researchers observed in nature. With this structure, the team also showed theoretically that frost formation could be reduced by up to 80%.

"This idea came from looking at leaves," said Northwestern's Kyoo-Chul Park, who led the study. "There is more frost formation on the convex regions of a leaf. On the concave regions (the veins), we see much less frost. We found that it's the geometry -- not the material -- that controls this."

The study is published in the Proceedings of the National Academy of Sciences. Park is an assistant professor of mechanical engineering in Northwestern's McCormick School of Engineering.

People who live in cold climates are all-too-familiar with frost. It forms when humid air vapor or condensation make contact with a surface that is below-freezing temperature.

Every winter, people scrape it off their cars or worry about it killing their plants. But frost is more than a nuisance. Frost on airplane wings can create drag, making flight dangerous or even impossible. And, when accumulating inside freezers and refrigerators, frost greatly reduces energy efficiency in appliances.

But frost doesn't form on everything. For objects, such as leaves, that have rippling geometry, frost forms on the peaks but rarely in the valleys.

"People have noticed this for several thousands of years," Park said. "Remarkably, there was no explanation for how these patterns form."

Through experimental work and computational simulations, Park and his collaborators found that condensation is enhanced on the peaks and suppressed in the valleys of wavy surfaces. The small amount of condensed water in the valleys then evaporates, resulting in a frost-free area. Even when Park used a surface material that attracts water, the water still evaporated from the valleys when below the freezing point.

Park used this new information to find the optimal surface texture to prevent frost formation. The winning surface contains millimeter tall peaks and valleys with small (40-60 degree) angles in between.

Although a thin line of frost still forms on the peaks of the surface topography, it can be defrosted with considerably less energy. It also bypasses the need for using liquids with lower frosting points or surface coatings, which can be easily scratched.

"The no-frosting region initiates the defrosting process," Park said. "So it would reduce the materials and energy used to solve frosting problems. All we have to do is provide others with the guidelines to design these serrated surfaces."