It's a warning for employers who are still holding big gatherings as the outbreak spreads. 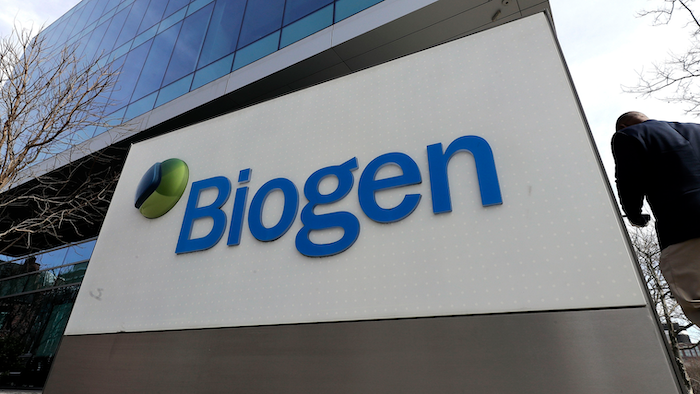 BOSTON (AP) — A biotech meeting at a hotel in downtown Boston appears to be the source of a cluster of the coronavirus in the U.S. — and a warning for employers who are still holding big gatherings as the outbreak spreads.

Seventy-seven of the 95 confirmed cases in Massachusetts have been linked to a meeting of executives with Biogen, a company based in Cambridge, next to Boston, that develops therapies for neurological diseases, state officials said.

An additional 12 people who have tested positive for the virus outside Massachusetts have been linked to the Feb. 26-27 meeting, including five in North Carolina, two in Indiana, and one each in New Jersey, Tennessee and Washington, D.C., officials said. Two tested positive in Europe, Biogen spokesman David Caouette said Wednesday.

The Biogen cluster underscores the danger in continuing to host business gatherings as the virus, which has sickened tens of thousands of people since emerging in China in December, spreads, said Marc Lipsitch, a Harvard University infectious disease epidemiologist.

“We need to stop having meetings like that,” he said, noting a smaller cluster had been linked to a business conference at the Grand Hyatt in Singapore in January. “I think a lot of companies have concluded that on their own.”

State health officials say the company notified them of the potential outbreak March 3 and that by March 6 they had publicly confirmed the cases as the type of coronavirus that causes the disease COVID-19.

The disease usually exhibits mild or moderate symptoms, such as fever and cough, but it can be worse in older adults and people with other health problems.

State and city health officials said Wednesday they are working with the U.S. Centers for Disease Control and Prevention to identify close contacts of the people with confirmed cases in order to monitor them.

But they declined to say whether any of those sickened from the conference have been hospitalized, or how many of those quarantined in Massachusetts are linked to the meeting.

Local officials also declined to say whether they were taking additional steps, such as additional sanitizing or visitor restrictions at nearby landmarks, which include a ferry wharf, the New England Aquarium, and historic Faneuil Hall and its shopping and dining complex.

Several Biogen workers are “doing well,” CEO Michel Vounatsos told employees Monday, while others are "fighting this novel virus and living in isolation from their families.”

“Knowing they are in pain, hurts each of us,” he wrote. “I am grateful for the courage our team has shown in this challenging time, working late into the night and in constant communication with public health partners.”

The company, which has about 7,500 employees globally, said Friday it has asked employees who attended the meeting to quarantine themselves. It has also directed office-based workers in Massachusetts; Research Triangle Park, North Carolina; and Baar, Switzerland, to work from home, though manufacturing activities are continuing, Caouette said.

Most people recover. People with mild illness do so in about two weeks, while those with more severe illness may take three to six weeks to recover, according to the World Health Organization, which on Wednesday declared the worldwide outbreak a pandemic.

Massachusetts Public Health Commissioner Monica Bharel said this week that officials are still testing people potentially linked to the Biogen cluster and that there could be more who show symptoms.

Several Biogen employees who tested positive attended at least one other conference downtown, but there have so far been no cases reported among those participants, Daniel Gagnier, a spokesman for Cowen, the New York-based investment bank that hosted the event, said Wednesday.

The Cowen event took place March 2-4 at the Marriott Copley Place, a hotel in a mall complex near the finish line of the Boston Marathon, which takes place in April. Officials have said they so far still intend to host the race.

A Marriott spokeswoman said Wednesday that the company is working closely with health officials.

Massachusetts has one of the nation's largest clusters of the virus after Washington state, California and New York.

In addition to the 95 cases in Massachusetts, nearly 450 people are currently in quarantine and more than 600 have completed the monitoring period symptom-free, officials said.