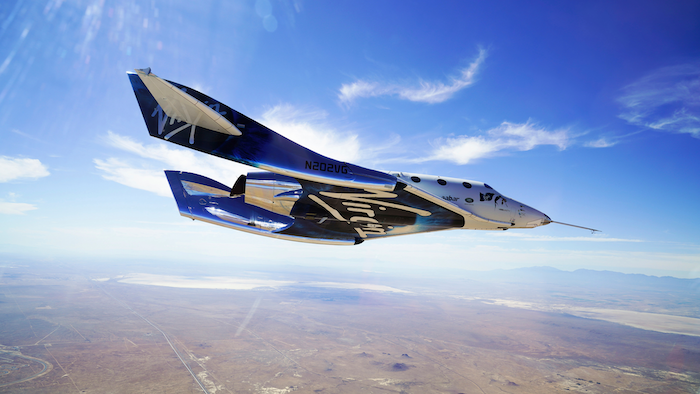 In this May 29, 2018 photo provided by Virgin Galactic, the VSS Unity craft flies during a supersonic flight test. Virgin Galactic has received nearly 8,000 online reservations of interest since its first successful test flight into space 14 months ago, the company said Tuesday, Feb. 25, 2020, as it nears commercial operation and prepares to reopen ticket sales.
Virgin Galactic via AP, File

Virgin Galactic already had more than 600 firm reservations that were taken from customers in 60 countries until the December 2018 flight, when it closed down ticket sales.

The company said that on Wednesday it will begin a process called “One Small Step” that will allow those online registrants who are serious about becoming passenger astronauts to register online for a firm reservation by paying a fully refundable deposit of $1,000.

Confirming a spaceflight reservation will be a process called ”One Giant Leap,” echoing the words of Apollo 11 astronaut Neil Armstrong when he became the first person to set foot on the moon in 1969.

The company did not say when the new set of seats would be released or the actual cost. The initial seats were sold at $250,000 apiece.

After years of development and testing at Mojave Air & Space Port in Mojave, California, Virgin Galactic has been moving toward starting actual operations at Spaceport America in southern New Mexico — although it has not set a date.

A special carrier aircraft recently ferried its spaceship, VSS Unity, from California to New Mexico and said construction of the next two spacecraft is well underway.

Virgin Galactic is offering suborbital flights to an altitude of at least 50 miles (80.5 kilometers), where passengers will see a vast swath of the Earth far below and experience a few minutes of weightlessness before the spacecraft glides to a landing.

Stephen Attenborough, the company’s commercial director, said in a statement that the increasing demand for personal spaceflight was encouraging.

“One Small Step allows us to help qualify and build confidence in our direct sales pipeline, as well as to ensure that those who are most keen to make reservations, are able to do so at the earliest opportunity,” he said.

Virgin Galactic was founded by British billionaire Richard Branson after the historic 2004 flights of the experimental SpaceShipOne, which was funded by Microsoft co-founder Paul Allen and won the $10 million Ansari X Prize as the first privately developed, manned rocket to reach space.

Virgin Galactic’s six-passenger spacecraft is a type called SpaceShipTwo. A carrier aircraft carries it to high altitude and releases it before its rocket engine ignites.

The company is now formally named Virgin Galactic Holdings Inc. and went public on the New York Stock Exchange in October. The fleet is being manufactured by The Spaceship Company, a wholly owned subsidiary.