Baseball went through a similar scandal just over 20 years ago ... in Japan. 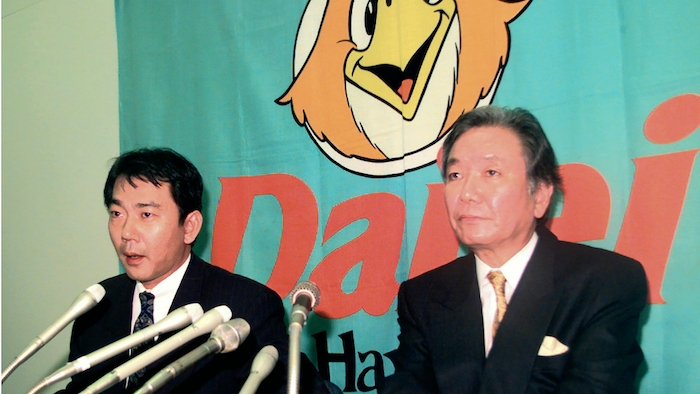 In this December 1998, photo, then Fukuoka Daiei Hawks President Hiroshi Murakami, right, and acting owner Tadashi Nakauchi speak to journalists during a press conference on a suspicion of sign stealing at Fukuoka Dome in Fukuoka, southern Japan.
Kyodo News via AP

TOKYO (AP) — If anyone thought that using technology to steal catchers' signs had only blemished Major League Baseball and the Houston Astros — or it's something new — think again.

Japan went through a similar scandal just over 20 years ago. The Japanese revere baseball as much as Americans and have straddled the same thin line between gamesmanship and cheating.

In a widely covered scandal in 1998, a camera in the Fukuoka Dome was discovered to be focused on the catcher. Officials of the Daiei Hawks — now the SoftBank Hawks — reportedly monitored the signs and relayed them by walkie-talkie to fans in the stands, who then used signals to batters to indicated the coming pitch.

There was no trash-can banging, as the Astros did. Instead, a fan would hold up a megaphone in front of their body to indicate, say, a fastball. Holding it to the right meant curve. On the left was, say, a change up.

A Japanese baseball investigation found no wrongdoing by the Hawks, who were managed then by all-time home run leader Sadahara Oh. He was not directly implicated.

A rule that came into effect at about that time made it illegal to steal signs electronically.

“The committee came up with a response that they couldn't be sure either way,” Marty Kuehnert, an American who is the only foreigner to ever be a general manager of the Japanese professional baseball, told the Associated Press in an interview. “Most believe they were cheating. There were no penalties and nothing was proven — or they said nothing was proven."

Kuehnert has worked in sports in Japan for over 40 years. He was named the Rakuten Eagles GM when the expansion team started play in 2005. He was dismissed during the first season when the team struggled similar “to the 1962 Mets" and lost 11 straight. He's now an official with the Sendai 89ers basketball team in northern Japan.

The Astros' scandal isn't receiving much attention in Japan, although it has partially exonerated Japanese pitcher Yu Darvish. Darvish started two games — including the deciding game 7 — against the Astros in the 2017 World Series. He didn't get through the second inning in either start and gave up eight earned runs.

An official at Nippon Professional Baseball — the equivalent of MLB — said electronic sign-stealing wasn't a problem in the league. The official, who declined to be identified because he was unauthorized to speak, offered little added information.

Kuehnert said he's no longer dealing with baseball daily, but suspects some skulduggery still goes on.

“If there's any fallout here it would be only with the people who are involved with, perhaps, doing the same thing and make them reconsider what they are doing, or how they are doing it, or how they will continue to do it," Kuehnert said.

He said few were probably surprised at what happened in Houston; sign-stealing is as old as baseball.

“I think what's shocking is how archaic the system was of banging on trash cans,” he said. “I mean. it's almost laughable the way they were doing it."

And just over four years ago a pitcher with the Yomiuri Giants — Japan's most popular team — was suspended for betting on games. There was no suspicion he fixed games.

In South Korea, the Korean Baseball Organization uses video replay to rule on close calls. But managers cannot use TV monitors to decide to challenge. They must use intuition, not electronic devices. Those dugouts that have TV monitors are supposed to be focused only on watching pitchers get ready in the bullpen.

In 2018, the LG Twins were fined 20 million won ($17,250) for posting a sheet of paper on a wall alongside the dugout that listed the Kia Tigers catchers' signs. KBO officials say the Twins are the only team ever disciplined for sign stealing. The Twins said the sign was meant to help base stealers, not batters.

The KBO also fined the Twins manager Ryu Joong-il and two coaches in 2018 over sign stealing.

Tomoya Satozaki, a former catcher in Japan with the Chiba Lotte Marines, said sign stealing was also common in high school baseball in Japan. The summer national high school baseball tournament, known as “koshien,” has the same wild popularity as the NCAA's March Madness and the Final Four.

Satozaki said pitchers and catchers are involved in an escalating arms race of making signals more and more complex.

“But as technology improves, it's an endless battle,” he said on his own YouTube channel. "I think the only solution is to move to a system where there are no physical signs, only audible ones between the manager, catcher and pitchers. The technology is there to allow for this like you have with the quarterbacks in the NFL, getting instructions from the bench with audio equipment in their helmets.”