Tesla is the first foreign auto brand with full ownership of its China operation. 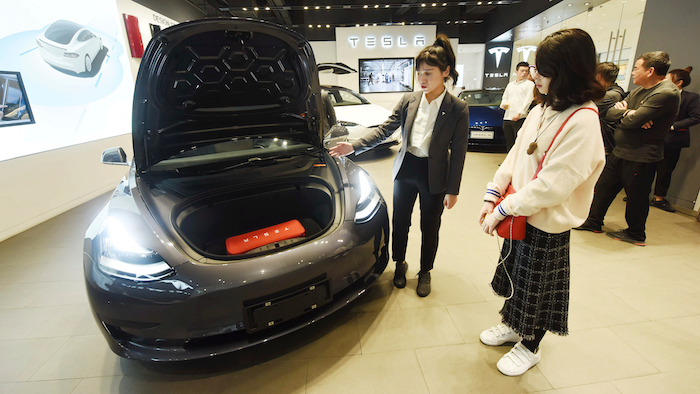 In this Nov. 24, 2019, photo, a saleswoman talks about a Tesla Model 3 car at a Tesla showroom in Hangzhou in eastern China's Zhejiang Province. Tesla's Shanghai factory delivered its first cars to customers Monday, Jan. 6, 2020, and chief executive Elon Musk said the electric automaker plans to set up a design center in China to create a model for worldwide sales.
Chinatopix via AP

Musk presided at a ceremony where a half-dozen buyers wearing red Tesla T shirts drove away new Model 3 sedans. He expressed thanks to earlier customers who he said made Tesla's expansion in China possible by purchasing imported models from the fledgling brand.

Tesla Inc. built the Gigafactory 3, its first outside the United States, following the ruling Communist Party's 2018 decision to allow full foreign ownership in electric car manufacturing. It is due to produce the Model 3 and a planned SUV, the Model Y.

China is the biggest global market for electrics, but Tesla's manufacturing launch comes at a time when sales are sagging following the end of government subsidies in mid-2019.

Musk said Tesla plans to increase investment in China and set up a design center to “create a car for worldwide sale," but he gave no details.

The company said production began in December and 15 Model 3s were delivered to Tesla employees in Shanghai on Dec. 30.

Tesla faces a crowded market flooded with dozens of electric models from rivals including GM, VW, Nissan Motor Co. and China's BYD Auto and BAIC. They are under pressure to meet government sales targets that shift the cost of promoting the technology to the industry.

Automakers that fail to meet their targets can buy credits from rivals that do. That might turn into a windfall for Tesla and other brands that earn a surplus because their whole output is electric. Beijing has yet to set the price of credits.

Other global brands work through partnerships with state-owned automakers and share their revenues. Most are expected to remain in such ventures to take advantage of their Chinese partners' government relationships despite the ruling party's plans to allow full foreign ownership in the whole auto industry by next year.

The company surprised investors by reporting a $143 million profit in the quarter ending in September, raising hopes Tesla may be turning to profitability. The company lost $1.1 billion in the first half of the year.

Tesla Gets Green Light in China