The newly forged steel instrument can pinpoint the path of stars and planets across the night sky using the naked eye. 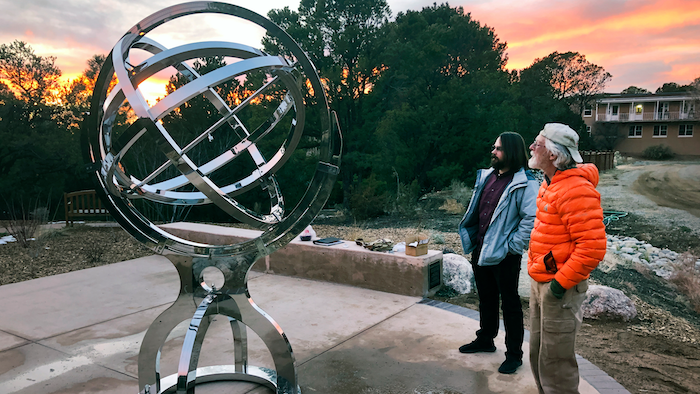 In this Dec. 11, 2019 photo Bill Donahue, right, a retired teacher and director of laboratories at St. John's College, and student Devin Ketch use an armillary sphere to track planetary rotations and explore the history of astronomy in Santa Fe, N.M. The unique precision-steel replica of an instrument created by Danish astonomer Tycho Brahe was commissioned by graduates of the college where students trace the evolution of math and science from early civilizations.
AP Photo/Morgan Lee

SANTA FE, N.M. (AP) — A newly forged steel instrument that can pinpoint the path of stars and planets across the night sky using the naked eye is a throwback to the years just before the advent of telescopes, returning stargazers in the hills of northern New Mexico to the essentials of astronomy in the past.

Installed at St. John's College by graduates, the device is a remake of long-lost originals devised by Danish astronomer Tycho Brahe in the late 16th century to chart the location of stars and the orbits of planets.

It consists of four interlocking rings — forged of precision steel and aligned with the north star and equator — combined with a sliding viewfinder that is moved by hand to measure angles between the any celestial object, the horizon and the equator.

Lengthy, painstaking measurements from such an instrument in the late-1500s allowed Johannes Kepler to show that Mars revolved in an elliptical orbit around the sun, disproving the entrenched theory of the circular movement of heavenly bodies and setting off a search of new theories of planetary motion and forces.

“You can often learn things about how science was done in another age by recreating the artifacts and recreating the instruments,” said William Donahue, a retired faculty member and laboratories director at St. John’s College, whose campus overlooks Santa Fe. “This is a lot of fun because you get to do things that nobody has done for 300 years.”

Static sculptures of Brahe's so-called armillary sphere proliferate in public parks, but few if any allow for detailed measurements like the one in Santa Fe. It is accurate to incremental angular measurements of one-sixtieth of a degree, or 1 arc minute.

The device is an obvious anachronism in an age of sky-charting smart phone apps — and a fitting addition to St. John’s College, where students trace the evolution of math and science from ancient civilizations by studying original texts or their English translations.

By contrast, the latest stargazing device in Santa Fe promises no scientific advances. Instead, it's something of a time portal into the travails of 16th century astronomy.

Donahoe, who translated Kepler’s “Astronomia Nova” from Latin, says pinpointing the coordinates of bright stars and planets produces lots of “ah-hah moments" for student. The sphere is not yet part of the college curriculum.

Measurements taken by Brahe were accurate enough to challenge fundamental astronomical conceptions and misconceptions and help pave the way for Isaac Newton's theory of gravity and the laws of motion, Donahue says.

Tracking orbits also was no easy feat in an age where mechanical clocks could be maddeningly inaccurate. Then came the telescope.

“In 1609 Galileo turned his telescope on the sky — and that changed everything,” Donahue said.