Are Paper Catalogs on the Rebound?

They are not yet headed for the recycling bin of history. 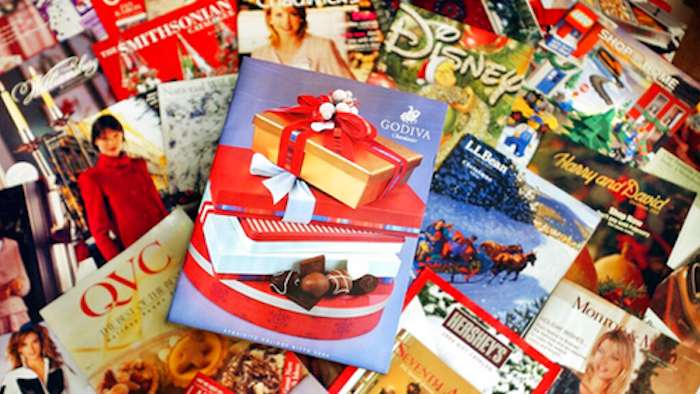 This Wednesday, Nov. 24, 2004 file photo shows a selection of holiday season catalogs in Portland, Maine. Catalogs, those glossy paper-and-ink offerings of outdoor apparel, kitchenware and fruit baskets, are not yet headed for the recycling bin of history.
AP Photo/Robert F. Bukaty, File

UPDATE: In a story about retailer catalogs, The Associated Press erroneously reported the period of time in which catalog mailings dropped. The story should have said catalog numbers dropped from about 19 billion in 2006 to an estimated 11.5 billion in 2018. The story has been updated below.

PORTLAND, Maine (AP) — Catalogs, those glossy paper-and-ink offerings of outdoor apparel, kitchenware and fruit baskets, are not yet headed for the recycling bin of history.

Until recently, the future appeared grim for the mailbox-stuffers. A one-two punch of postal rate increases and the Great Recession had sharply cut their numbers. Common wisdom had everything retail-related moving online.

But a catalog-industry rebound appears in the works, fueled in part by what might seem an unlikely group: younger shoppers who find it's sometimes easier, more satisfying and even nostalgic, flipping pages rather than clicking links.

Industry experts say that all those catalogs crammed into mailboxes this holiday season are a sign that mailings have stabilized — and may be growing — after a decline of about 40% since the Great Recession.

New companies are mailing catalogs. And even died-in-the-wool online retailers like Amazon and Bonobos are getting into the act.

“They’re tapping out on what they’re able to do digitally," said Tim Curtis, president of CohereOne, a direct marketing agency in California. "They’ve got to find some new way to drive traffic to their websites.”

Catalog retailers slashed mailings, and some abandoned catalogs altogether, after a major U.S. Postal Service rate increase and the start of the recession in late 2007. Catalog numbers dropped from about 19 billion in 2006 to an estimated 11.5 billion in 2018, according to the American Catalog Mailers Association.

The industry still faces challenges, but there’s reason for some optimism, said Hamilton Davison, president of the mailers association.

Millennials who are nostalgic for vinyl records and all things vintage are thumbing through catalogs and dog-earing the pages. It's a new demographic roughly from 22 to 38 that’s helping to breathe some new life into the sector, industry officials say.

In fact, millennials are more likely than baby boomers to visit a store based on mailings, according to the U.S. Postal Service inspector general.

Sarah Johnson says she loves flipping through catalogs at her convenience — but gets her hackles up when retailers fill her email inbox.

“Promotion emails drive me crazy,” said Johnson, 29, of Vernal, Utah. “When there’s a catalog lying on the table, it feels like it’s my choice to pick it up and flip through it. When it arrives in my inbox it feels like it’s imposing on me,” she said.

Angela Hamann, another millennial, says she prefers catalogs because it’s easier than scrolling through webpages to evaluate a retailer’s offering.

“It’s a great way to assess what a company has to offer without making a bunch of clicks,” said Hamann, 37, of New Gloucester, Maine.

During the downturn, catalog retailers reduced the size of the catalogs, slashed the number of pages and became selective about their mailings, said Jim Gibbs from The Dingley Press, in Lisbon, Maine, which prints and mails about 330 million catalogs a year.

But catalogs never died off, as some began predicting during the dot-com bubble. Catalog naysayers didn’t understand that a webpage is useless unless shoppers know about it, and catalogs are an important tool for driving customers online, Gibbs said.

These days, retailers like Amazon, Wayfair and Walmart are boosting their mailings, helping to offset companies that abandoned catalogs, and dozens of smaller companies are also getting into the act, Davison said. There’s also a trend toward postcard fliers being mailed by companies like Shutterfly, Curtis added.

For some, there’s no escaping the sentimental aspect.

In Austin, Texas, tech company worker Mike Trimborn described himself as a “nearly 100% online shopper” who sees catalogs as an “exercise in futility.” But he waxed nostalgic when he received a toy catalog from Amazon in the mail this holiday season.

“It was such a fun experience when I was a kid. To be able to give that to my kids was a surprise,” he said.