The complaint alleges the companies were aware that children may have helped mine the cobalt used in their lithium-ion batteries. 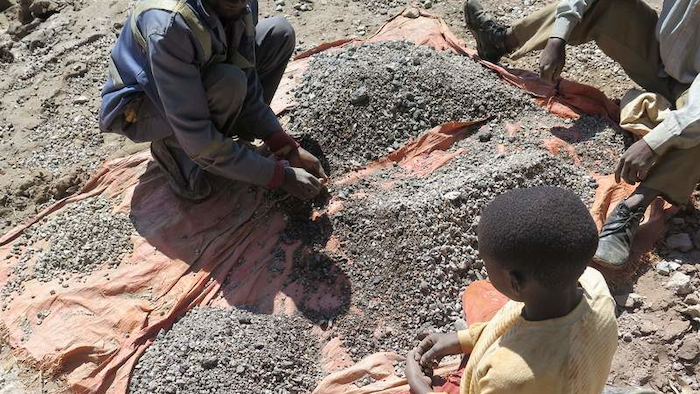 François and his 13-year-old son, Charles, sort stones before taking them to a nearby trading house that buys the ore, Democratic Republic of Congo, 2016.
Amnesty International

A lawsuit filed by an advocacy group over the use of child labor in African mines reportedly names several of the world’s leading tech companies.

The BBC reports that the International Rights Advocates filed the lawsuit in a U.S. District Court on behalf of 14 families from the Democratic Republic of Congo. The families say their children worked in Congolese cobalt mines owned by China’s Zhejiang Huayou Cobalt and Switzerland’s Glencore.

The complaint also alleges that tech giants Apple, Google, Microsoft and Dell, along with electric vehicle maker Tesla, had “specific knowledge” that cobalt in their products’ lithium-ion batteries could be linked to child labor yet failed to police their supply chains.

The DRC’s cobalt mining industry, which supplies 60% of the vital metal worldwide, has long faced questions about labor violations, environmental concerns and corruption, the network noted. A 2016 report from Amnesty International and Afrewatch traced Congolese cobalt mined with child labor to major tech companies and automakers.

“This is the beginning of the end of impunity for those who have been economically benefiting from child labor in the DRC’s mining industry,” Dr. Roger-Claude Liwanga, a member of the group’s research team, said in a statement.

Apple responded in a statement to CNet that it publicly identifies its cobalt suppliers and removes those that do not meet its standards, which include “participating in independent third-party audits.”

Dell told the publication it is committed to responsible sourcing practices and investigates reported misconduct, while Microsoft issued a similar statement to The Telegraph.

Glencore told the U.K. publication that it "does not tolerate any form of child, forced, or compulsory labour."

Tesla Gets Green Light in China

May 3rd, 2018
Latest in Product Development