The mice are for a muscle study, the robot is sensitive to astronauts' emotions and the beer is part of a miniature malt house. 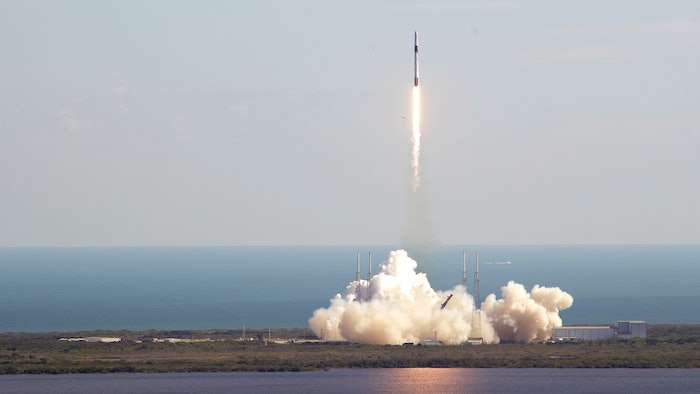 CAPE CANAVERAL, Fla. (AP) — SpaceX launched a 3-ton shipment to the International Space Station on Thursday, including “mighty mice” for a muscle study, a robot sensitive to astronauts' emotions and a miniature version of a brewery's malt house.

The Dragon capsule also is delivering holiday goodies for the six station residents. NASA's Kenny Todd isn't giving any hints, but said, “Santa's sleigh, I think, is certified for the vacuum of space.”

The recycled capsule should arrive Sunday.

The Falcon rocket blasted off from Cape Canaveral a day late because of high winds. SpaceX recovered the new booster on a barge just off the coast in the Atlantic several minutes following liftoff so it could be reused. SpaceX employees in Southern California cheered when the booster landed, and again a few minutes later when the capsule reached orbit.

This is SpaceX's 19th supply run for NASA.

Forty mice are aboard, including eight "mighty mice" with twice the muscle mass of ordinary mice, according to the experiment's chief scientist, Dr. Se-Jin Lee of the Jackson Laboratory in Farmington, Connecticut.

Researchers plan to bulk up some of the non-mighty space mice during or after their month-long flight in an attempt to build up muscle and bone. This therapy could one day help astronauts stay fit on lengthy space trips, said Lee and Dr. Emily Germain-Lee of Connecticut Children's Medical Center.

Before and after liftoff, the couple sang part of the theme song to the mid-20th century superhero TV cartoon “Mighty Mouse"' and even had others joining in at the launch site.

Germain-Lee was too emotional to sing right at liftoff. “I was sobbing so hard that I couldn't even get my breath," she told The Associated Press.

In addition, there are barley grains aboard the Dragon for a beer-malting experiment by Anheuser-Busch. It's the third in a series of Budweiser experiments to look at how barley germination is affected by weightlessness.

The shipment also includes a large, plastic 3-D printed robot head with artificial intelligence, according to its German creators. It's named Cimon, pronounced Simon, the same as the prototype that flew up last year. This upgraded version is designed to show empathy to its human colleagues in orbit.

Cimon will spend up to three years at the space station, three times longer than its recently returned predecessor. The goal, said IBM's Matthias Biniok, is to provide astronauts with constantly updated robotic helpers, especially at the moon and Mars.

The space station currently is home to three Americans, two Russians and one Italian.

Russia plans to launch its own cargo ship to the outpost Friday.