Exec: Huawei Wants to be 'Transparent'

"The first thing we need to do is we need to demystify this company," said Paul Scanlan, CTO of Huawei's carrier business group. 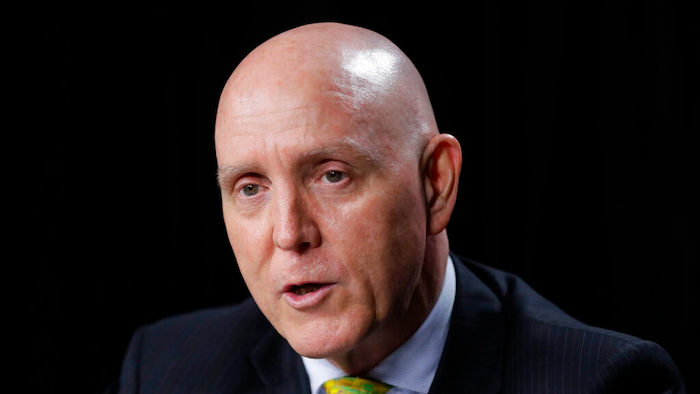 Huawei Chief Technology Officer Paul Scanlan, during an interview with the Associated Press in Washington, Friday, Oct. 18, 2019. Scanlan says the company wants to be open and transparent in persuading the U.S. government that national security concerns about its technology are unfounded.
AP Photo/Pablo Martinez Monsivais

WASHINGTON (AP) — A top executive of Chinese tech giant Huawei said Friday that the company is prepared to be "open and transparent" as it looks to persuade the U.S. government that it can be trusted and that national security concerns about its technology are unfounded.

"The first thing we need to do is we need to demystify this company," Paul Scanlan, chief technology officer of Huawei's carrier business group, said in an interview with The Associated Press.

"We are a Chinese company, we are based in China, the majority of the people are ethnically Chinese, so there's nothing to say we're not a Chinese company," he said. But, he added, "That doesn't mean we have ties to the Chinese government. It doesn't mean we take money from the Chinese government in the form of investments. Those things are not true."

Scanlan spoke as grievances between China and the U.S. remain unresolved despite the recent announcement of a temporary truce in the countries' trade war. U.S. sanctions tied to national security concerns threaten to disrupt the company's smartphone and network equipment business, with Washington pressuring allies to ban Huawei, the world's biggest supplier of telecom gear, from new 5G networks.

Huawei, seeking to reduce reliance on U.S. and other foreign suppliers, has developed its own line of chips to power some of its phones. The company has also been removing U.S. components from its smartphones and network gear and has created its own phone operating system to replace Google's Android if necessary.

Though the company wants to participate in the "global supply chain" and would prefer to continue collaborating with Google, it is also prepared to continue developing its own products that could compete more directly with other companies.

"If push comes to shove and you're put in a corner, we're a commercial company — and therefore commercial companies will take commercial decisions," Scanlan said, later adding, "It's a welcome, perhaps, change to the world to have some alternative competition."

He said Huawei is eager to "demystify" itself to skeptical U.S. authorities and is prepared to invite American officials to review its software themselves to address any concerns. The company has done the same for the United Kingdom, where new software is inspected at a facility and reports are prepared for the government and telecommunications operators, he said.

"If this is what is required, give us examples of what you think would be the rule book, and we'll play by the rule book," he added, referring to the U.S. "But today the challenge is, what's the rule book?"

He added: "You fear what you don't know. The first thing Huawei needs to do and what we're trying to do this year, very specifically, is be more open and more transparent — ask any question you'd like, every executive will answer it honestly and openly. If you'd like to come to our facilities to have a look at what we do and how Huawei does, you're more than welcome. Anybody."

The Trump administration has accused Huawei of being a security risk, imposing curbs in May on the company's access to U.S. technology and components, including Google's music, maps and other smartphone services. Washington has delayed enforcement and suggested it might allow sales of some U.S. technology.

In a statement Friday, Commerce Secretary Wilbur Ross noted that the department had concluded in May that "Huawei was engaged in activities that are a threat to U.S. national security and our foreign policy interests.

"Through placing Huawei and over 100 of its non-U.S. affiliates on the Department's Entity List, Commerce has prevented American technology from being used by international 'bad actors' against us or our allies across the world," Ross said. "Moreover, through our actions, we have made clear that lying, cheating, and stealing are not suitable corporate growth strategies."

The Justice Department has also charged the company with fraud and conspiring to steal trade secrets, among other accusations.

Huawei has denied accusations that it facilitates Chinese spying or installs "backdoors" in its equipment for eavesdropping. Scanlan called those concerns "scaremongering."

Huawei founder Ren Zhengfei has said the company is willing to license 5G technology to American developers as a way to increase the company's presence in 5G and generate license fees and demand for its products. So far, though, Scanlan said he hasn't heard of anyone taking the company up on that suggestion.

"We've not had any serious discussions with anybody. It's a preliminary idea that Mr. Ren has and has put out in the market," Scanlan said.

The interview took place two days after Huawei Technologies Co. Ltd. reported a double-digit gain in sales . Scanlan suggested the scrutiny over the last year may have had an unintended benefit of giving Huawei extra name recognition, with people previously unfamiliar with the company checking it out and saying, "That's not a bad product."