Tough Times for Chipmakers as Samsung Warns of Profit Drop

Chipmakers are suffering the consequences from misreading industry demand for their products. 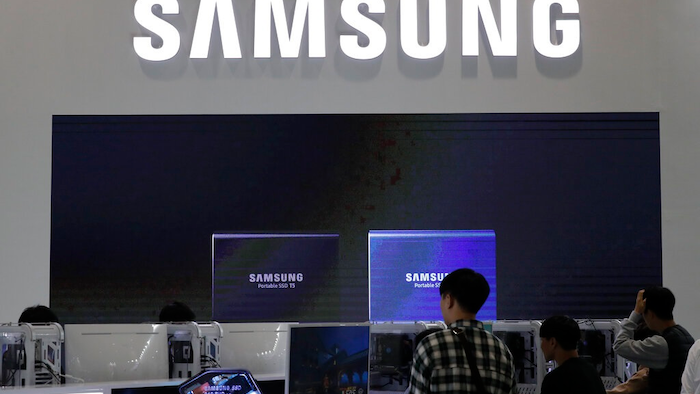 Visitors tour near the logo of Samsung Electronics at semiconductor exhibition in Seoul, South Korea, Tuesday, Oct. 8, 2019. Samsung Electronics has predicted its operating profit for the last quarter will fall by more than 56% from a year earlier amid sluggish global demand for computer chips.
AP Photo/Lee Jin-man

SEOUL, South Korea (AP) — Samsung provided the latest sign of the tough times afflicting computer chipmakers as it braced investors for a sharp drop in profit.

The sobering forecast Tuesday wasn't entirely unexpected, given an industrywide glut that has forced chipmakers to slash prices to clear out inventory.

Although Samsung also makes smartphones and an array of other devices, it also is among the world's largest chip suppliers.

Chipmakers are suffering the consequences from misreading industry demand for their products. The industry invested heavily in 2016 and 2017 to ramp up production in anticipation of being flooded with orders for chips used in smartphones, internet-connected cars and other products.

Instead, smartphone sales have been dwindling as a lack of innovation and rising prices have caused consumers to hold on to their existing devices for longer periods. Automakers also haven't been ordering as many chips as anticipated, and expected breakthroughs in artificial intelligence, robotics and virtual reality haven't materialized as quickly as envisioned, IHS Markit analyst Les Jelinek said.

Supply and demand "just went in completely opposite directions, and the bottom kind of fell out," Jelinek said. "When you look at 2019, there wasn't a bright spot for the industry."

Worldwide chip revenue is projected to decrease 13% this year to $423 billion, down from $485 billion last year, according to IHS Markit.

President Donald Trump's ongoing trade war with China also has caused market upheaval, but the fallout mostly has affected U.S. chipmakers that usually sell a lot of processors to Chinese companies, particularly Huawei — a major target of the administration's sanctions.

The adverse market conditions are the main reason Samsung expects its operating profit for the July-September quarter to fall 56% from the same time last year to $7.7 trillion won ($6.4 billion). The South Korean company says its third-quarter revenue likely rose 5% from last year to 62 trillion won ($52 billion).

Analysts say Samsung's sales during the third quarter should have been boosted by the launch of its Galaxy Note 10 smartphone and an improvement in display shipments driven by the release of new devices by Apple.

Samsung did not provide a detailed account of its performance by division. It will provide that breakdown when it releases its full third-quarter report later this month.

Conditions are expected to improve next year as the shift to the next generation of ultrafast wireless connections, known as 5G, rekindles demand for chips in networking equipment, compatible smartphones and other devices.

Trump Meets with Chipmakers on Huawei