The chipmaker was accused of abusing its dominance in 3G baseband chipsets by selling them below cost to force a startup out of the market. 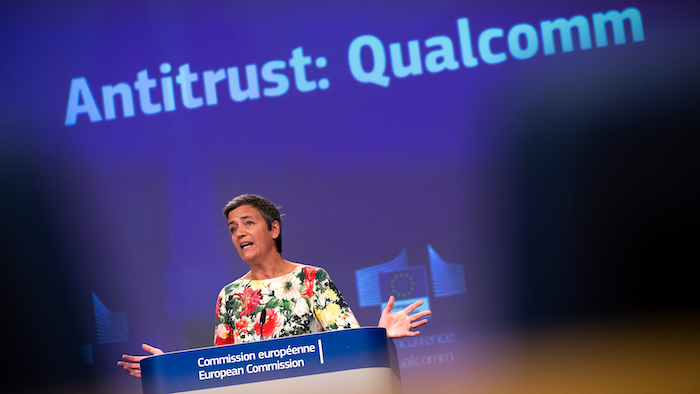 BRUSSELS (AP) — In yet another European Union move against a U.S. tech giant, the bloc's antitrust chief on Thursday fined chipmaker Qualcomm $271 million, accusing it of "predatory pricing" to drive a competitor out of the market. EU Antitrust Commissioner Margrethe Vestager said Qualcomm was abusing its market dominance in 3G baseband chipsets. She said it sold them below the cost of production to force startup Icera out of the market almost a decade ago.

Icera was based in Britain and was seen as a rival that could eventually threaten Qualcomm's dominance. Vestager said the market was too important to tolerate such abuse.

"Baseband chipsets are key components so mobile devices can connect to the internet. Qualcomm sold these products at a price below cost to key customers with the intention of eliminating a competitor," she said. The fine represents 1.27 percent of Qualcomm's 2018 revenue. The EU had already fined Qualcomm $1.23 billion last year after concluding it bribed Apple to stifle competition.

Qualcomm said it plans to appeal Thursday's fine to an EU court and denied the charges. "This decision is unsupported by the law, economic principles or market facts, and we look forward to a reversal on appeal," Don Rosenberg, general counsel of Qualcomm, said in a statement.

"The Commission spent years investigating sales to two customers, each of whom said that they favored Qualcomm chips not because of price but because rival chipsets were technologically inferior," Rosenberg said.

Vestager said the opposite was true and that Qualcomm offered "very targeted price concessions" to two clients that were essential to Icera if it was to make a breakthrough in the market as Qualcomm's main contender from 2009 to 2011. "It was done on purpose to prevent Icera from gaining a foothold in the market," Vestager said.

Icera was bought up soon after and its chip business disappeared. Qualcomm has been the focus of an antitrust case in the U.S. as well, with media reports this week saying that the government asked a court to pause enforcement of an antitrust ruling.

In May, a U.S. federal judge ruled that Qualcomm unlawfully squeezed out cellphone chip rivals and charged excessive royalties to manufacturers such as Apple. The EU's fine against Qualcomm comes just a day after Vestager's office said it was investigating whether Amazon uses data from independent retailers to gain an unfair advantage, a decision that could lead to changes in how the internet's biggest marketplace works.

This week's moves echo similar antitrust actions against Google and Microsoft that have led to billions in fines. It also contrasts with U.S. lawmakers' slower approach to the issue, as they start discussing how to curb the growing power of the tech industry's titans.