The five other people were hospitalized after the collapse and all are expected to recover. 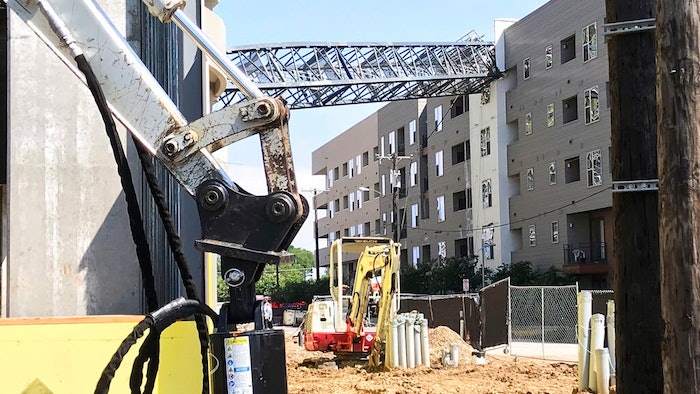 DALLAS (AP) — Residents in North Texas began to come to grips Monday with the widespread damage left after a sudden thunderstorm bearing near hurricane-strength winds rolled through the area and collapsed a crane onto an apartment complex, killing one person and injuring five others.

Wind gusts measuring as high as 71 mph (114 kph) blew out the windows of high-rise buildings and tore trees apart, taking power and telephone lines with them, especially in Dallas and its northern suburbs. The electric utility Oncor reported that 140,000 customers had service restored by nightfall Monday, but 210,000 still remained in the dark. In a statement, Oncor said some customers may not have service restored until Thursday. Crews from across Texas and some other states have been brought in to help in the restoration process.

Kiersten Symone Smith, 29, was pronounced dead at a hospital, according to the Dallas County Medical Examiners' office, after the construction crane smashed into a five-story building near downtown. The crane destroyed many apartments at the Elan City Lights complex and reduced parts of an adjacent parking garage to a pile of concrete and mangled cars.

Smith was a resident of the apartment building, her sister, Toni Smith, told The Associated Press in a brief interview Monday. Toni Smith referred other questions to attorney Jonathan Cox, who said he could not immediately provide answers but that the family intends to issue a statement. The cause of her death has not been determined.

Dallas Fire-Rescue spokesman Jason Evans said Monday that the five other people were hospitalized after the collapse and all are expected to recover. Two people were discharged Sunday; a 35-year-old man and 35-year-old woman remain hospitalized but have been upgraded from "critical" to "good" condition; and a 23-year old man remains in "serious" condition, Evans said.

Meanwhile, fire-rescue crews escorted residents of the apartment building briefly into their homes Monday to retrieve pets and some essentials as city workers and Occupational Safety and Health Administration officials ponder how to remove the crane embedded in the structure's east side. As of late Monday morning, almost 500 traffic signals were inoperable across Dallas, and about 170 were flashing red lights, according to the city.

Bigge Crane and Rigging Co., which owns the downed crane, had representatives in Dallas Monday to assist and cooperate with OSHA's investigation, said Randy Smith, the California-based equipment rental company's lawyer. He said the crane was "not in service" during the storm.

Another woman, whose identity has not been released, died Sunday when the sailboat she was in overturned on Eagle Mountain Lake, a few miles northwest of Fort Worth.

Meanwhile, a tornado graded by the National Weather Service as an EF-2 struck Copperas Cove, about 55 miles (89 kilometers) southwest of Waco, on Sunday with winds estimated at 115 mph. A city fire official said about 200 homes were damaged and three of those are uninhabitable.

"The sun was out, and then all of a sudden a wind came in, it got dark, the lights went off, and once the lights got off then the wind started blowing," Copperas Cove resident Erasmus Julien told the Killeen Daily Herald.