Tesla CEO Heads Down Perilous Road in Pursuit of Profit

Some critics have accused Musk of rolling out the autonomous vehicle plan to distract from Tesla's first quarter results. 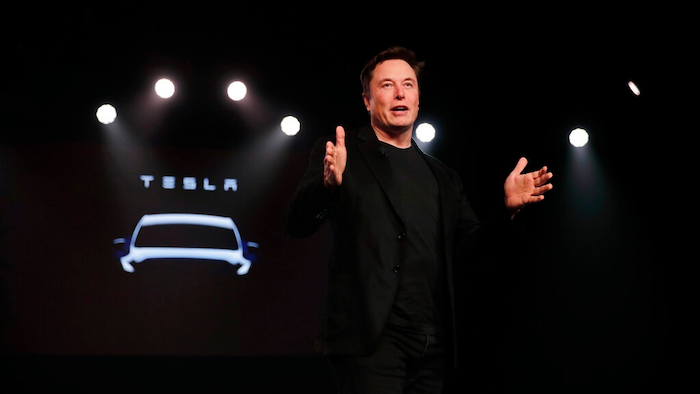 In this March 14, 2019, file photo Tesla CEO Elon Musk speaks before unveiling the Model Y at Tesla's design studio in Hawthorne, Calif. Musk appears poised to transform the company’s electric cars into driverless vehicles in a risky bid to realize a bold vision that he has been floating for years. The technology required to make that quantum leap is scheduled to be shown off to Tesla investors Monday, April 22, 2019, at the company’s Palo Alto, Calif., headquarters.
AP Photo/Jae C. Hong, File

Tesla has lost nearly $6 billion since setting out to revolutionize the auto industry 15 years ago, but CEO Elon Musk foresees a profitable future fueled in part by a ride-hailing service made up of electric cars driven by robots.

The mind-blowing concept is something Musk first outlined in a master plan three years ago, but now he believes Tesla's technology is capable to turning his dream into reality. And that terrifies some critics who worry Musk's plan to transport passengers in self-driving Teslas without a human to take control in emergencies will maim and kill people.

But if Musk can deliver on a promise that he made Monday to deploy self-driving vehicles and start the ride service next year, the business model might just work. And that could help Tesla finally put its long history of losses in its rear-view mirror.

In addition to selling its line of electric cars and solar panels for homes, Tesla would get 25% to 30% of the fares from owners who share their cars in Tesla's app-based ride service.

It would work something like this: Owners would be able to use an app to offer their cars as robotaxis, picking up cash by sharing vehicles when they're not in use. The income would offset the cost of the cars. Eventually steering wheels and brake pedals would go away and even the owners wouldn't have to drive when they need their cars.

Such a service "could conceivably boost demand for Tesla vehicles by highlighting some of the (autonomous vehicle) value unlock propositions," Citi analyst Itay Michaeli wrote Tuesday in a note to investors.

Musk's plan makes a lot of assumptions that self-driving experts insist are unlikely to happen. First, he's running counter to the rest of the industry, trying to put out autonomous vehicles with fewer sensors, relying largely on cameras and a fast new computer. Nearly all other companies add Lidar, a light beam sensor that can see 360 degrees in the dark. That is why critics have called Musk's plan too risky to pursue for many more years.

Also, passengers might not be ready to ride in autonomous Teslas by next year. A recent AAA poll found that 71% of Americans wouldn't feel safe riding in a robocar from any company.

Tesla may have played a role in that anxiety, given that its Autopilot driver-assist system has failed to stop Teslas from running into objects in their way, resulting in at least two deaths.

Some critics have accused Musk of rolling out the autonomous vehicle plan to distract from Wednesday's scheduled release of Tesla's first quarter results, which by all accounts are expected to be dismal.

With sales falling in the first quarter, the company is expected to lose more than $325 million.

"A cynic would say (Musk) is doing this to justify Tesla's stock valuation and nothing else," said Gartner analyst Mike Ramsey, who follows self-driving cars. "But that is part of the Tesla ethos. You have to believe in the story of tomorrow to justify the train wreck of today, which is usually its financial situation."

Another problem for Tesla is fading sales of its higher-priced models S and X as the vehicles age. Tuesday night, the company announced updates to both, including a new drive system that increases the range by 10% per electric charge. Long-range versions of the S will be able to go 370 miles per charge while the X can go 325, the company said. The vehicles also will get new adaptive suspensions, faster acceleration and more comfortable rides, Tesla said.

In addition to its penchant for losing money, Tesla also has accumulated massive debts that have raised doubts about its long-term viability.

Nevertheless, Tesla has a market value of $45 billion — higher than auto industry pioneer Ford Motor. That lofty assessment of Tesla's worth has largely been driven by the belief that Musk is a visionary along the lines of Apple co-founder Steve Jobs and Ford co-founder Henry Ford.

But more investors are starting to doubt both Musk and Tesla, one reason the company's stock price is about 30% below its peak reached 19 months ago.

Under Musk's ride-hailing plan, drivers wouldn't have to keep their hands on the wheel or worry about applying brakes beginning in the second quarter of next year. The autonomous ride service would start by the end of the year, although Musk acknowledged Monday that he has missed multiple deadlines in the past. If there were a wreck, Tesla probably would be liable, Musk said.

Current ride-hailing services such as Uber and Lyft that rely on human drivers cost $2 to $3 per mile, according to Musk. He estimates his robotaxis will cost less than 18 cents per mile, so they would be able to undercut the competition.

An owner, he figures, could make a $30,000 per year profit depending on how much a vehicle is loaned out in a network that's "sort of like a combination of maybe the Uber and Airbnb."

Like many of the plan's skeptics, Ramsey doubts it will ever happen. He says he expects Musk to continue to make improvements to Tesla's self-driving technology during the next 18 months, then blame regulatory red tape for preventing the company from rolling out its robotaxis.

But if Musk does dare to attempt to run a ride-hailing service consisting of Teslas that drive themselves, Ramsey said, he "will no doubt be going down his most dangerous road yet."