She said it feels awesome having so much extra time in space and "a true honor and a dream come true." 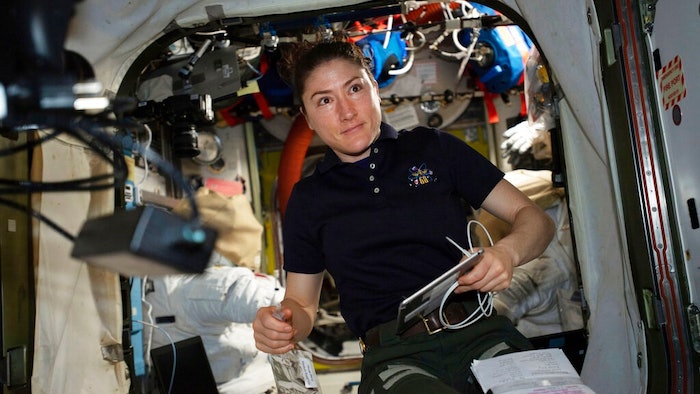 In this April 8, 2019 photo made available by NASA, astronaut and Expedition 59 Flight Engineer Christina Koch works on U.S. spacesuits inside the Quest airlock of the International Space Station. Koch will remain on board until February 2020, approaching but not quite breaking Scott Kelly’s 340-day U.S. record.
NASA via AP

CAPE CANAVERAL, Fla. (AP) — A NASA astronaut will spend nearly a year at the International Space Station, setting a record for women.

Station astronaut Christina Koch will remain on board for about 11 months, until February — approaching but not quite breaking Scott Kelly's 340-day U.S. record.

"One month down. Ten to go," she tweeted Wednesday. She said it feels awesome having so much extra time in space and "a true honor and a dream come true."

Koch knew before launching last month that her flight might stretch into 2020 and sought advice from Kelly as well as retired astronaut Peggy Whitson, the current record-holder for female space fliers.

Koch will break Whitson's 288-day record for the longest single spaceflight by a woman at the end of December.

"I hope that me being up here and giving my best every day is a way for me to say thank you to people like her," Koch said in a NASA interview broadcast Wednesday.

Koch said before launching, she and her husband listened to an audio recording of Kelly's 2017 autobiography, "Endurance." She said there was a lot of helpful advice.

An electrical engineer who's worked in Antarctica, Koch will undergo medical tests during her stay. More subjects and more diversity are needed, she noted, to better understand the effects of long-term spaceflight as NASA aims to return astronauts to the moon within five years.

"It's almost turning into not that big of a deal to have somebody on board station for 10, 11 months because we've done it before, we're good at it and we're going to keep doing it," she said.

Koch was supposed to become part of the first all-female spacewalking team, but instead ventured out a few weeks ago with a male crewmate. Only one usable medium spacesuit was available, and the two women on board both needed mediums.

Another NASA astronaut also will have an extended stay. Dr. Andrew Morgan will launch to the space station this summer for a nine-month mission — also considerably longer than the usual six months. The physician and Army officer will lift off from Kazakhstan with an Italian and a Russian on July 20, the 50th anniversary of the first manned moon landing.

Both Koch and Morgan are part of NASA's Astronaut Class of 2013, the first to have a 50-50 split between women and men.

NASA announced the extended assignments this week. The primary reason for the schedule shuffling is to free up a seat on a pair of Russian Soyuz spacecraft for the United Arab Emirates' first astronaut, Hazza al-Mansoori. He will spend just over a week in orbit this fall.

Kelly returned to Earth in 2016 and Whitson in 2017. Both are now retired from NASA.

The Associated Press Health and Science Department receives support from the Howard Hughes Medical Institute's Department of Science Education. The AP is solely responsible for all content.

Last Astronaut to Walk on the Moon Dies at 82