If you do get into an accident, the resulting repairs can add up to about $3,000 in extra repair costs. 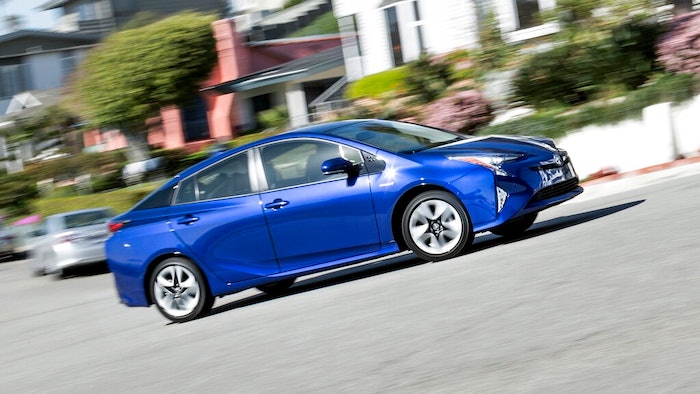 This undated photo provided by Edmunds shows the 2016 Toyota Prius, an example of a late-model vehicle that comes with advanced safety features. These features are useful but can lead to increased repair costs should the vehicle get damaged in an accident.
Scott Jacobs/Edmunds via AP

Vehicle safety technology continues to evolve at a rapid pace. Today's cars can watch your blind spot, help keep you in your lane, automatically hit the brakes in an emergency, and more. But while the technology helps prevent accidents, there is a potential side effect: increased repair costs.

These technology features in new vehicles typically rely on sensors and cameras that are mounted on relatively exposed parts of a vehicle, such as bumpers and windshields. If you do get into an accident, the resulting repairs can add up to about $3,000 in extra repair costs, according to a recent AAA study.

We experienced this firsthand after a parking lot fender-bender left what appeared to be minor scratches on Edmunds' 2016 Toyota Prius long-term test vehicle. A visit to the body shop, however, revealed that the damage was more substantial.

Not too long ago, an incident such as ours could be fixed for roughly $1,000 in total. Sand down the old bumper, add some Bondo as filler, repaint it and you're done. Nowadays, the repair is more complicated.

After the incident, our Prius had deep paint scratches on its bumper and persistently displayed the "Blind-Spot Monitor Malfunction" warning light. We took it to a local Toyota dealership in Los Angeles since the damage was minor — or so we thought.

The dealership pointed out that the damage was more extensive. The blind-spot sensor needed replacing, and the sensor bracket, which is welded to the frame, was damaged and out of alignment. The replacement sensor had a price tag of $1,000, and it needed to be calibrated. This fix would cost an additional $465 and take about three hours to complete.

The dealer suggested we contact a body shop to address the bent bracket and the cosmetic damage to the rear bumper. That's where we learned of another repair issue. In some vehicles equipped with blind-spot monitors, manufacturers now use a thinner layer of paint on the bumper so the paint won't interfere with the sensors. This special paint job makes it more difficult for a repair shop to fix and repaint. In many cases, a repair shop will opt to put on a new bumper rather than repair the old one.

Ultimately, we had two options for our Prius: 1) fix the blind-spot monitoring system and leave the scuffed bumper, costing us $2,384, or 2) do the repairs with a new bumper for a staggering $4,339.

Windshields and bumpers are two of the most common body repairs, and safety system calibration is a consistent cost factor in those repairs. Even one degree out of alignment can cause significant problems, according to body repair experts.

Windshield damage accounts for more than 14.5 million replacements annually, according to AAA, with some automakers requiring the use of factory glass that meets strict standards for optical clarity. Plus, many safety systems that rely on cameras positioned behind the windshield require recalibration when the glass is replaced.

This calibration can cost roughly $1,500, which can be as much as three times the amount to replace the windshield on a car without the technology. Add another $850 to $1,900 if the front camera sensors ? used with automatic emergency braking adaptive cruise control, lane departure warning and lane keeping systems ? need to be replaced.

Finally, rear radar sensors used in bumpers with blind-spot monitoring and rear cross-traffic alert systems can add $850 to $2,050 in repair costs, according to AAA.

WHAT ARE MY OPTIONS?

If you are relying on a safety feature that is not functioning correctly, then you are putting yourself and your occupants in danger. It will also affect the trade-in and resale value of your vehicle. Even if you replaced your bumper, you can't hide the warning lights.

One option might be to drive an older vehicle without the expensive safety technology. On modern cars, however, there's really no way around it. You have to go into it knowing that you will end up paying more for repairs, whether out of pocket or through insurance, where it may increase your premiums. It is just a sign of the safer, yet more expensive, times we live in.

EDMUNDS SAYS: Advanced safety features are becoming a standard fixture integrated into vehicles. They help prevent accidents, which could save you money. But if you do get into a seemingly minor accident, make sure you are prepared to pay double, or even triple, the amount of a basic automobile repair.